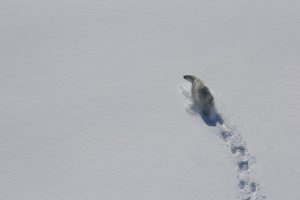 A polar bear in Baffin Bay, West Greenland in 2012 seen from the air. Photo Credit: Kristin Laidre, University of Washington

Polar bears are spending more time on land than they did in the 1990s due to reduced sea ice, new University of Washington-led research shows. Bears in Baffin Bay are getting thinner and adult females are having fewer cubs than when sea ice was more available.

“Climate-induced changes in the Arctic are clearly affecting polar bears,” said lead author Kristin Laidre, a UW associate professor of aquatic and fishery sciences. “They are an icon of climate change, but they’re also an early indicator of climate change because they are so dependent on sea ice.”

The international research team focused on a subpopulation of polar bears around Baffin Bay, the large expanse of ocean between northeastern Canada and Greenland. The team tracked adult female polar bears’ movements and assessed litter sizes and the general health of this subpopulation between the 1990s and the period from 2009 to 2015.

Polar bears’ movements generally follow the annual growth and retreat of sea ice. In early fall, when sea ice is at its minimum, these bears end up on Baffin Island, on the west side of the bay. They wait on land until winter when they can venture out again onto the sea ice.

When Baffin Bay is covered in ice, the bears use the solid surface as a platform for hunting seals, their preferred prey, to travel and even to create snow dens for their young.

“These bears inhabit a seasonal ice zone, meaning the sea ice clears out completely in summer and it’s open water,” Laidre said. “Bears in this area give us a good basis for understanding the implications of sea ice loss.”