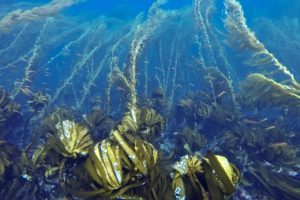 ” Sea palms and giant kelp lean into the current off the coast of Santa Cruz Island as señorita fish dart between the fronds.” Photo Credit: Sarah Sampso/ Brandon Doheny

Anyone who’s read “The Lorax” will recognize that certain species serve as the foundation of their ecosystems. When the truffula trees disappear, so to do the swomee-swans and bar-ba-loots. However, the same is not necessarily true the other way around.

Scientists have taken a growing interest in ecological stability — the factors that make an ecosystem robust against pressures and perturbations — especially in light of human impacts like climate change and pollution. Though many presume that the stability of an ecosystem’s foundation species will promote stability overall, few have quantified this effect as of yet.

Researchers at UC Santa Barbara’s Marine Science Institute (MSI) have leveraged long-term ecological data to probe this question in Southern California’s kelp forests. They found a correlation between the stability of giant kelp and the stability in understory seaweed and seafloor invertebrates, such as sponges, as well as higher biodiversity over all. Their results appear in the journal Ecology.

A foundation species shapes its entire environment and defines an ecosystem. “The ecosystem in which they live is often named after them, like oyster beds, coral reefs, or redwood forests,” said Robert Miller, a research biologist at MSI and one of the paper’s coauthors. They generally provide the ecosystem’s physical structure or main source of food, and as such, have a strong effect on the species that live there.

“The fact that a foundation species, such as giant kelp, could promote the stability of the species for which it provides food and habitat might seem trivial,” said lead author Thomas Lamy, a postdoctoral researcher at MSI. “This was part of the original definition of a foundation species — which dates back to around 1972 — but had never been tested before.”

Read the article in Ecology: https://esajournals.onlinelibrary.wiley.com/doi/abs/10.1002/ecy.2987