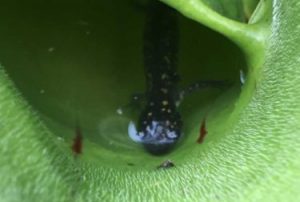 Call it the “Little Bog of Horrors.” In what is believed to be a first for North America, biologists at the University of Guelph have discovered that meat-eating pitcher plants in Ontario’s Algonquin Park wetlands consume not just bugs but also young salamanders.

In a paper published this week in the journal Ecology, the research team reports what integrative biologist Alex Smith calls the “unexpected and fascinating case of plants eating vertebrates in our backyard, in Algonquin Park.”

Pitcher plants growing in wetlands across Canada have long been known to eat creatures – mostly insects and spiders — that fall into their bell-shaped leaves and decompose in rainwater collected there.

But until now, no one had reported this salamander species caught by a pitcher plant in North America, including Canada’s oldest provincial park, a popular destination where the plants have been observed for hundreds of years.