An island haven for frogs 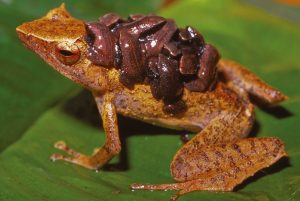 Many frogs found only in New Guinea may be at risk from the invasive chytrid fungus. Photo: PHOTO CREDIT: Stephen J Richards

New Guinea is one of the only places in the world where frogs are safe from the species-destroying chytrid fungus. An international team of scientists has published a new paper that shows how to keep it that way, but they need help to carry out their plan.

The chytrid fungus has wiped out more than 90 frog species around the world, and it’s driving hundreds more towards extinction. New Guinea – the world’s largest tropical island, and home to 6% of all known frog species – is one of the last remaining refuges from the deadly infection.

A team of scientists led by researchers from Macquarie University and the University of New England in Australia think they know how to keep the island’s frogs safe, but they need support to establish a long-term program of monitoring and conservation.