January research news from the Ecological Society of America 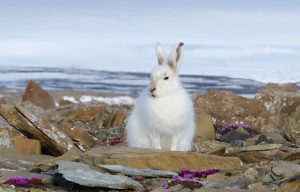 Researchers conducting a study of the polar desert ecosystem surrounding Canadian Forces Station Alert (at the northeastern tip of Ellesmere Island in Nunavut, Canada) tracked 25 Arctic hares to better understand their seasonal movement patterns. Movement and migration distances of pikas, rabbits and hares (lagomorphs) rarely exceed a few tens of kilometers, so researchers tend to dismiss the possibility of large-scale movements in Arctic hares – even though seasonal disappearances of hares have been observed at high latitudes in the past. This research team was surprised, then, to find that one female Arctic hare – named BBYY – traveled a minimum cumulative distance of 388 kilometers over 49 days, the longest journey ever recorded for any rabbit, pika or hare.

Read the article: Unsuspected mobility of Arctic hares revealed by longest journey ever recorded in a lagomorph

Outdoor activities such as birding have increased in popularity during the COVID-19 pandemic, leading to an increase in participation with eBird and other community science efforts. However, the pandemic also disrupted field research programs that provide crucial data for waterfowl managers who set harvest regulations for hunters. In response to this unique challenge, researchers from the U.S. Geological Survey, U.S. Fish and Wildlife Service, and the Cornell Lab of Ornithology developed a method for forecasting mottled duck population size along the Gulf Coast in Louisiana and Texas using a combination of traditional aerial surveys and eBird community science data. Mottled ducks have been declining in population size throughout much of their native range since the 1960s, but it is difficult to obtain accurate population size estimates, since many waterfowl species shift their territories in response to changes in the location of habitat (e.g. due to land-use change and extreme climate events). By integrating community science data, the researchers obtained relatively precise population size estimate, even when the COVID-19 pandemic disrupted traditional surveys.

Read the article: Leveraging community science data for population assessments during a pandemic 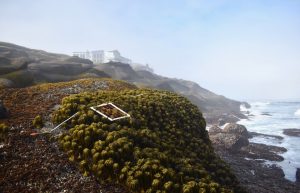 A rocky intertidal research plot with a transect and quadrat laid over a Postelsia palmaeformis patch. Photo courtesy of Barbara Spiecker.

The 2015–2016 season brought the historically third-most severe El Niño event to the Oregon coast, increasing air and water temperatures toward the upper threshold of the thermal tolerance range of intertidal kelp species, which sustain marine biodiversity along the U.S. West Coast. El Niño events are predicted to occur more frequently as global temperatures continue to rise, as are marine heatwaves, which compounded the effects of El Niño between 2014 and 2016. Researchers analyzed the effects of El Niño and marine heatwaves on three intertidal kelps at seven sites across 300 km of the Oregon coast and over three years after the 2015–2016 El Niño. Kelp performance declined immediately after these events and increased over time. However, localized factors such as coastal upwelling, which pulls nutrient-rich waters upward from below the warmer surface water, meant that shifts in kelp performance varied from cape to cape. 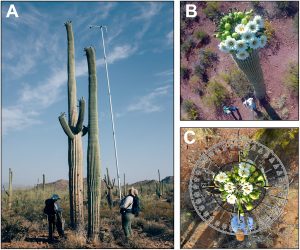 Photographing the top of a saguaro using an extendable flagpole with a camera mounted on top and connected wirelessly to a tablet (A and B). Photograph of saguaro crown with compass superimposed, used to determine the ordinal direction of buds and flowers (C). Photographs courtesy of the National Park Service.

A new paper is the first to describe the unique flowering pattern of saguaro cacti. The species’ blooms emerge facing the east, sequentially appearing in a counterclockwise direction — and may be the only flowering plant to do so. Researchers tracked 20 saguaros and measured 2372 flowers across two reproductive seasons in Saguaro National Park, Tucson, Arizona. The saguaro cactus is considered a keystone species, supporting at least 100 additional species across the Sonoran Desert, and these findings provide new avenues for future research on how saguaros and related species are responding to the changing climate.

Barred owls have expanded their range from eastern North America toward western forests over the past several decades, posing a threat both to the spotted owls in the West, and to the region’s broader biological communities. Researchers from the University of Wisconsin pinpointed the Sierra Nevada as an invasion front where removing barred owls would be likely to result in spotted owl recolonization, and convened a stakeholder group representing academic researchers, state and federal agencies, and private industry to work on averting spotted owl population declines. Their efforts resulted in a pronounced decline in barred owl occupancy in the area, and a total of 56% recolonization of spotted owls across 15 territories within one year of barred owl removals.

Read the article: Arresting the spread of invasive species in continental systems