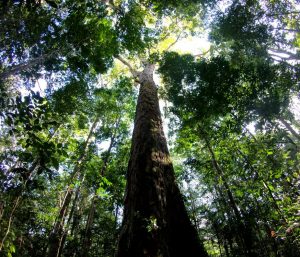 Sometimes even the largest natural wonders can remain hidden from human view for centuries. The Amazon is a dense place, full of life with new species of flora and fauna being discovered every other day. Now, using the same technology that takes driverless cars from A to B, we – led by Eric Gorgens and Diego Armando da Silva, and along with colleagues from Brazil, Swansea, Oxford and Cambridge – have discovered the tallest tree in the rainforest.

At 88m tall, it dwarfs the previous record holders by almost 30m. And it’s not alone either. The Guiana Shield of north-eastern Amazonia, which accounts for nearly 9% of the world’s remaining tropical forests, may contain lots of these gigantic trees. With each one able to hold as much carbon as an average hectare of rainforest, our discovery means that the vast jungle may be a greater carbon sink than previously thought.