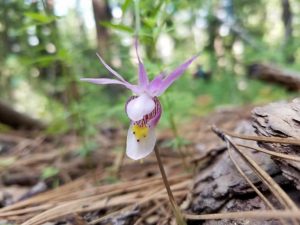 When Jaime Yazzie began planning her research for her forestry thesis, her adviser asked her what species of trees she wanted to save. They would use a computer simulation to measure the effects of a warming, drying environment, and she needed to select which trees to preserve.

“I was a little shocked,” Yazzie said. “In my mind, they’re one big family. To lose one would be like losing a sibling.”

Yazzie, who is Diné, took a different approach with her research. Instead of looking at which trees they could keep or lose, she applied her experiences and priorities as a Native American researcher and asked what society could change so the whole forest, in all its interconnectedness of species, land and people, could adapt as their environment changed. It was born out of the Navajo concept of K’é, or kinship, and the belief that people’s relationship to the forest ecosystem was as powerful and necessary to preserve as people’s relationships to each other.

What stemmed from that “light bulb moment” was a research project that combined western science and modeling tools with Indigenous knowledge and bringing voices into a conversation that haven’t always been considered. Yazzie’s research, “Dine kinship as a framework for conserving native tree species in climate change,” was published in July in Ecological Applications. The other authors are forestry professors Peter Fulé, Yeon-Su Kim and Andrew Sánchez Meador.