Giant Tortoises Migrate Unpredictably in the Face of Climate Change

Unlike many migratory species, Galapagos giant tortoises do not use current environmental conditions to time their seasonal migration 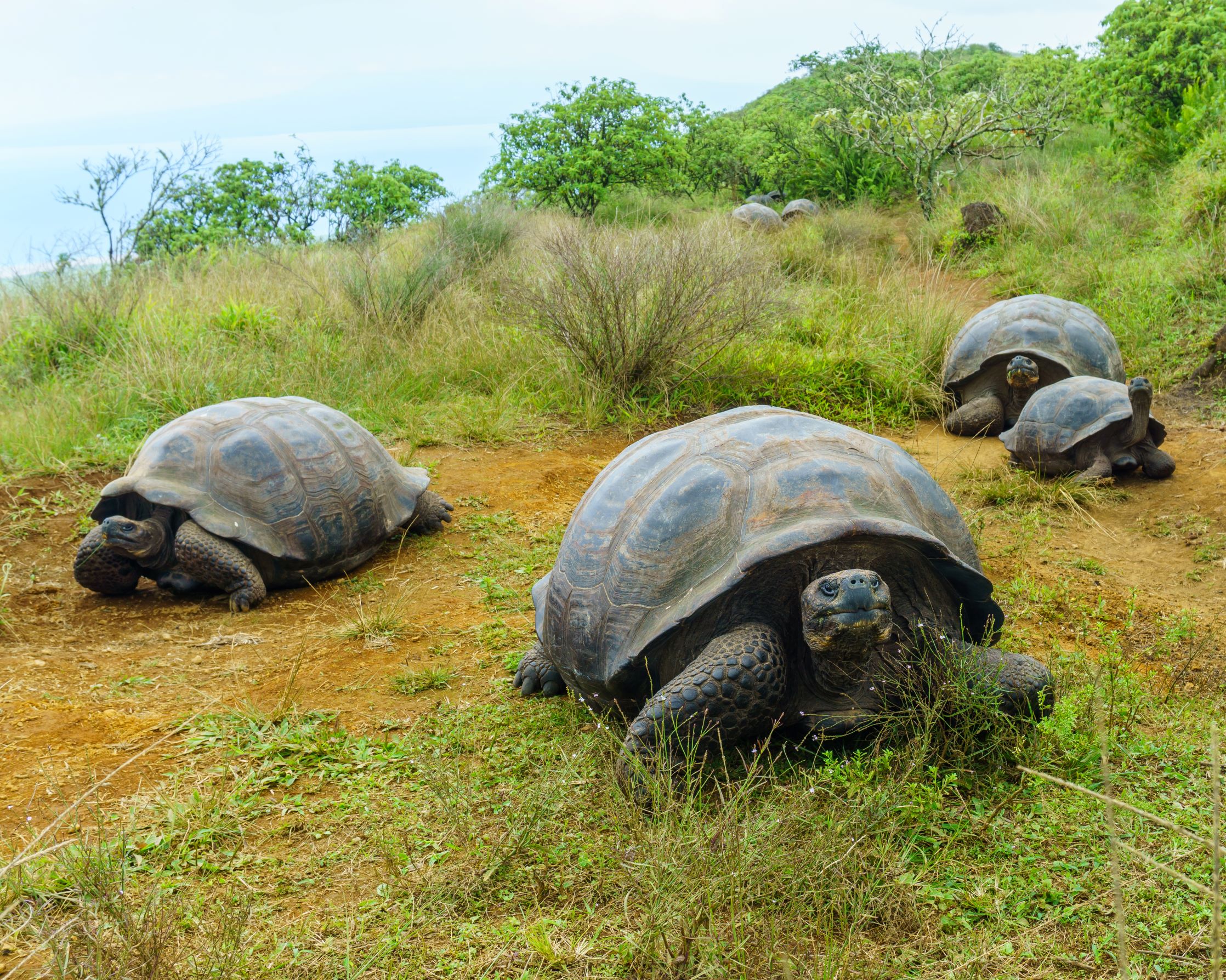 Galapagos giant tortoises are sometimes called Gardeners of the Galapagos because they are responsible for long-distance seed dispersal. Their migration is key for many tree and plant species’ survival. Photo courtesy of Guillame Bastille-Rousseau.

Galapagos giant tortoises, sometimes called Gardeners of the Galapagos, are creatures of habit. In the cool dry season, the highlands of the volcano slopes are engulfed in cloud which allows the vegetation to grow despite the lack of rain. On the lower slopes, however, there is no thick fog layer, and vegetation is not available year round. Adult tortoises thus spend the dry season in the higher regions, and trek back to the lower, relatively warmer zones where there is abundant, nutritious vegetation when the rainy season begins.

The tortoises often take the same migration routes over many years in order to find optimal food quality and temperatures. The timing of this migration is essential for keeping their energy levels high, and climate change could disrupt a tortoise’s ability to migrate at the right time.

In the Ecological Society of America’s journal Ecology, researchers use GPS to track the timing and patterns of tortoise migration over multiple years.

“We had three main goals in the study,” says Guillaume Bastille-Rousseau, lead author of the paper. “One was determining if tortoises adjust their timing of migration to current environmental conditions. Two, if so, what clues do they use to adjust the timing, and, three, what are the energetic consequences of migration mis-timing for tortoises?”

The researchers expected the migrations to be timed with current food and temperature conditions because many other migratory species operate that way. Bastille-Rousseau says “many animals, such as ungulates, can track current environmental conditions and migrate accordingly – what researchers sometime refer to as surfing the green-wave.”

Contrary to the researchers’ expectations, however, migration is weakly associated with current conditions such as fog, rain, and temperature. For instance, if it is unseasonably arid, it appears the tortoises do not take that variation into account when deciding it is time to migrate. It is unclear at this point whether they are basing their migration decisions on memories of past conditions or if they are simply incorrectly assessing current local conditions. 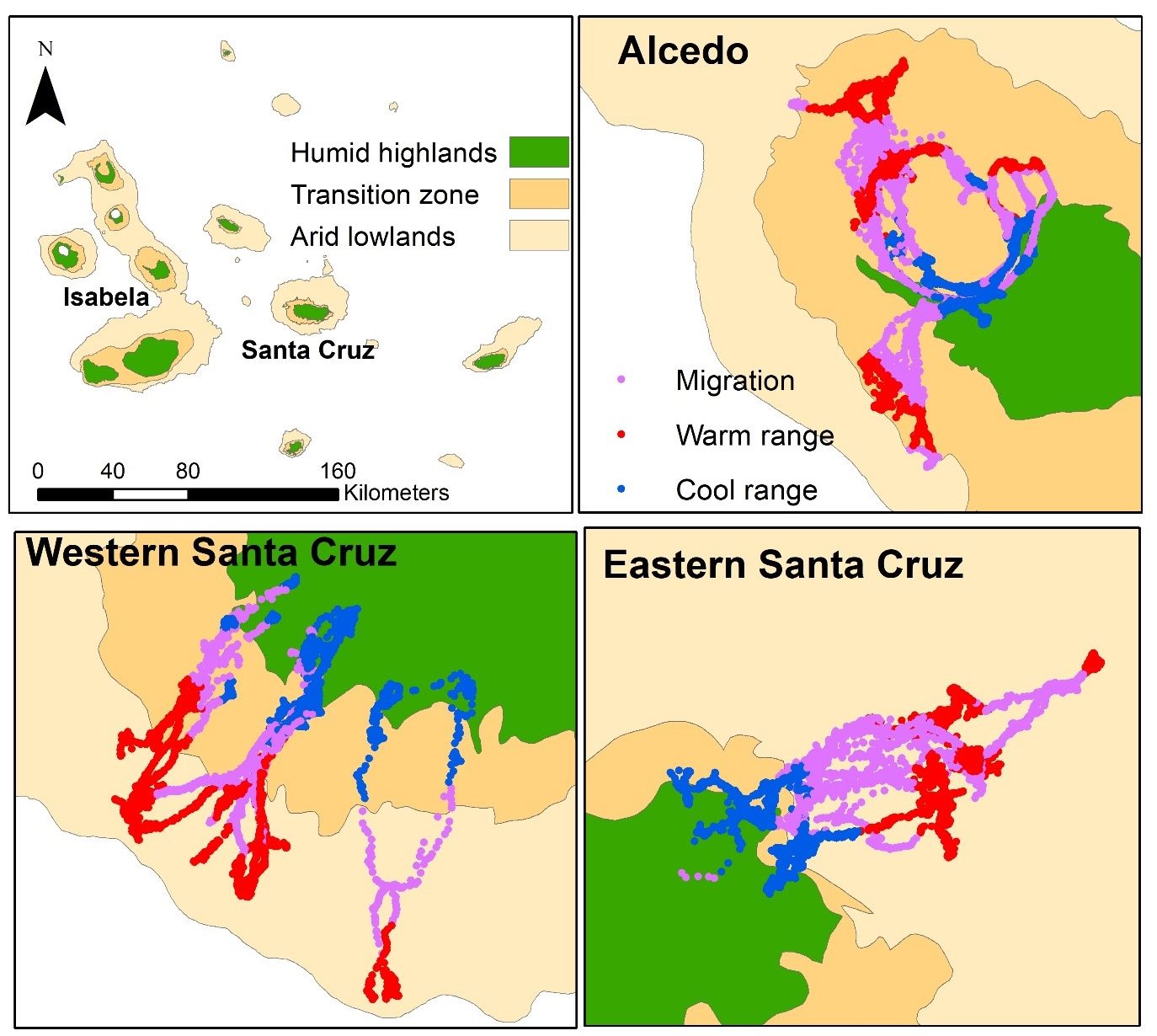 Galapagos giant tortoises migrate from arid lowlands to foggy, cooler uplands during the dry season to find more consistent, if not as nutritious, vegetation. Image courtesy of Guillame Bastille-Rousseau.

Bastille-Rousseau says the team is surprised by the mismatch, stating “tortoise timing of migration fluctuated a lot among years, often by over two months. This indicates that migration for tortoises may not just be about foraging opportunities. For example, female tortoises have to make decisions related to nesting, and we still have a lot to learn about migration in giant tortoises.”

Fortunately, this sub-optimal timing may not yet have critical impact on tortoise health. Potentially due to their long lives of up to 100 years and large body size, bad timing of migration has smaller consequences for giant tortoises compared to small, short lived animals. Giant tortoises can go up to a year without eating and survive, while other migrating species must eat more regularly to sustain their energy levels.

Giant tortoises are important ecosystem engineers in the Galapagos, responsible for long-distance seed dispersal, and their migration is key for many tree and plant species’ survival. How the tortoises’ variation in migration timing will affect the rest of the ecosystem is still unclear. Because tortoises do not seem to be tracking annual variation in environmental conditions, it is quite possible that the mistiming of migration will keep increasing in the future.

“One concern is that at some point in the future,” Bastille-Rousseau adds, “migration may not be an optimal strategy for tortoises. There may be a reduction in the number of individuals doing these long-distance movements. This would likely have cascading consequences for the whole ecosystem.”

The Ecological Society of America, founded in 1915, is the world’s largest community of professional ecologists and a trusted source of ecological knowledge, committed to advancing the understanding of life on Earth. The 9,000 member Society publishes five journals and a membership bulletin and broadly shares ecological information through policy, media outreach, and education initiatives. The Society’s Annual Meeting attracts 3000-4,000 attendees and features the most recent advances in ecological science. Visit the ESA website at https://www.esa.org.