Routes out of isolation for Yellowstone grizzlies

Montana scientists project pathways to wider mating pools in the Northern Rockies, based on characteristic movements of male bears 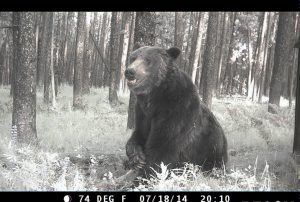 A male grizzly bear caught on remote camera in Beaverhead-Deerlodge National Forest in Montana on 18 July 2014. The site is within northwestern lobe of the Yellowstone Greater Ecosystem, the Yellowstone bears’ occupied range. Remote camera traps are one way to verify sightings of grizzly bears exploring new landscapes, outside of the occupied range. Credit: USGS-IGBST.

In the summer of 2017, biologists from Montana Fish, Wildlife and Parks confirmed sightings of a grizzly bear in the Big Belt Mountains northeast of Helena, Montana. The bear, an adventurous vanguard from its home range in the Northern Continental Divide Ecosystem of northwestern Montana, could be an unwitting pioneer on a path that may one day bring grizzlies from the Northern Continental Divide face to face with cousins long isolated in Yellowstone, say an interagency team of Montana and Wyoming biologists.

They report their results in an article published today in the Ecological Society of America’s open access journal Ecosphere.

Drawing from rich data on the movements of male bears in both grizzly populations, the researchers projected the rambles that future bears might take to pass through (or bypass) human occupied territory around Helena, Butte, and Bozeman, hopping between islands of wildlands in developed farm and rangeland. The bears’ best options may be the longest routes, the researchers say, traversing state and federally owned wildlands in a westward arc around the more developed Interstate 90 corridor.

“We let the male bears tell us where they would be most likely to go, by looking at their movement characteristics. We had the luxury of huge datasets of location data from both populations. We could be very picky about our data selection,” said Frank van Manen, team leader for the Interagency Grizzly Bear Study Team. He coauthored the study with seven colleagues from Montana Fish, Wildlife and Parks, Wyoming Game and Fish, and his own home agency, the U.S. Geological Survey (USGS).

Increasing public interest in a reunion of the Yellowstone and Northern Continental bear families motivated van Manen and colleagues to look at the possible paths the bears might take. An influx of genetic diversity through breeding with outsiders could give the Yellowstone grizzly population greater resiliency to changing environmental conditions. 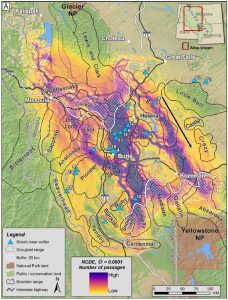 Potential paths for male grizzlies from the Northern Continental Divide Ecosystem to the Greater Yellowstone Ecosystem, generated by a randomized shortest path algorithm based on data from 124 GPS-collared males monitored from 2000 to 2015. Factors that may predict bear movements include vegetation type, density of houses, ruggedness of terrain, and distance to forest edges, roadways, and rivers.
Overlapping predictions from the algorithm (purple) indicate a convergence of pathes, often because path options are limited due to human influence on the landscape. A scattered proliferation of paths (yellow) through a region suggests that it offers more continuous grizzly habitat.
Blue triangles mark verified sightings of grizzlies outside their occupied ranges (Number 19 marks the bear documented in the Big Belts in the summer of 2017). From Figure 3 of the paper.

“We’ve been asked for this information by many groups invested in grizzlies. Organizations involved in land conservation want to know where land purchases will be most useful. Government agencies need to know where to put in place education efforts,” said coauthor Cecily Costello, a research wildlife biologist at Montana Fish, Wildlife and Parks in Kalispell.

“There were routes that were not obvious before we started, and a lot more alternatives than we thought initially,” van Manen said. The predicted routes matched well with 21 verified sightings of grizzly bears outside their usual ranges, like the bear seen in the Big Belts this summer (number 19 on the accompanying map). Sightings extend back to 1998, but most occurred in the last two years.

But trekking south towards Yellowstone through the Big Belts could be a relatively constrained and precarious route for bears, hemmed in by private land in low-lying valleys harboring highways, ranches, farms, and urban centers. Map visualizations of the models emphasize where corridors for the bears are narrowest. Overlapping predictions from the model indicate a tight squeeze for the bears, with few optimal paths. A scattered proliferation of paths through a region suggests that it offers more continuous habitat.

“On the western edge there is more natural habitat, fewer humans. Paths are more diffuse, and longer, but those routes are much more secure. If bears were to go in those directions they would be much less vulnerable to mortality,” van Manen said. But any crossing would likely take several years to complete, he said.

Long term monitoring of the Yellowstone and Northern Continental grizzlies provided the researchers with a wealth of data on bear movements. They trained their model on data from 124 males carrying GPS transmitters, collected from 2000 to 2015 (199 bear-years), tracking how bears move, how far and how quickly they travel, the habitats and physical features they favor, and how they exploit and explore the landscape. Female bears typically set a home range near their mothers. The researchers looked only at the movements of male bears, which range more widely than females and are more likely to make the crossing of no-bears-land.

“The sightings data validated the models. Also interesting, looking at the pattern of bear observations, is that most were likely from bears that originated in the Northern Continental Divide Ecosystem. Based on the data from both observations and modeling, it seems that an immigrant coming from the north is the more likely scenario, which is good, because that is what we want. That is what is needed,” van Manen said.

Establishing a natural genetic exchange between the populations, without resort to relocation of animals, is a top priority for many people invested in the recovery of grizzly bears, and a long-term management goal for the state of Montana.

But expansion will take the bears onto private land, and lead to encounters with dangerous highways. With more human dominated landscapes comes the potential for conflicts with people.

“The dispersing males, they are the ones that get in trouble, that get into the garbage, that roam into town, because they are more exploratory,” van Manen said.

Preparing people to coexist with bears may be as important as securing conservation easements, said van Manen and Costello. Bear-proof garbage storage systems and electric fences around beehives can minimize conflicts with people and go a long way towards securing a safe path for the bears. Costello would like to look at potential highway crossings, to investigate ways to mitigate collisions with vehicles. But she emphasizes that the models represent movement corridors. The projected paths, particularly where they cross more developed low country, do not necessarily indicate where bears would set up permanent residence.

Grizzly bears generally prefer to be where people are not. Though they are adaptable to a wide variety of habitats and diets, they need a lot of undeveloped space. The domestication of the West during the twentieth century pushed grizzlies out of most of the lower 48 states, isolating a small population of bears in the haven of Yellowstone, the United States’ first national park, and in the remote northwest corner of Montana. The Yellowstone bears were among the first animal populations protected by the Endangered Species Act, in 1975. They thrived under the act’s protection, expanding from a group of perhaps fewer than 250 bears in the early 1980s to over 700 today, and spilling outside the park into adjacent federal forested lands. The grizzlies now roam over 65,000 square kilometers (25,000 square miles) of the Greater Yellowstone Ecosystem, with only about a fifth of the population inside the national park at its core.

The U.S. Fish and Wildlife Service removed the Yellowstone grizzlies from threatened species protection under the Endangered Species Act in June, 2017.

The bear population in the Northern Continental Divide, still listed as threatened, has grown on a similar trajectory. This group, which is about 1,000 bears strong, inhabits Glacier National Park and adjacent National Forests, connecting northward to grizzly populations in Canada. At the outermost edges of its range, only 110 kilometers (68 miles) separate it from the Yellowstone population.

“110 kilometers is right on the cusp of what we might see in the dispersal patterns of males. We are within the realm of immigration events happening naturally,” van Manen said. 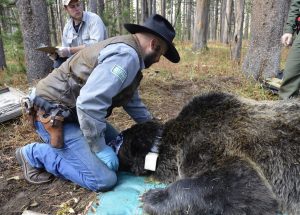 Global Positioning System tracking: Chad Dickinson, a biological science technician with the Interagency Grizzly Bear Study Team, fits a GPS collar on a male grizzly bear in Yellowstone National Park. The authors of the current study used GPS telemetry data from males like this one to predict the behavior and habitat selection of bears exploring landscapes outside the Greater Yellowstone Ecosystem, on journeys that could bring them into contact with breeding grizzly populations in the Northern Continental Divide Ecosystem, and vice versa. Credit: Frank van Manen.

The Interagency Grizzly Bear Study Team (IGBST) is an interdisciplinary group of scientists and biologists responsible for long-term monitoring and research efforts on grizzly bears in the Greater Yellowstone Ecosystem (GYE), formed by the Department of the Interior (DOI) in 1973. IGBST members are representatives from the U.S. Geological Survey, National Park Service, U.S. Fish and Wildlife Service, U.S. Forest Service, the Eastern Shoshone and Northern Arapaho Tribal Fish and Game Department, and the States of Idaho, Montana, and Wyoming. This interagency approach ensures consistency in data collection and allows for combining limited resources to address information needs throughout the GYE.