As climate change brings new pressures to bear on wildlife, species must “move, adapt, acclimate, or die.” Erik Beever and colleagues review the literature on acclimation through behavioral flexibility, identifying patterns in examples from invertebrates, amphibians, reptiles, birds, mammals, and fishes, in the cover article for the August issue of the Ecological Society of America’s (ESA) journal Frontiers in Ecology and the Environment. The authors focus on the American pika (Ochotona princeps) as a case study in behavioral adaptation.

Beever will explore factors that define the pika’s distribution on Tuesday, August 8 at the ESA’s 2017 Annual Meeting, held this year in Portland, Oregon.

“Pikas inhabit a vast and diverse geographic range,” said Beever, a researcher for the U.S. Geological Survey’s Rocky Mountain Science Center in Bozeman, Montana. “However, they usually don’t like to travel far.”

Puff and lounge thermoregulation. American pikas can their moderate body temperature through posture (to some degree), squeezing into a fluffy ball, a body posture with minimum surface area, to hold in heat in winter (left), or stretching out the surface area of their bodies to cool down in summer (right). In recent years, pikas have been observed modifying their foraging habits in ways that may be behavioral adaptations to a changing climate.
Credit, J. Jacobson, from figure 4 of EA Beever et al (2017) Front Ecol Environ doi: 10.1002/fee.1502.

American pikas typically live high on the damp, rocky slopes of North America’s western mountains, from the dry peaks of Nevada and New Mexico to the wet coastal mountains of the Pacific Northwest. Yet pikas are homebodies, rarely traveling a kilometer from their rocky abode. As a consequence, pika populations are often inbred to an unusually high degree.

The combination of expansive range and frequently distinct populations makes the pika a good model species for the study of localized, idiosyncratic responses to diverse and changing environmental conditions, Beever said.

Behavioral responses, which can be rapid compared to shifts in range, may serve as early warnings of climate impacts on species. Shifting mating seasons or migrations are common behavioral adaptations to the temperature, precipitation, humidity, wind, and other changes encompassed by climate change. Animals also adjust strategies for feeding, foraging, avoiding predators, and sheltering from inclement weather. Behavioral solutions, however, are limited by physiology, and sometimes incur costly trade-offs with other essential activities. An animal that spends the day in a rock crevice, sheltering from the sun, does not have enough time to forage. So changes in behavior alone are unlikely to be sufficient to adapt successfully to the predicted changes in climate over the next century.

The pika typically inhabits high alpine rock piles at the bases of cliffs or chutes, known as talus. Although it looks a bit like a hamster, the pika is most closely related to rabbits and hares. In the summer, this tiny, tailless mammal stocks its rock home with grasses and flowers, creating, and assiduously defending, a “haypile” to eat during the long winter. The pika can moderate its body temperature by squeezing into a fluffy ball to hold in heat, or stretching out to cool down. In California and Nevada, pikas often spend the hottest hours of a summer day resting beneath rocks, out of the sun.

Patterns of behavioral responses represented in the literature. Studies in the literature search that documented behavioral response to climate variability (n = 186) were classified with respect to: (a) the class of behavior modified in response to climate, (b) the climatic stimulus apparently eliciting a response, (c) the taxonomic classification of organisms exhibiting behavioral responses, (d) the average lifespan of species with responses, and (e) the timescale over which the climatic stimulus caused the animal to change its behavior. In (a), the gray wedge comprises all studies in which the behavior was an aspect of phenology; these behaviors are more-finely parsed and classified in the smaller pie chart. Figure 1 of EA Beever et al (2017) Front Ecol Environ doi: 10.1002/fee.1502. Credit, ESA.

In recent years, pikas have been observed caching haypiles in downed logs and dead snags, and visiting lake shores, more than 100 meters from their typical talus slopes. In the Columbia River Gorge, which lies at an unusually low altitude for the species, pikas make much greater use of the dense forest neighboring their talus patches than do their brethren higher on the slopes of nearby Mt. Hood. On hot days there, the pikas may prefer the refuge of the shady forest to the open talus slopes. Columbia residents also eat large amounts of moss, which is abundant year-round in the wet, relatively warm river gorge.

Pikas living in the Great Basin have not shown this level of flexibility in their habitat, which may be a factor in the observed shrinking distribution of the pika in that part of its range.

At the ESA’s 2017 Annual Meeting, Beever will talk about factors that define the pika’s distribution in different parts of its geographic range, which encompasses substantially different ecosystems. Local climate is an important constraint on where the pika can survive and thrive. The relative influence of different climatic factors in shaping species distributions and range edges, varies over small distances, such as the upper and lower altitude bounds of a species’ niche. Beever and his colleagues are working to understand and model these localized effects on animals like the pika, with the aim of providing information on a fine-grained scale applicable to wildlife management.

COS 35-1 – Do climatic constraints on American-pika distribution vary spatially, and if so, how? Tests of common SDM assumptions, and novel approaches to improve modeling 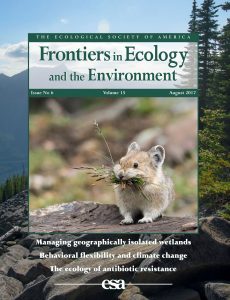 The Ecological Society of America, founded in 1915, is the world’s largest community of professional ecologists and a trusted source of ecological knowledge, committed to advancing the understanding of life on Earth. The 10,000 member Society publishes five journals and a membership bulletin and broadly shares ecological information through policy, media outreach, and education initiatives. The Society’s Annual Meeting attracts 4,000 attendees and features the most recent advances in ecological science. Visit the ESA website at https://www.esa.org.