Climate changes directly and indirectly affect the growth and productivity of forests: directly due to changes in atmospheric carbon dioxide and climate and indirectly through complex interactions in forest ecosystems. Climate also affects the frequency and severity of many forest disturbances.

Impacts on Forest Growth and Productivity:

Many aspects of projected climate change will likely affect forest growth and productivity. Three examples are described below: increases in carbon dioxide (CO2), increases in temperature, and changes in precipitation. 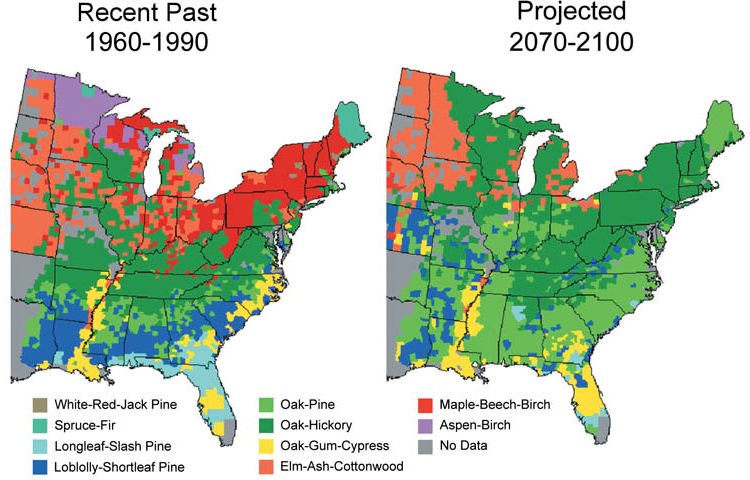 Projected shifts in forest types. [3] The maps show current and projected forest types. Major changes are projected for many regions. For example, in the Northeast, under a mid-range warming scenario, the currently dominant maple-beech-birch forest type (red shading) is projected to be completely displaced by other forest types in a warmer future. Source: USGCRP (2009)

Climate change could alter the frequency and intensity of forest disturbances such as insect outbreaks, invasive species, wildfires, and storms. These disturbances can reduce forest productivity and change the distribution of tree species. In some cases, forests can recover from a disturbance. In other cases, existing species may shift their range or die out. In these cases, the new species of vegetation that colonize the area create a new type of forest.

Disturbances can interact with one another, or with changes in temperature and precipitation, to increase risks to forests. For example, drought can weaken trees and make a forest more susceptible to wildfire or insect outbreaks. Similarly, wildfire can make a forest more vulnerable to pests. [2] [3] The combination of drought and outbreaks of beetles has damaged piñon pine forests in the Southwest.

llegal logging negatively impacts the economic and ecological systems of optimal forest management. According to the text of the 1998 G-8 meeting held in Birmingham on forest management, “illegal logging robs national and subnational governments, forest owners and local communities of significant revenues and benefits, damages forest ecosystems, distorts timber markets and forest resource assessments and acts as a disincentive to sustainable forest management. International trade in illegally harvested timber including transfer pricing, under invoicing and other illegal practices, exacerbates the problem of illegal logging.” The magnitude of illegal logging is significant. Research indicates that in the recent past over 70 per cent of timber processed in Indonesia came from illegal sources.

Forest ecosystems are dynamic and complex. A disturbance to any part of the network can alter the balance of relationships and affect the entire ecosystem either positively or negatively. Fire is unique in that it can be either a beneficial natural process or a devastating catastrophe. For species like lodgepole pine, fire is necessary to help reduce competition and help the species release its seeds. However, climate change, drought and other conditions have caused occurrences of intense wildfire to increase, which can damage forests so badly that it takes years for them to naturally recover. Wildfire is necessary for forests, but also a threat to them, so strong policies and management are imperative to make sure wildfire is working for our forests instead of against them.

Total Wildland fires and Acres in the United States 1988–2014

Insect pests, diseases and other biotic agents have considerable impacts on forests and the forest sector. They can adversely affect tree growth and the yield of wood and non-wood products. Damage caused by forest pests can significantly reduce wildlife habitat thereby reducing local biodiversity and species richness. They can alter natural forest landscapes by decimating one or more tree species as has been observed in eastern American forests as a result of chestnut blight and throughout the Northern Hemisphere because of Dutch elm disease. Some pests have necessitated changes in management regimes often forcing forest managers to switch to alternative tree species in plantations; for example, the failed attempts in many parts of the world to establish mahogany plantations because of the presence of mahogany shoot borers (Hypsipyla spp.). Pathogens may also limit the sites on which species can be grown successfully outside their natural range as has been experienced with red band needle blight (Mycosphaerella pini) and western gall rust (Endocronartium harknessii) infecting Pinus radiata.

Forest insect pests, diseases and other pests are having significant impacts on forests worldwide. While the devastating impacts of indigenous forest pests are already recognized, those of introduced species are increasingly being recognized as well. Rapid transport, ease of travel, and free trade have facilitated the spread of pests, as evidenced by the list of transboundary species.

There is a growing trend towards adopting more sustainable forest management strategies to contain forest pests, particularly in developed countries (FAO, 2007a). This movement is related to changes in the perception and role of forests, which are increasingly valued not just for economic reasons but also for their ecological and social functions. Insect pests are the main problem reported. Disease-causing pathogens are more difficult to detect and identify and are reported less frequently. Training and expertise in pest identification and in detection of the first signs and symptoms are needed in many countries as a first line of defence against pest introductions. Monitoring and surveillance of forest pests are needed, as well as agreement on parameters by which to gather data, in particular common definitions on what constitutes a disturbance and how the data are to be collected (FAO, 2007a).

Most countries do not have reliable information on the area of forest affected by insect pests and diseases because they do not systematically monitor these variables (FAO, 2007a)

An integral part of sustainable forest management is measures to protect forests from natural threats such as fire, insects and diseases. Increasingly, an additional and more severe threat has been affecting the forest sector worldwide – invasive species. Invasive species are any species that are non-native to a particular ecosystem and whose introduction and spread causes, or are likely to cause, socio-cultural, economic or environmental harm or harm to human health.

The increasing global movement of people and products is also facilitating the movement of alien species around the world. These species may be unintentionally introduced to new environments in shipments of food, household goods, wood and wood products, new and used tires, animal and plant products, containers, pallets, internal packaging materials and humans. In the absence of their natural predators, competitors and pathogens, they can prosper in new environments and spread at the expense of native species, affecting entire ecosystems.

(some overlapping with illegal logging, but wanted to emphasize on the land conflict here)
Deforestation is the permanent destruction of forests in order to make the land available for other uses. An estimated 18 million acres (7.3 million hectares) of forest, which is roughly the size of the country of Panama, are lost each year, according to the United Nations’ Food and Agriculture Organization (FAO). Deforestation occurs around the world, though tropical rainforests are particularly targeted.

There are many causes of deforestation. The WWF reports that half of the trees illegally removed from forests are used as fuel. Some other common reasons are: