Resource of the Week: #SciComm & #PrideMonth 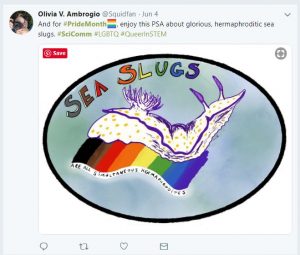 It is Pride Month! Here are a few resources on representation, inclusion, and intersectionality with science.

Stay tuned for more in our Resource of the Week series*, as the month progresses. As always, we’d love to hear your recommendations on additional resources to share in the series.

“LGBTQ+ people in science, technology, engineering, and maths (STEM) continue to struggle to openly be themselves (see: 2013 Queer in STEM survey, 2014 Factors Impacting The Academic Climate, 2015 American Physical Society survey, 2018 Coming out in STEM: Factors affecting retention of sexual minority STEM students). We believe that a day of recognition goes a long way in helping raise awareness and increase support.  It is an important component of the global push to increase diversity and inclusion in STEM.” See the event website and #LGBTSTEMDay on Twitter.

“Here’s something to think about: Trans people on twitter are constantly suspended because members of certain hate groups search for their groups’ names and mass-report every mention of them, and popular theory says the sheer volume of reporting has trained twitter’s moderation…Assuming this is an algorithm training issue, if everyone were to spend the rest of #Pride spending just 15 minutes a day searching for certain terms and reporting hate speech, twitter’s algorithms should start recognizing them.” (Thread link)

*Note: We will also individually post these resources into the Resource of the Week series over time.