SciComm Lit Review: Josh Silberg reviews “If I Understood You, Would I Have This Look on My Face?: My Adventures in the Art and Science of Relating and Communicating”

“In many ways, Alan Alda represents an archetype of one type of audience member that people try to reach with their science communications. He is a non-expert. He’s interested in a range of scientific topics from health to psychology to ecology. He is exceptionally curious. If this sounds like one of your regular target audiences, then this book is for you.” ~J. Silberg 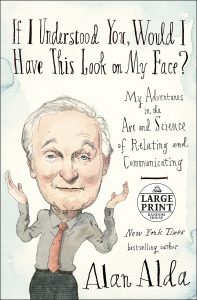 I’ve researched everything from humpback whales to whale sharks to rockfish—I just couldn’t decide on one creature to study. So I set out to find a career where no two days are alike. [Editor’s note: read Josh’s #MySciComm post for loads of details about how he found that career, in #scicomm.] Now, I’m the Science Communications Coordinator for the Hakai Institute—a British Columbia-based research institution where intrepid scientists from a variety of fields study the coast from the icefields down to the oceans. I help scientists at the Institute communicate coastal science stories through blogs, videos, infographics, and the occasional poem.

I’m fascinated by strategies that can be used to teach communication skills to scientists of all career stages. I’ve found that many scientists are keen to improve their ability to connect with diverse audiences both inside and outside their field of study, but they often don’t know where to start.

Alan Alda’s book is especially useful for scientists, educators, science communicators, and students who are ruminating about how to better relate their science to a specific audience. It’s easy to try to reinvent the wheel, especially if we don’t regularly interact with people from other professional backgrounds. We can forget that other disciplines—in this case, acting and improv—offer valuable insight into our own fields.

In many ways, Alan Alda represents an archetype of one type of audience member that people try to reach with their science communications. He is a non-expert. He’s interested in a range of scientific topics from health to psychology to ecology. He is exceptionally curious. If this sounds like one of your regular target audiences, then this book is for you. 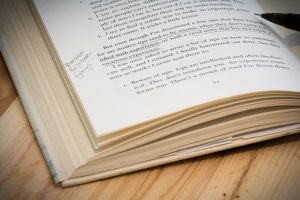 Some of Josh’s marginal notes

Marginal Notes (the good & the bad): favorite takeaways and productive points of disagreement.

The book contains a strong collection of anecdotes from Alda’s career in acting, as a host of PBS’ interview show Scientific American Frontiers, and now as founder of the Alan Alda Center for Communicating Science at Stony Brook University. The book is more about a paradigm for communicating science rather than a step-by-step guide.

For instance, Alda doesn’t get into the nitty gritty of strategies for telling more engaging stories. However, through rich anecdotes, he probes his decades of experience to discuss what has worked, where he went wrong, and what he learned from his missteps.

The tone of the book is by design. Alda’s approach to science communication is that “…the solution, in my view, isn’t a formula, a list of tips, or a chart that shows where to put your feet. Instead, it’s transforming yourself—like going to the gym—only a whole lot more fun.”

During an improv show, actors listen and react to their counterparts. There are no wrong answers. You can redirect, but the general dialogue must flow from one idea to the next. Recognizing what others are thinking about is a critical skill for science communicators too. Don’t make assumptions about what others know, or assume that what you know is the only way of knowing.

Science communication is a skill that can be learned

Most people know a scientist who seems to have an innate ability to communicate their research, tell engaging stories, and conceive poetic analogies to relate their science. But how much of that scientist’s skillset truly is innate? It can be easy to overlook how that communicator obtained those abilities. Communication is a skill you can improve. It’s a matter of training, practice, and a few key paradigm shifts to discover how people obtain and retain information. But it’s also important to remember that science communications is “…an art, not a formula.”

Alda, A. (2017). If I Understood You, Would I Have This Look on My Face?: My Adventures in the Art and Science of Relating and Communicating. New York: Random House.

Alan Alda has been on a decades-long journey to discover new ways to help people communicate and relate to one another more effectively. If I Understood You, Would I Have This Look on My Face? is the warm, witty, and informative chronicle of how Alda found inspiration in everything from cutting-edge science to classic acting methods. His search began when he was host of PBS’s Scientific American Frontiers, where he interviewed thousands of scientists and developed a knack for helping them communicate complex ideas in ways a wide audience could understand—and Alda wondered if those techniques held a clue to better communication for the rest of us.

In his wry and wise voice, Alda reflects on moments of miscommunication in his own life, when an absence of understanding resulted in problems both big and small. He guides us through his discoveries, showing how communication can be improved through learning to relate to the other person: listening with our eyes, looking for clues in another’s face, using the power of a compelling story, avoiding jargon, and reading another person so well that you become “in sync” with them, and know what they are thinking and feeling—especially when you’re talking about the hard stuff.

Drawing on improvisation training, theater, and storytelling techniques from a life of acting, and with insights from recent scientific studies, Alda describes ways we can build empathy, nurture our innate mind-reading abilities, and improve the way we relate and talk with others. Exploring empathy-boosting games and exercises, If I Understood You is a funny, thought-provoking guide that can be used by all of us, in every aspect of our lives—with our friends, lovers, and families, with our doctors, in business settings, and beyond.