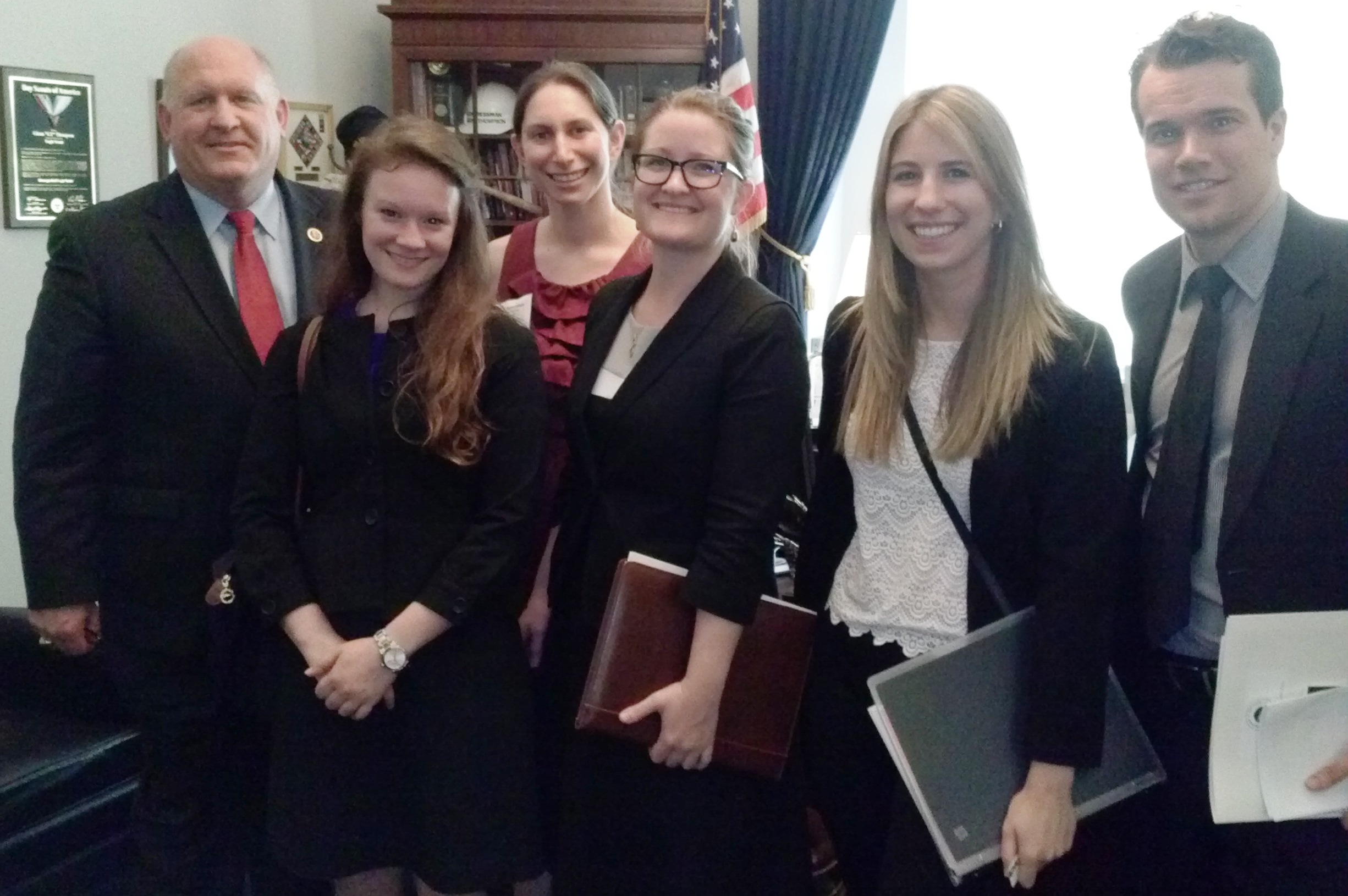 “The Congressman believes strongly in the value of fundamental research the National Science Foundation makes possible and will continue to support it.”

“…the Senator is concerned that NSF funds some “silly research” such as a study on duck penises….”

These are just a few examples of what various congressional staffers said to scientists participating in last week’s Biological Ecological Sciences Coalition Congressional Visits Day, co-organized by the Ecological Society of America and the American Institute of Biological Sciences.  For many scientists, it was their first time to step into the marble-floored congressional buildings on Capitol Hill.  Their goal: to meet with their congressional delegations, highlight the value of federally supported science, and, hopefully, begin to cultivate professional relationships with policymakers.

Over 30 graduate students, field researchers and professors visited 55 congressional offices to highlight the contributions of federally supported biological research programs to their respective states and the nation.  It was an energetic group that found compelling ways to make their message resonate with policymakers.

As evidenced by the quotes above, while congressional offices varied in how they viewed sustained funding for federal science programs, the scientists participating in the meetings used their local ties as well as areas of common interest to connect with policymakers.

One of ESA’s Graduate Student Policy Award (GSPA) recipients, Matthew Berg, for example, an eco-hydrology graduate student at Texas A&M University, has a folksy Texas charm.  Focusing on his state’s water limitations, he talked about the role federal agencies play there in enabling monitoring and research into water-related issues. But before he even got to those points, Matt had successfully established himself as a fellow Texan: he was wearing his “Aggie” ring—the massive Texas A&M ring widely known to all alums of that institution and instantly recognized from across the room.  Upon entering his Congressman’s office, Matthew’s ring was immediately spotted by a young, broad-shouldered man who was sporting the same ring and the two swapped stories about their alma mater while we waited.  And then the staffer with whom Matt was actually meeting appeared and he, too, was wearing the same ring.  This common denominator fostered an easy rapport between the grad student and the congressional staffer and a productive dialogue ensued.

Scott Collins and Don Natvig, professors at the University of New Mexico, had the advantage of being able to offer congressional staff a tour of an especially alluring research area: the Sevilleta Long-term Ecological Research site. Collins is director of the Sevilleta LTER while Natvig is director of the Sevilleta Field Station.  The two invited staffers and their bosses to come out for a personal tour during a congressional recess period to discuss in more detail the research, education and outreach efforts at the facilities and research sites at the Sevilleta.

During one meeting, some of the graduate students got some push back regarding research on hydraulic fracturing. Existing evidence suggests the practice is safe, said one policymaker, so why continue to put money into research? University of Maryland graduate student and ESA GSPA winner Carlos Silva countered that further research could conceivably help to reaffirm or improve the environmental safety of the practice.

Pennsylvania State University student Allison Lewis and others noted the role federal support, particularly from the National Science Foundation, has played in funding their research projects and how continued implementation of the budget sequester endangers their ability to pursue careers in science. Caitlin McDonough MacKenzie, an ESA GSPA recipient, was able to give a first-hand example of the budget sequester: as a result of the across-the-board cuts to all federal agencies, Caitlin’s research with the National Park Service is on hold until further notice.

Congressional staff in many offices said they were eager to receive written personal stories about how the sequester is impacting scientific research. Lawmakers can use such personal stories in floor statements to highlight how sequestration is affecting the communities they represent. No matter where they stand on the political spectrum, all Members of Congress compartmentalize information based on how they believe it will impact their constituents.

At the end of the day, many participants gathered for an informal happy hour to share their experiences.  Happily, many told us they plan to continue to be ‘scientist citizens’ and look for ways to keep in regular contact with their elected officials, provide feedback on public policy and serve as a resource on environmental issues in their state.

Participants in BESC’s Congressional Visits Day stand before the Capitol.