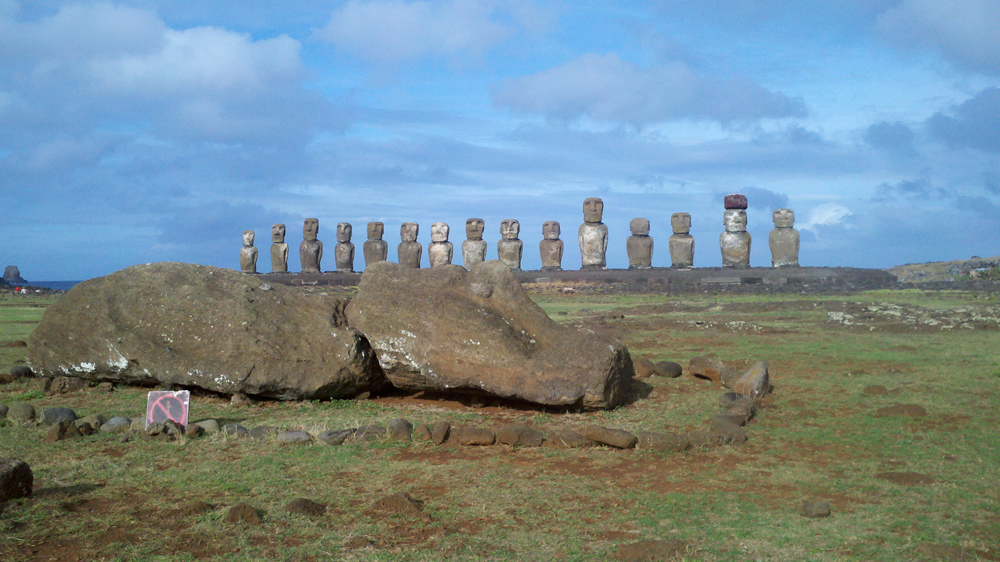 Ahu Tongariki, the largest platform on the island, features fifteen restored Moais. The Moai in the foreground was likely damaged in transit and never erected. Credit: Brian Wee.

This post contributed by Brian Wee, chief of external affairs for NEON, Inc.

The July 2012 edition of National Geographic features Easter Island – known also as Isla de Pascua in Spanish and Rapa Nui by the local population.  Rapa Nui is famous for the silent stone statues called Moais that are scattered around the island.  In late May of 2012, my partner and I spent four days exploring Rapa Nui.  A remote speck of land no larger than Washington, DC in the Pacific and accessible by a five-hour flight from Santiago, Chile, Rapa Nui is often referred to as one of the most isolated, inhabited areas.  One skillful (and probably lucky) Polynesian expedition discovered it sometime in the 8th century.  Given the Pacific’s expanse, you have to wonder about the probability of finding such a small island in the vast ocean, and accordingly, how many other expeditions did not quite make it.

Most of the Moais are located along the island’s coast, although some are also found inland.  Moais are stood on ceremonial stone platforms called Ahus, and visitors are reminded not to clamber on top of the Ahus at the risk of heavy fines.  A guidebook advocated gently shooing horses off these platforms if you come across an animal browsing on an Ahu.  Yes, horses.  They roam freely on the island.  Like the two that were wandering around the parking lot of the Rapa Nui airport after our flight landed on Monday evening.  Our Bed &Breakfast host had picked us up at the airport, but I resisted the temptation to tap his shoulder and ask “Say…. did you see those HORSES walking around in the airport PARKING LOT?”  Given that he deftly maneuvered the vehicle around the animals and didn’t say anything about them, I figured that he must have seen them.  Oh well. 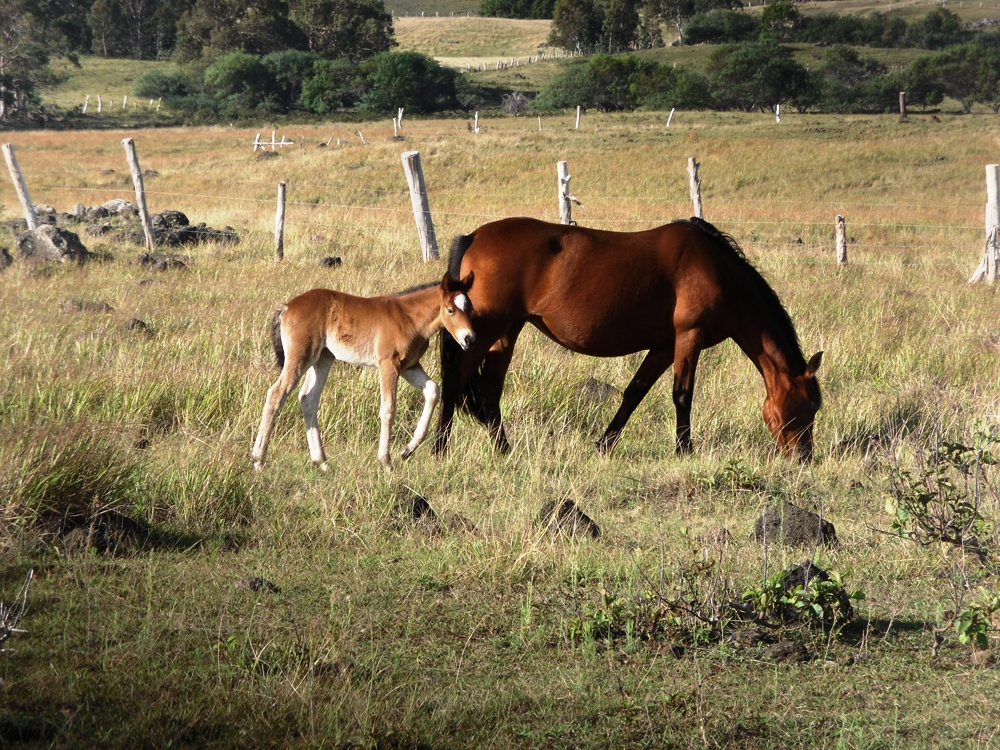 One of Rapa Nui’s many horses and her foal at the Ahu Tepeu site. Credit: Brian Wee

By some reports, the number of horses on the island is greater than that of the roughly 5000 full-time residents.  It wasn’t long before I thought of the effects of unchecked herbivory on the structure and function of the island’s plant community.  Trees are sparse on the island, and there is some evidence that Rapa Nui once supported more trees before the human population expanded to what is thought to be unsustainable levels.  The island’s last indigenous tree – the Sophora toromiro – died in the 1950s, but the species was saved from extinction by a Norwegian expedition which collected its seeds.  I spotted two of the reintroduced toromiro trees on the Chilean forest service’s nursery, which was just a minute’s walk away from our Bed & Breakfast.

The toromiro was not the only island inhabitant to undergo a severe population bottleneck: the indigenous human population had undergone a number of population crashes as a result of overpopulation and the subsequent overexploitation of resources.  The Moais that now stand guard over the ruins of villages were, for the most part, restored after warring tribes toppled them.  Not all of the statues have been restored: at a number of sites, Moais can be found lying toppled face down.  This is to allow future archeologists to ask new questions of these artifacts using better techniques and technologies.

The approaching winter in the Southern Hemisphere and the quiet tourist season allowed for one luxury:  moments of quiet contemplation about what it must have been like when these villages were foci of human activity.  What did the Moais see as they stood silently watching over the evolution of a tightly coupled human – natural system?  Looking at the toppled but once proud Moais that were now face-down in the soil, it was hard not to be reminded of the events of 9/11 as I watched events in New York City unfold live on TV in my office at the University of Texas at Austin.  Such are the visible and punctuated events that people have vivid memories of, but what of the invisible, multi-decadal, phenomena that escape most of our attention?  How do environmental scientists construct and tell this tale of large-scale environmental change and its relation to issues of sustainability?

Our publications, data and information products are in some sense the Moais of our age:  they bear testimony to future generations of how we deal with the challenges of living on this tiny outpost of life in the solar system.  As we gain proficiency in curating our data, information and knowledge products, it will become increasingly clear that those tasks are intricately linked to the long-term stewardship of natural resources.  Adaptive management of our biodiversity and ecosystem services in the age of the Anthropocene requires easily accessible information across a wide range of disciplines for ecological forecasting and decision-support.  Unlike the early inhabitants of Rapa Nui, we have the benefit of science, education, technology and history to help inform how we deal with this generation’s challenges.  The jury is still out on whether we can bring those capabilities to bear on large-scale environmental challenges, but let this be a call to giving some thought on managing the products of your research like data, model code, protocols, calibration procedures, and others.  But that is a topic for another post!