When it comes to bee tongues, length is proportional to the size of the bee, but heritage sets the proportion. Estimating this hard to measure trait helps scientists understand bee species’ resiliency to change.

Ecologists will report on this and other pollination research news at the Ecological Society of America’s 2014 Annual Meeting in Sacramento, Cal., August 10-15.

For bees and the flowers they pollinate, a compatible tongue length is essential to a successful relationship. Some bees and plants are very closely matched, with bee tongue sized to the flower depth. Other bee species are generalists, flitting among flower species to drink nectar and collect pollen from a diverse variety of plants. Data on tongue lengths can help ecologists understand and predict the behavior, resilience and invasiveness of bee populations. 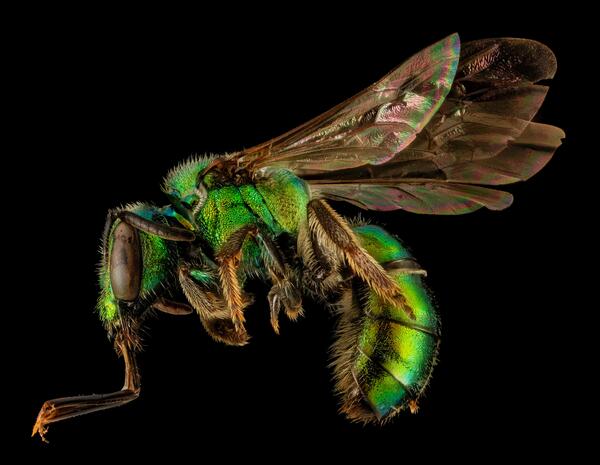 A lovely Augochlora pura extends part of its hinged tongue. A. pura is a member of the relatively short-tongued Halictidae family, uprettily known as the sweat bees. The small, solitary bee is one of the most common bees of forests and forest edges in the eastern United States, and a promiscuous attendant to many flower species. Collected by Phillip Moore in Polk County, Tennessee. Photograph by Phillip Moore. Photo courtesy of the USGS Bee Inventory and Monitoring Lab.

But bee tongues are hard to measure. The scarcity of reliable lingual datasets has held back research, so Ignasi Bartomeus of the Estación Biológica de Doñana (EBD-CSIC) in Sevilla, Spain, and his colleagues at Rutgers University (New Brunswick, N.J.) looked for a more easily measured proxy, like body size. Bee tongues are proportional to body size, but modulated by family adaptations—bee families typically have characteristic tongue shapes and proportions. The research group came up with an equation to predict tongue length from a combination of body size and taxonomic relationships.

Bartomeus will explain the equation and the usefulness of tongue length data for ecology at the 99th Annual Meeting of the Ecological Society of America in Sacramento, Cal., this August during the “Pollination I” oral session on Thursday afternoon, August 14. The meeting lasts five days and draws roughly 3,500 environmental scientists from around the world.

A bee collects pollen on its body as it laps sugar-rich nectar from within the cupped interior of the flower’s petals, and carries the flower’s genetic heritage away with it to fertilize the next flower of the same species that it visits. In most species, the bee’s tongue is guarded by a long, two-sided, beak of a sheath, which folds under the body when the bee flies.

Perched at the mouth of a flower, the bee unfolds the beaky maxilla and extends its tongue into the corolla of the flower, dipping and retracting it to lap up the nectar. If its tongue is too short to reach the nectar, the bee has a problem. Long flowers like honeysuckle or columbine are too deep for short-tongued bees.

But longer isn’t always better; long tongues are harder to wrangle into short flowers. Long-tongued bees are often specialists, favoring a few deep-throated flower species. In the bumblebee-sparse southern tip of Argentina, for example, Bombus dahlbomii, the native long-tongued giant of Patagonia, has lost ground to a new bumblebee from Europe, the short-tongued generalist Bombus terrestris, imported to help pollinate tomatoes. Although disease has likely played a role in the retreat of the long-tongued giant, B. terrestris also appears to be out-competing an earlier European immigrant, the long-tongued Bombus ruderatus.

Because specialists depend on just a few flowers, they can be more vulnerable to change. Tongue length can thus be intertwined with a species’ risk of extinction, as well as specialization.