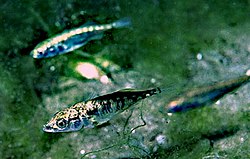 Threespine stickleback are famous as an example of rapid, adaptive radiation. These small freshwater fish have evolved in the lakes of British Columbia to have very different lifestyles.  In large lakes, there are two varieties:  The benthic variety hangs out at the bottom of its lake and feeds on invertebrates that live in the sand, while the limnetic variety stays in the water column and eats floating plankton.  Strong competition for food is thought to have produced these two species from a common ancestor in as little as 10,000 years, which is practically light speed in evolutionary time.

A third generalist variety lives in smaller lakes where the competition for food is not as vicious. Adept at both feeding strategies, these fish are thought to have undergone little adaptive evolution, and therefore are similar to the other forms’ common ancestor.

Luke Harmon of the University of Idaho and his colleagues created miniature replicas of the lakes in their laboratory and observed the effects introduced fish had on their surroundings.  In experiments including the two specialized species, the researchers detected more dissolved organic carbon in the water.  They found that two parts didn’t make a whole: Even though the specialists were covering the same foraging area as the generalist species, something unbeknownst to the researchers was different about their foraging habits.

This dissolved carbon inhibited light penetration through the water, disrupting the growth of aquatic plants and other carbon-producing organisms. Harmon concluded that the evolution of two varieties would likely have very different effects on the environment, and that the specialists could be seen as ecosystem engineers.

The authors write that these results could have far-reaching effects on other species; they write that “adaptive radiation may modify the environmental conditions of ecosystems and shape the selective pressures of other species.”