The world lost a dedicated scientist and enthusiastic spokesperson for the environment with the passing of Tom Lovejoy. His optimism, generosity, and compassion inspired an amazing spectrum of ecologists, conservation biologists, economists, politicians, celebrities, and students. Throughout his entire career Tom demonstrated that one person can make an important contribution by combining preparation and persistence in defining clear goals. His early experience in the Amazon began a life-long love of tropical biology and conservation. He shared his excitement with everyone, from his family and friends to new acquaintances he met along his journey. Tom’s love of nature as well as his great concern at its fragility was the basis for his exceptional ability to communicate the importance of protecting nature and its value for humanity. The Ecological Society of America benefited greatly from Tom’s leadership and ability to formulate science-based projections regarding the consequences of climate change and deforestation.

I was among the fortunate people to know Tom as a friend and mentor when we were graduate students in biology at Yale, 1964-1970. He had just completed his undergraduate degree at Yale and knew the faculty, so he could share wonderful, often humorous stories. We benefitted immensely from interactions with Professor G. Evelyn Hutchinson. Hutchinson was then the Director of Graduate Studies in the Biology Department and an internationally recognized eminent ecologist. He taught a series of graduate courses in limnology and biogeochemistry while working on projects, including impacts of the early Mayan civilization on tropical lake histories, the Treatise on Limnology, and other books on population and ecosystem research. Hutchinson encouraged students to follow whatever they enjoyed most and to develop their own ideas. Tom took this advice and made his first trip to the Amazon in 1965 to work with the Evandro Chagas Institute in the rain forest outside Belém. This field work began an extremely ambitious analysis of the mega-diversity of the forest-dwelling birds that later built on his dissertation for a long-term study of forest fragments in the Amazon. The Minimum Critical Size of Ecosystems Project (Biological Dynamics of Forest Fragments Project) tested some emerging concepts in island biogeography that were being applied to design forest reserves.  The effects of large and small remnants on the sustainability of biological diversity were unknown. Decades of research established the need for large and small areas connected by riparian forest corridors to allow for migration among species and the avoidance of drying along “edge effects.”

Tom used his passion for conservation and understanding the consequence of losing the tropical rainforest to inform policy makers and other thought leaders  worldwide on the critical role society needs to play in conserving the earth we rely upon. He took groups to his remote Camp 41 in the Amazon so that people could experience for themselves the wonder of the tropical forests and their fragility. Through these experiences, many individuals came to understand the linkage between nature and the actions human conduct affects us all.

Tom had a strong network of mentors, especially S. Dillion Ripley III and Ruth Patrick. Ripley was Director of the Peabody Museum at Yale He was an imaginative ornithologist who had a close relationship with Hutchinson and later headed the Smithsonian Institution from 1964-1984. Patrick was also a valued Hutchinson colleague at the Philadelphia Academy of Natural Sciences. She developed innovative concepts of diatom species richness and relative abundance as indicators of river water quality. Patrick was one of the first North American ecologists to study tributaries of the Amazon in 1955.

Tom maintained long-term interactions with Hutchinson, Riley, and Patrick after completing his Ph.D. in 1971. His first position was with the Philadelphia Academy in 1972 to 1973. Then, after working with the World Wildlife Fund from 1973 to 1987, he moved to the Smithsonian Institution from 1997 to 2001 before beginning his tenure at George Mason University.  For decades, Tom mentored diverse students at George Mason and Yale as well as through the Smithsonian-George Mason School of Conservation, His dedication to mentoring students in Brazil and others in the tropics continued throughout his career. Besides his selection as a Fellow of the Ecological Society of America, Tom’s numerous honors included the Tyler Prize for Environmental Achievement in 2001 and the Blue Planet Prize in 2012. Two of his mentors, G.E.  Hutchinson and R. Patrick, were among the first to be honored with the Tyler Award in 1974 and 1975.  Tom was also a fellow of the Linnean Society of London, the American Association for the Advancement of Science, the American Ornithologists’ Union, the American Philosophical Society, and the American Academy of Arts and Sciences. He was especially proud of his Prime Time Emmy Awards for the NATURE series on the Public Broadcasting System in 1987-1988.  Tom’s ability to connect with general audiences and to provide timely information helped to generate support for natural history and environmental research.

Tom shared his insights widely with governmental and non-governmental organizations while serving on advisory boards. His leadership, publications, and editing scientific journals contributed immensely to many large organizations. He served as president of the American Institute of Biological Sciences, and the Association for Tropical Biology and Conservation. In all these contributions, Tom found ways to resolve complex environmental issues related to climate change and habitat protection based on scientific research and data-based projections. Tom will be greatly missed and widely appreciated by a world-wide community of environmental scientists, students, and policy makers.  This recent loss of Tom and his colleague Edward O. Wilson creates is a difficult but inspiring challenge for the next generation of ecologists and conservation biologists to continue their legacies and to protect biodiversity. 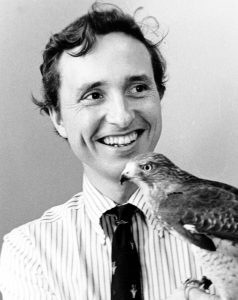