Art and science demarcate opposite ends of human experience. Right? Wrong, I think. I’m a scientist and not an artist, so I should be careful in my representation of art. (By art or the arts, I mean much more than just visual art; I also mean sound, performance, and so on.) But here’s what someone who knows more than me has to say about art:

“Various theories have been advanced over the years – pleasure, beauty, expression, or the stimulation of emotion – but, as the philosopher Gordon Graham writes, “none of them can on its own explain the special value of great art.” (Philosophy of the Arts, 52.) So what does Graham propose? That art is valuable as a source of knowledge and understanding.” (From ‘Art Seeking Understanding’, https://templetonreligiontrust.org/areas-of-focus/art-seeking-understanding/?gclid=Cj0KCQjw8p2MBhCiARIsADDUFVGswZYQ44ngAA2ljUhU1TAY8HR3DDIYoMmFD8yzgzFFwuVolFGFgIwaAmqtEALw_wcB)

Is Art the Opposite of Science?

Of course, I wouldn’t argue that art and science are the same, but that there are parallels. Both attempt to make sense of the world. Could we even say that both begin with a hypothesis about the world? And maybe even that both test those “hypotheses,” just in very different ways? 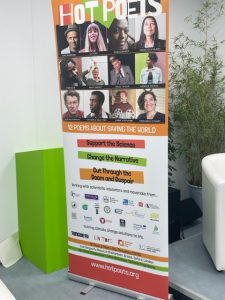 Given that background, I was very fortunate to happen upon two arts events in the COP26 pavilion area. First, the pavilion created by MET Science (the UK weather and climate forecasting office) sponsored an event with some remarkable poets, who read their poems devoted to climate change. All four poems read referenced both the science and the deep personal effect on their psyches. I was moved, and, for me, it continued a process of personalization of environmental change — what does climate change mean to individuals. Check out the “Hot Poets” (get it?) below.

And here is a clip from of these remarkable poets.

As I prepared to leave the pavilion area in general, I heard a remarkable sound coming from the neighboring pavilion, which focuses on the cryosphere, that is, the ice on the Earth. I’ll summarize what we now know about the physical science of climate change, including ice. Ice is turning out to be a key component of the Earth system in terms of future climate scenarios, and one with far less certainty (and with scary low-likelihood scenarios) than most other components. The event at the Cryosphere pavilion that I heard was a mix of story telling and throat singing. by Inuit representatives at COP26: voting members of their party but obviously also contributors to the socio-political-cultural milieu at the conference. I have to first that the four performers were natural born comedians. They had me starry eyed but also laughing hysterically at times. Back to throat singing. How to explain it. It seems to involve harmonics between singing in the usual vocal range coming directly out of the mouth with deeper sounds emanating from the throat — from the same person and with singing conversation between the two singers. Here’s a short clip. Previous to these two women was an equally remarkable offering from a man and a drummer (the drum being very large in diameter, very shallow, and with a deep thromb).

A few caveats. So sorry for my inadequate vocabulary about the music that brought tears to my and others eyes. And for not knowing the names. By the way, the songs are, not surprisingly, about sustaining life in Inuit communities and much more. Finally, I also recognize that calling the throat singing I observed “art” may be labeling in a way that is inappropriate for Inuit culture. I’m speaking completely from my own frame of experience. Throat singing seems to play a key role in storytelling and family cohesion and love. (Maybe it’s similar to the role of the remarkable music created and freely played by my grown-up children.)

I’m not the best voice to express the role of art at COP26, so I’ll state it personally. For me, art expresses something about environmental change, trauma, and hope that science cannot reach.

Coming up soon: a physical science summary and, of course, my observations of the awesome march on Saturday, Nov 6!