The Eminent Ecologist Award honors a senior ecologist for an outstanding body of ecological work or sustained ecological contributions of extraordinary merit.

Soil ecologist Diana Wall, the founding director of the Colorado State University’s School of Global Environmental Sustainability, is world-renowned for uncovering the importance of below-ground processes. Best known for her outstanding quarter century of research in the McMurdo Dry Valleys in Antarctica, one of the more challenging environments of the planet, her research has revealed fundamental soil processes from deserts and forests to grasslands and agricultural ecosystems to New York City’s Central Park. Dr. Wall’s extensive collaborative work seeks to understand how the living component of soil contributes to ecosystem processes and human wellbeing—and to in turn uncover how humans impact soils, from local to global scales.

In landmark studies, she revealed the key role of nematodes and other tiny animals as drivers of decomposition rates and carbon cycling. The biodiversity in soils, she found, influences ecosystem functioning and resilience to human disturbance, including climate change. She demonstrated that the biodiversity belowground can at times be decoupled from biodiversity aboveground. Her focus on nematodes in soils in very harsh environments, from the cold, dry Antarctic to hot, dry deserts, opened up a perspective on how life copes with extreme environments. She has a laudable record of publishing excellent papers in top-ranked scientific journals.

Dr. Wall has played a vital role as an ecological leader, chairing numerous national and international committees and working groups and serving as president of the Ecological Society of America in 1999. She is a Fellow of ESA, the American Association for the Advancement of Science, and the Society of Nematologists. In 2013, she received the Tyler Prize for Environmental Achievement for her outspoken efforts as an ambassador for the environmental and economic importance of soils and ecology.

Currently, she is scientific chair of the Global Soil Biodiversity Initiative, which works to advance soil biodiversity for use in policy and management of terrestrial ecosystems. Dr. Wall is well-respected in her role as mentor of young scientists, over several generations, and as a communicator of science outside the usual academic arenas. 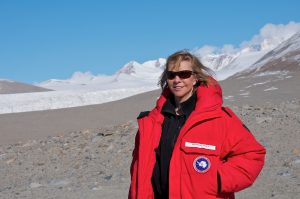