The Rim Fire one year later: a natural experiment in fire ecology and management

The enormous conflagration known as the Rim Fire was in full fury, raging swiftly from crown to crown among mature trees, when it entered the backcountry of Yosemite National Park in California’s Sierra Nevada in late August 2013. But inside the park, the battle began to turn, enacting a case study in the way management decisions and drought can combine to fuel large, severe fires.

“When the Rim Fire hit the park, it eventually encountered lands where fire had been used as a management tool, rather than immediately suppressed,” said Hugh Safford, a regional ecologist for the U.S. Forest Service based out of Vallejo, Cal. “When the Rim Fire hit these areas, the amount and continuity of forest fuel became a limiting factor,” he said. “There just wasn’t enough fuel in the system to keep it going.”

Safford will lead a group of visiting ecologists on a two-day excursion into the Rim Fire’s path this August during the Ecological Society of America’s 99th Annual Meeting to view the effects of the fire on adjacent landscapes that have been managed very differently over the last century.

Fire ecology is a hot topic at this year’s meeting, which will bring 3,500 environmental scientists to Sacramento on August 10-15 to discuss the most recent advances in ecological research, education, and policy.

Day one of the field trip will take visitors to sites in the Stanislaus National Forest, and day two to the National Park.

“The minute you leave the park, you’re on lands that get used by a lot of people for a lot of things,” Safford said. “The Forest Service is dealing with places that have had a lot of human impact and occupants.”

The Rim Fire: a natural experiment 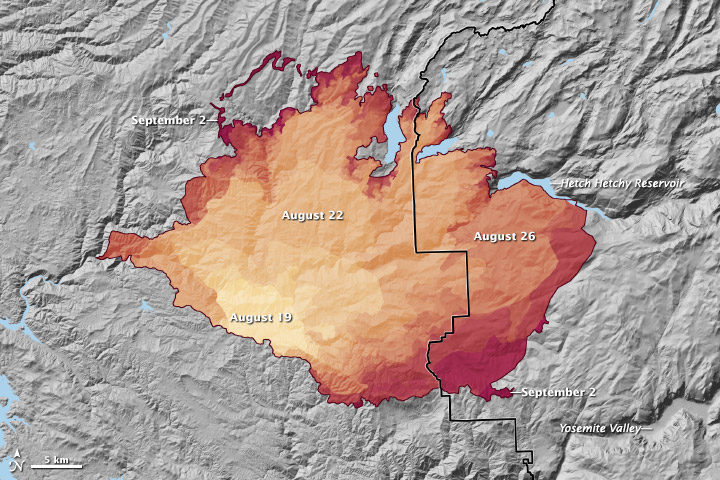 The progression of the Rim Fire from August 19 and September 2, 2013, as reported by fire managers. Credit, Robert Simmon/ NASA Earth Observatory.

The Rim Fire is in a sense a natural experiment. Yosemite, set aside in 1864, is mostly old growth forest, in which lightning-ignited fires have often been allowed to burn since the 1970s. The National Forest is a working landscape that includes private lands, major highways, dams, power lines, and communities, which the Forest Service protects by suppressing wildfire.

“I’m not suggesting one’s right and one’s wrong, but it presents an interesting contrast,” Safford said, “It’s a good case study to look at the effects of large, severe fires on watersheds subject to different management regimes.”

The fir, cedar, and pine forests of the high Sierra are adapted to frequent fires ignited by lightning. Fire scars on older trees, including the 2000-year-old giant sequoias record a history of low intensity fires recurring every 10 to 20 years. Fires that burned at low intensity through the understory tended to kill few of the mature trees, on the order of 5 to 10 percent. Recent studies have found that wildfires in the mixed conifer forests of the Sierra often run out of fuel and go out when they encounter sections of forest that have already burned within the last decade.

Though it smoldered on into October, by September 3rd, 2013, the Forest Service was reporting that the Rim Fire was 70 percent contained. Most of the acreage burned in the first week. The blaze that began as an alarming, out-of-control monster became just another big fire that managers were using to do ecological work.

Ignited by a hunter’s illegal campfire near the Rim of the World Vista in Stanislaus National Forest on August 17th, the fire ultimately burned for three months, consuming 257,314 acres of trees and $127 million taxpayer dollars. Smoke from the fire prompted air quality warnings from the Bay Area to Reno, Nev. It was the largest recorded fire in the Sierra Nevada.

A trend toward mega-fires 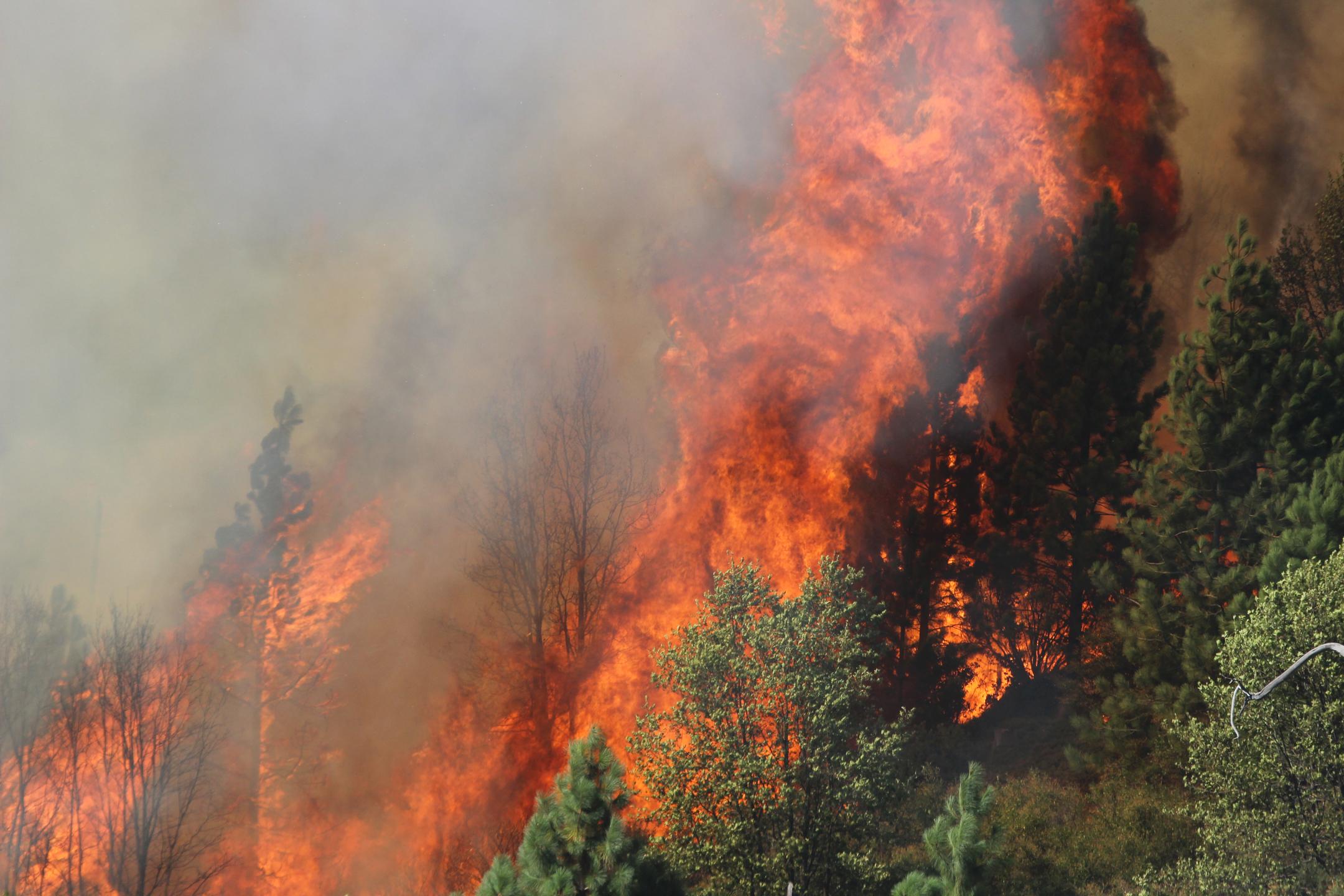 In the past few decades, ecologists have noted a trend toward intense “mega-fires” in the mountain forests of the western states. Recent record-breaking fires in Arizona and New Mexico join the 2013 Rim Fire, the 250,000-acre Carlton Complex fire currently burning in eastern Washington State, and the even larger Buzzard Complex fire in Oregon.

According to Safford, increased fuel on National Forest lands resulting from the long-term lack of fire is one of the principal drivers of recent increases in the size and severity of wildfires, trends which appear to be absent in the National Parks.

“The Rim Fire is not random occurrence. It’s part of a trend in big fires, and a real wake up call,” Scott Stephens agreed. Stephens, a professor at the University of California, Berkeley, authored a recent review on the characteristics and challenges of mega-fires with fellow fire specialists from Australia, Canada, Spain, and China, as well as the western U.S. in the March 2014 issue of Frontiers in Ecology and the Environment.

Large fires are a problem facing many of the world’s temperate and boreal forests. As was the case with the Rim Fire, mega-fires are often driven by a combination of drought, heat, wind, fuel from fire suppression, budget cuts, and encroaching development, Stephens said.

These big fires are more expensive to contain and to recover from than the more frequent but less destructive fires that used to characterize the Sierra’s mixed conifer forests, and they are dangerous for firefighters. They char enormous swaths of land, leaving large areas of up to 30,000 acres with no mature trees to seed a new generation.

“Most of the trees died in the Rim Fire. Not just the little guys. We’re looking at multiple patches of high severity fire that are of thousands of acres in size,” said Safford. “Where are the seeds going to come from? The landscape will be dominated by brush for a long time.”

Prelude to a habitat regime change

Very large, intense fires can take out entire habitat ranges, and, in combination with the pressures of land use change and development, leave nowhere for animals to retreat and await regrowth (while at the same time benefitting species that thrive in snag fields). Forest is slow to return, topsoil erodes, and quick-spreading opportunistic exotics capitalize on the disturbance.

In concert with warming climate, which is increasing water stress on forest species, there is potential for a permanent change in habitat type, from forest to brush or to grassland.

“After severe fire, mixed conifer forests in the Sierra Nevada are replaced by chaparral stands. When chaparral burns, it burns hot, and with the increasing frequencies of severe fire that are predicted, we expect to see progressively more forest converting to brush and not returning. With continued high fire frequencies, brush can convert to grassland as well,” said Safford. “We’re seeing that type of thing happening in southern California already, mostly in chaparral lands that are turning to fields of exotic grass.”

Questions of forest management are really questions about our priorities for the function and appearance of our landscapes—juggling priorities to protect property and respiratory health, esthetics, habitat, carbon sequestration, and water availability.

Given the difficulty of managing fire in proximity to homes and businesses, the Forest Service is considering mechanically thinning forests where it can, but these initiatives remain small in proportion to the huge fuel reduction backlog, and are currently expensive compared to controlled burning. Safford thinks it is an effort that all stakeholders should prioritize.

“We need to think about our grandkids,” said Stephens. “When I think about climate change, I look at the opportunities to do more to change the structure of the forest before big fires hit, and create the conditions so that when it does burn, we can have a party.” In 50 years, he said, opportunities are going to get squashed between the management history of the forests and an increasingly warm, dry climate. “If we begin the transformation now, we give future managers options.”