We asked science café aspirants for creativity and Simon Brandl brought it with his analogy of division of labor in a coral reef community, where butcher-sharks course among the brewers, bakers, and aristocrats of the reef.

Brandl shares the 2014 ESA Science Café Prize with co-winner Madhusudan Katti. He is a PhD candidate at the ARC Centre of Excellence for Coral Reef Studies and School of Marine and Tropical Biology, at James Cook University, in Australia, tweets as @SJBrandl_23 and blogs at simonjbrandl.

UC Davis Professor of Chemistry Jared Shaw went on Capital Public Radio in Sacramento this morning to talk about his Davis Science Café series. Special thanks to Prof. Shaw for making this outreach event possible.

Besides short periods of time during which the world closes in to drink beer, Munich is a quiet and picturesque community with numerous historic sites and businesses, featuring, for instance, old bakeries, butcher shops, and, of course, breweries. Most of the latter appear to occupy a distinct niche, having specialized on a restricted range of products.

Besides short periods of time during which the world closes in to find Nemo, the Great Barrier Reef is a quiet and picturesque city, consisting mostly of historic sites and inhabitants, featuring, for instance corals, algae, and, of course, fish. Most of the latter appear to occupy a distinct niche, having specialized on a restricted range of resources.

Not solely intended as an exercise in sneaking ecological jargon into a non-ecological context, the previous paragraphs show that man-made environments can exhibit striking similarities to natural systems. Here, I will risk a geographically humungous split between Munich and the Great Barrier Reef to highlight recent advances in our understanding of coral reefs – in other words, I will introduce butchers, bakers and brewers in one of the world’s most spectacular and diverse ecosystems and, in their company, illustrate why modern coral reefs look the way they do and why brewers are particularly important. The intentional replacement of the traditionally cited candlestick maker may hereby be due to Bavarian heritage or the proposed venue. 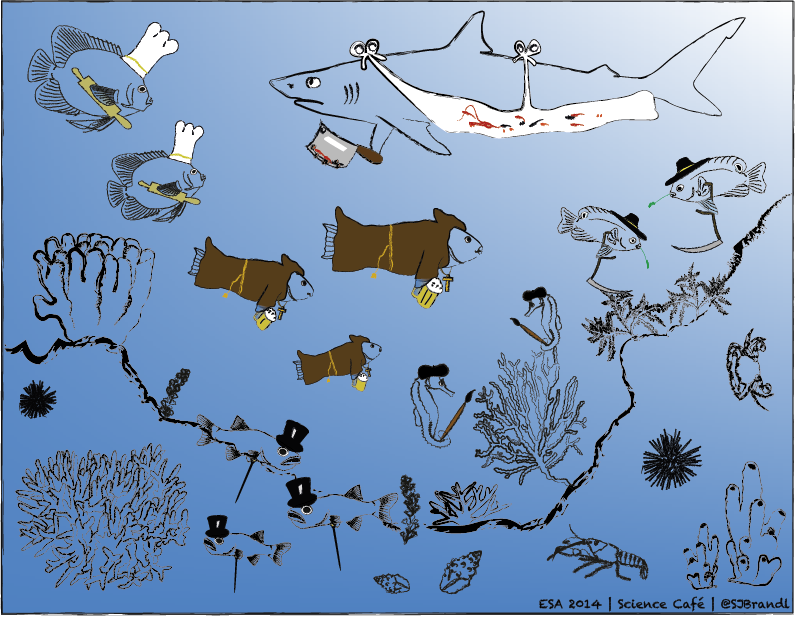 Butcher, baker, and brewer. This image illustrates the strikingly simple but powerful analogy between man-made and natural systems. By looking at the functional structure of coral reef fish communities through a human eye, we find butchers, bakers, and brewers, but also diligent, cranky farmerfish, visually pleasing but ecologically negligible aesthetes, or worthless aristocrats. Using this approach, we can begin to answer some of the most pressing questions in coral reef biology. What are the origins and future trajectories of coral reefs and their fishy inhabitants? How do humans affect this perfectly balanced market? And do more brewers really make a happier system? Credit, Simon J. Brandl.