Our planet is already changing. Current climate trends are bringing great disruption to ecosystems and the many species that share this planet—including people, because this is our environment, our home, our life support system. The economic costs of wildfire, drought, storms, fishery losses to ocean acidity, and the inundation of our coastal cities by sea level rise are clear.

Intact ecosystems buffer communities from the urban heat waves, floods, erosion, and storm surge intensified by a warming climate. Reefs, swamps, and coastal marshes, for example, help absorb the energy of big storms. Coastal development has denuded many of these protections, as was dramatically demonstrated in Superstorm Sandy’s collision with New York City and the New Jersey coast in 2012.

“We know that ecosystems provide these benefits, but their capacities to protect us are being overwhelmed,” said Nancy Grimm, professor and Senior Sustainability Scientist at Arizona State University. “These ecosystems are threatened, not just from climate change, but from other changes that we have brought to them. We need to reverse that trend, understand these systems better, and think about how we can bolster their services to society.”

Grimm, a past president of the Ecological Society, contributed to a technical input to the third NCA and guest edited a condensed and illustrated version for a special open access issue of the society’s journal Frontiers in Ecology and the Environment in November, 2013. 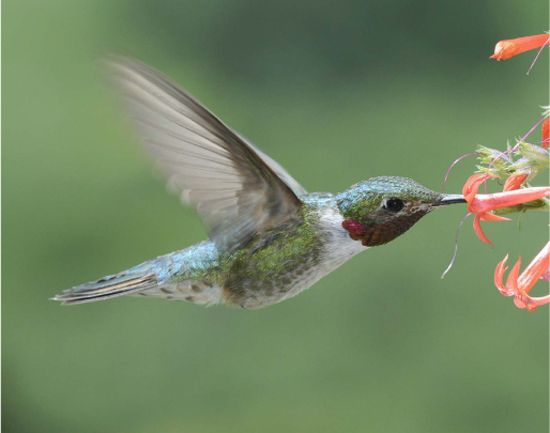 A male broad-tailed hummingbird sips nectar. The phenology of the early-season nectar plants the birds favor is changing more rapidly than the birds, leading to the potential for a mismatch that could affect both birds and their nectar resources. Credit, David Inouye.

The effects of climate change are felt earliest and strongest at higher altitudes and latitudes. Alaska’s coastal people are already witnessing changes in traditional fisheries and game resources as ice and permafrost retreat.  This more rapid change can cause migratory species that travel from equatorial or lowland winter grounds to lose sync with their arctic and alpine summer food sources.

When broad-tailed hummingbirds (Selasphorus platycercus) leave Central America in spring, they follow the flowering of plants that form an essential part of their diet north to breeding grounds in the western US. But in the Rockies, the flowers are blooming weeks earlier than they did a few decades ago. If this trend continues, and the hummingbirds can’t adjust, they may miss the critical nectar.

“This is only one example of how seasonal timing between plants and pollinators is changing in response to climate change in ways that will produce new ecological interactions,” said University of Maryland ecologist David Inouye, incoming president of the Ecological Society. “Many ecological communities will be changing in the near future, if they aren’t already.”

The USA National Phenology Network has tracked many changes in the timing of blooms, insect emergence, animal migrations, and other seasonal life events.

Emerging disconnects in seasonal timing are matched by disconnects in space. Species that can more easily get up and move to new locations as conditions change will leave behind the less mobile species of their communities, uncoupling predators from prey, pollinators from pollinated, and fruiting plants from animal distributors, leading to the eventual dissolution of the many complex interactions and contingencies that form an ecosystems.

These changes may seem small, but they are the first steps in a likely unraveling of many ecosystems that we depend on for the pollination of our crops, the support of our fisheries, the cleanliness of our water—and the integrity of beloved wild areas enjoyed by fishers, hunters, hikers, and boaters.

Often, the pressures of climate change and human development combine to much more devastating effect than either influence alone. In the last quarter century, native bark beetles killed millions of hectares of trees, from Alaska to southern California and the Rockies. Though such infestations are natural, the combination of drought and a climate change-associated trend to warmer winters have produced a severity of outbreak unprecedented in the historical record.

Fire suppression has led to a high density of trees in many forests of California and the southwest. In combination with hot, dry summers, forest conditions have fueled increasingly large and frequent fires, like the 2011 Las Conchas Fire that burned 156,000 acres of New Mexico and the 257,314 acre Rim Fire that threatened Yosemite in 2013.

The 2014 NCA lays out many practical adaptation strategies. But science can’t tell us what our priorities are. It is up to us as a nation to decide how we value our natural resources, and nature, and how to rise to the challenges of our future. 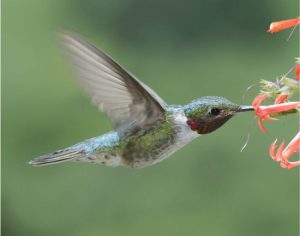