Yellowstone wolves take a blow to their rep

A well-publicized depiction of wolves revitalizing Yellowstone’s ecosystem is a myth, said writers for the NY Times‘ op-ed page and a Nature news feature last week.

This is the story:

For thousands of years, wolves shaped the ecology of Yellowstone. That changed in the twentieth century, when people succeeded in eradicating a competitor and perceived threat from the lower 48. In the predators’ absence, elk and deer overran the remaining wild lands, denuding streamside trees and shrubs, accelerating erosion, and degrading habitat for the birds and fish adapted to the old environment.

With the repatriation of grey wolves from Canada to the park in 1995, elk relearned wariness while browsing on open ground; they could not bury their heads in the grass all of the time and also keep a lookout for danger on four paws. This “landscape of fear” changed their behavior. In corners of the park frequented by wolves, aspen and willow began to recover. With the trees came beaver and songbirds, frogs and fish. The park still faces many difficulties, but the return of top predators has helped.

The wolf-elk-aspen trophic cascade story has become a classic ecological case study, a terrestrial demonstration Robert Paine’s keystone species concept, and a popular rejoinder to a competing story of the wolf as an expensive frivolity, pushed on the West by out-of-touch city folk. It reached mainstream audiences through beautifully illustrated National Geographic features and nature documentaries.

The success of the story has fueled further research on this complex system, which has tended to complicate its appealing simplicity. Wolves are not the only influence on elk. Drought, bears, and hunters, and development outside the park also influence elk numbers.

Matthew Kauffman’s lab at the Wyoming Cooperative Fish and Wildlife Research Unit in Laramie challenged the tree recovery story in 2010 with research showing growth patterns did not match the timing of wolf disappearance and return. Kristin Marshall and her colleagues in Fort Collins, CO, found that willow shrubs were not recovering so well, and to the extent that they were, the protection afforded by high water from beaver dams might be the important factor. The Fort Collins group thinks that the original loss of the wolves is not so easily reversed.

In the last week, two articles have publicly questioned the Yellowstone wolf story, arguing that it has merely replaced the big bad wolf with another legend, to the detriment of science.

In an op-ed for the New York Times Sunday Review, Arthur Middleton, a former graduate student in Kauffman’s lab and now a postdoc at Yale, asked “Is the wolf a real American hero?” (9 March 2014):

“We now know that elk are tougher, and Yellowstone more complex, than we gave them credit for. By retelling the same old story about Yellowstone wolves, we distract attention from bigger problems, mislead ourselves about the true challenges of managing ecosystems, and add to the mythology surrounding wolves at the expense of scientific understanding.”

In a Nature news feature, science reporter Emma Marris questioned the role of apex predators in “Rethinking predators: Legend of the wolf” (7 March 2014):

The tourists gushed: “We watched all about the willows on this nature documentary. We hear that all the willows are doing so much better now because the wolves are back in the ecosystem.” That stopped Marshall short. “I didn’t want to say, ‘No, you are wrong, they aren’t actually doing that well.’”

More about this topic: 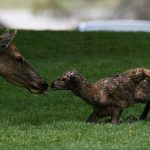