In defense of federally-funded research

A continued drive towards fiscal belt-tightening by lawmakers in Congress has spurred unprecedented attempts to curb federal investment in scientific research.

With a continued unwillingness by members of both major parties in Congress to tackle a comprehensive bipartisan plan to reduce the national debt that includes mandatory spending reform and tax reform, non-defense discretionary spending programs are continuing to be scrutinized for initiatives that seem duplicative or frivolous. For discretionary spending programs that fund scientific research, this means targeting grant proposals that may be perceived as frivolous.

The highlighting of research initiatives is nothing new. However, until recently, the lambasting of such programs was usually limited to a minority of lawmakers. These attempts to belittle the value of certain areas of scientific research were often tempered by members from both parties with more expertise on scientific research issues who recognize the role science investment plays in maintaining the United State’s global competitiveness.  Unfortunately, political extremists have grown to a level of influence that now a certain degree of catering to their agenda is apparently necessary to sustain normal order.

Just this past March, Congress approved by voice vote an amendment by Sen. Tom Coburn (R-OK) to the Consolidated and Continuing Appropriations Act of 2013 (P.L. 113-6) prohibiting the National Science Foundation (NSF) from funding political science research unless such research was certified to promote the national security or economic interests of the United States. The fact that the language was passed by voice vote meant that no Senator sought to contest the amendment during floor debate in a meaningful way.

More recently, House, Space, Science and Technology Chairman Lamar Smith (R-TX) floated a draft bill, the High Quality Research Act, which would require NSF to certify that every research project meet certain criteria as being in the national interest of the United States.  Though the draft legislation has garnered no shortage of push back, both from inside and outside Capitol Hill, federal efforts to redirect how science funding is distributed and determine what projects are funded are expected to continue, nonetheless. 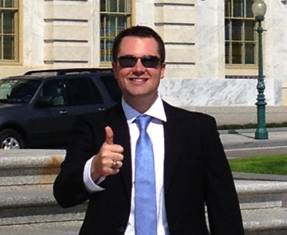 In the latest edition of The Ecologist Goes to Washington podcast, Matthew Berg, a recipient of ESA’s 2013 Graduate Student Policy Award, discusses his interactions with congressional offices who questioned the value of certain science research projects. Berg stressed the importance of emphasizing local connections that resonate with each particular congressional office. “Tailoring the message to each individual office was hugely important. I addressed the importance of [Texas A&M University] as a local economic driver to the local congressman I met with first. I pointed to water supply issues to the Senator from the San Antonio and Edwards Aquifer area. I brought up Galveston Bay and its huge regional importance to the Senator from the Houston area. Even when going in the general direction of water, I tried to work down into a little more detail that would mean much more to each office individually.”

Many items we take for granted today were discovered purely by accident. Further, dedicating federal dollars towards basic research initiatives has proven to provide significant returns on investment. This research has funded innovations in deep sea drilling, DNA fingerprinting, Doppler radar, the creation bar codes, and Google.  On Capitol Hill, Rep. Jim Cooper (D-TN) conceived the Golden Goose awards to highlight such examples of superficially odd federally-funded research that ended up leading monumental scientific breakthroughs that benefit society. The awards convey a message that had these seemingly, irrelevant studies not been funded, many important discoveries may have been missed.

When we restrict funds to programs that in the short-term appear “frivolous,” we close yet another potential avenue to an innovative breakthrough that could contribute to the nation’s quality of life. Given that investment in scientific research has consistently given us a great deal of return on investment, it doesn’t make sense that this funding, which constitutes less than one percent of the overall federal budget, should be further stifled. Critical towards maintaining this investment is continued engagement with policymakers, making sure they are aware of just how much scientific research benefits the communities in which they serve.