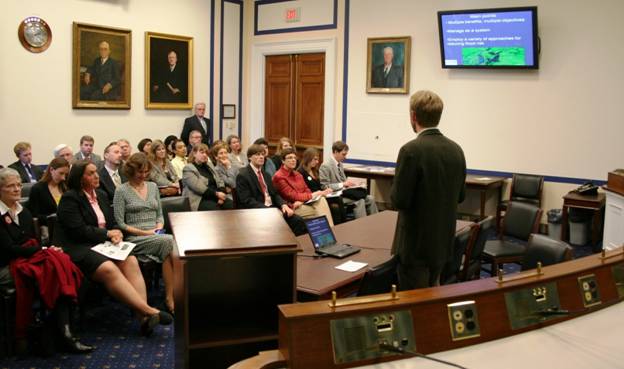 Featured speakers were Emily Stanley (University of Wisconsin, Madison, Center for Limnology) and Jeff Opperman (Senior Freshwater Scientist, The Nature Conservancy, Ohio Field Office).  The briefing drew 40 attendees, including congressional staff and representatives of federal agencies, NGOs and private organizations. The speakers highlighted the multiple benefits—both ecological and economical—of increased investment in floodplains and their role in lessening the severity of floods.

Stanley’s presentation touched on the many benefits floodplains have on flood attenuation, water quality, fish production, agriculture, aquaculture, groundwater recharge and maintaining ecosystem biodiversity. A striking visual showed that fish caught in a floodplain were remarkably larger than those of the same age, but from the main river channel.

Stanley’s presentation also illuminated the potential cost savings and increased efficiency that would incur through more reliance on floodplains than on aging infrastructure, such as levees. Her presentation noted that the U.S. Army 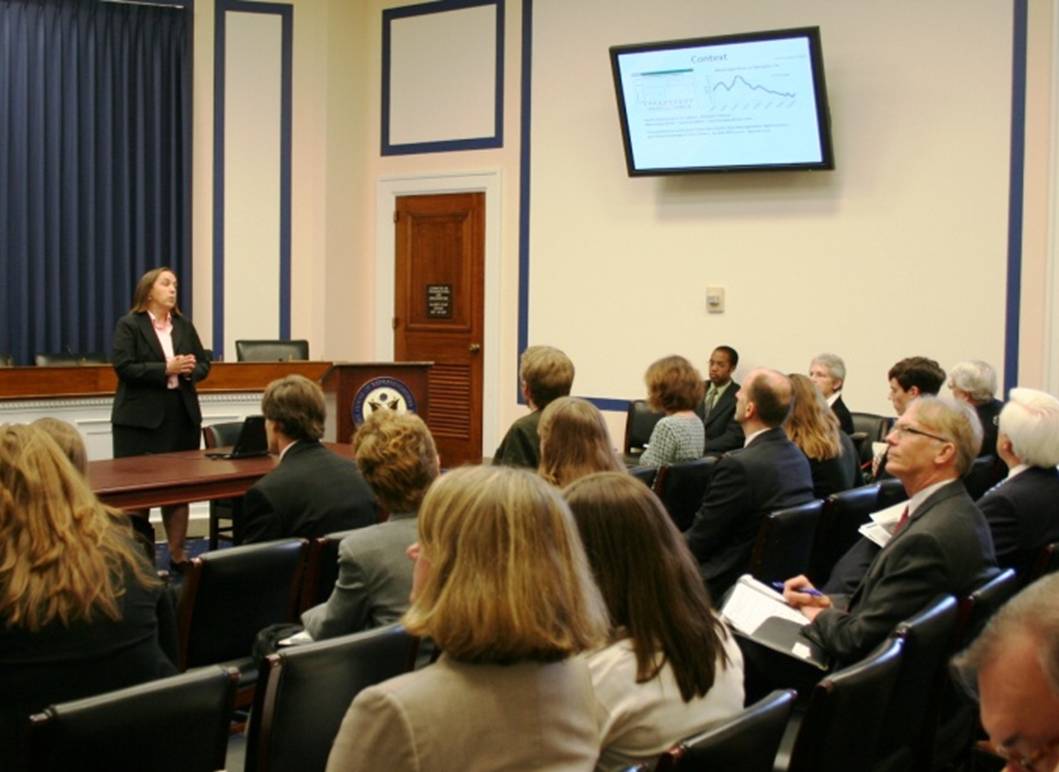 Corps of Engineers is estimating $750 million to $1.3 billion in damage to flood control structures alone for the Missouri River after the 2011 flooding, in addition to its annual operation/maintenance cost of $130 million.

In his presentation, Opperman highlighted the detriments of flood control efforts that focus primarily on increasing infrastructural investment, the ‘levees only’ approach. He noted that despite massive investments in flood control infrastructure, flood-related damages continue to rise. He also referenced the Yolo Bypass in Sacramento, California as a prime example of an effective working floodplain.

Opperman highlighted improvements in flood management along the Mississippi River since the flood of 1927. He contrasted the failed 1927 ‘levees only’ approach that managed the river in fragments with current efforts that manage the river as an entire system, relying more on the river’s floodplains natural ability to convey and store floodwater. While the death toll from the 1927 flood was at least in the  hundreds, and potentially thousands,, the 2011 Mississippi flood incurred no human deaths;  no land flooded that was not intended to be flooded.

The Army Corps of Engineers’ post-1927 approach in managing the Mississippi River as a system is embodied in the formation of the Mississippi River and Tributaries Project. The project coordinates Corps activities, such as levee and infrastructure construction and maintenance with management of “floodways,” areas of historic floodplain that can be reconnected to the river during high flood events, relieving pressure on levees. Opperman contends this management technique proved critical in 2011 and likely provided significant cost savings for communities along the Mississippi.

During a time when budget allocations are slim and infrastructural investments must be increasingly prioritized, policymakers need to consider new, innovative and cost-effective ways to manage floods. Floodplain advocates such as the Nature Conservancy assert that, in contrast to a centralized costly focus on man-made infrastructure, prioritizing investment in green infrastructure programs such as the Land and Water Conservation Fund, Farm Bill conservation initiatives and relevant Army Corps of Engineer programs will prove more cost-effective in the long run, promoting the preservation of human livelihoods and increasing our ability to reap the multi-faceted benefits offered by our natural environment.