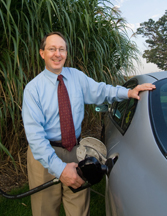 The promise of biofuels – fuel made from plant material – has taken a nosedive as scientists predict its generation could cause far more greenhouse gas emissions than it would make up for in preventing the use of fossil fuels.  But a Michigan State chemist has asserted in a paper in Environmental Science & Technology online that if sustainable management practices, such as no-till farming, are put to widespread use, then producing biofuels could take a fraction of the time to overcome its “carbon debt.”

“”Sustainable management practices, such as no-till farming and planting cover crops, can reduce the time it takes for biofuels to overcome the carbon debt.”

Bruce Dale (pictured) and his colleagues report that sustainable farming techniques, such as low- or no-till farming practices and planting cover crops, could reduce the time it takes for grassland conversion to overcome its carbon debt from the worst-case estimates of up to 1,000 years to as little as three years.

It’s all a matter of assumptions, and each model of biofuel sustainability uses different ones. Dale assumes that the use of sustainable farming practices is “more than 50 percent and increasing,” which contradicts many other accounts (see the Science policy forum paper by Robertson et al., Oct. 2008).  Incentives for sustainable farming could, of course, increase the relative value of biofuels in the grand scheme of alternative fuels.