During a 2016 National Oceanic and Atmospheric Administration (NOAA) expedition to explore a pair of World War II shipwrecks that lie off the North Carolina coast, marine scientists ensconced within glass-domed submersibles navigated to the Atlantic Ocean seafloor in the hope of profiling the fish communities residing on the wrecks. Some of the findings of this joint ecological–archaeological undertaking were published this week in the Ecological Society of America’s journal Ecosphere.

The two ships, a German U-boat and a Nicaraguan freighter, had not been seen by humans since they sank nearly 80 years ago during the Battle of the Atlantic. “These World War II shipwrecks are important historical monuments, but are also valuable habitat for fish,” said Katrina Johnson, the paper’s first author and a senior at Bates College in Lewiston, Maine. 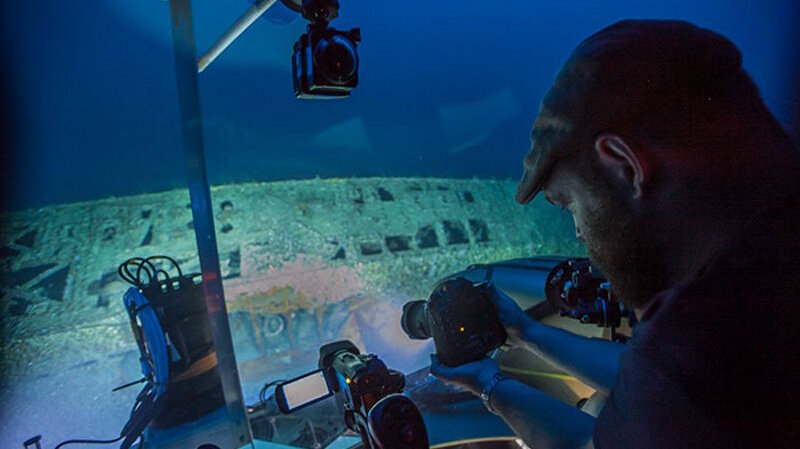 Joe Hoyt, Maritime Archaeologist with the NOAA Office of National Marine Sanctuaries, documents the damage to U-576. Photo courtesy of Robert Carmichael, Project Baseline – Battle of the Atlantic expedition.

Johnson, who grew up spending summers on a small Connecticut island only accessible by boat, jumped at the opportunity to join the research team analyzing the data gathered during the 2016 joint mission, even though she was not able to participate in the mission herself. The expedition team – led by the paper’s other coauthors – had fitted the manned submersibles with advanced video and laser scanning equipment, which elicited high-definition three-dimensional imagery requiring extensive processing and analyzing. The project lent itself well to Johnson’s long-standing interest in the underwater world, and she, like the rest of the team, was surprised by the extent of fish life thriving on the wrecks. 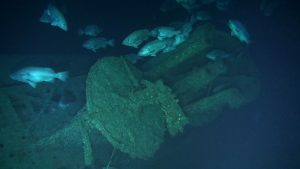 According to Avery Paxton, Ph.D., a co-author on the study and a research associate at the NOAA National Centers for Coastal Ocean Science (NCCOS) in Beaufort, N.C., the findings raise questions about how fish find these remote sites in the first place. “Since the shipwrecks are such small islands of habitat on the sandy seafloor, it was surprising to see so many large-bodied groupers, like snowy and Warsaw grouper, occupying the shipwrecks,” Paxton said. “This phenomenon warrants further study to determine how common this may be in other deep habitats.”

The researchers used lasers to acquire 3D snapshots of fish to a millimeter level of precision. For instance, the detailed photos allowed the team to measure the size of a grouper hovering beside the rivet of the U-boat’s hull or to document the position of a wreckfish beside the barrel of the deck gun.

For fish community ecologists, these kinds of details are essential. They can explain why fish populations decide to call a shipwreck home rather than a rocky reef, for example, and whether the thousands of shipwrecks and other submerged human-made structures scattered on the ocean floor could serve as a significant source of fish habitat in the future.

“Seeing so many large predators on such a relatively small habitat begs the question of how and whether they are feeding on these sites,” said Chris Taylor, Ph.D., a research ecologist at NCCOS and a co-author of the study. “We know some related species aggregate in very large numbers to spawn, and some species like Goliath grouper tend to aggregate on artificial habitats.  But we don’t think that’s happening here.” 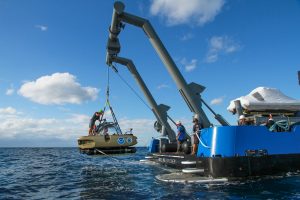 The success of the joint archaeological–ecological mission has opened the door to additional collaborative ventures, which could potentially be carried out by unmanned underwater vehicles in the future. 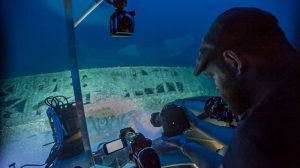