Light-emitting diode, or LED, light bulbs improve the lives of people the world over, especially those who live far from electrical grids. They foster improved access to education and healthcare, decrease reliance on fossil fuels and batteries and make illumination safer for billions of people worldwide. 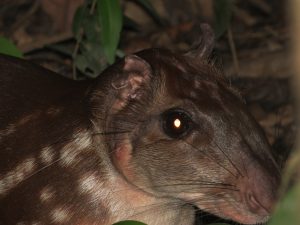 However, no technology is without its pitfalls, something ecologist Mark Bowler and an international team of tropical ecologists examined in a recent study published in the Ecological Society of America’s journal Frontiers in Ecology and the Environment. Bowler had suspected that the advent of LED lights had increased the amount of time both commercial and subsistence hunters spent hunting at night, especially for species that can be hunted by spotlighting — shining a flashlight into the darkness, which causes the animals caught in its beam to freeze, giving hunters better odds of hitting their target.

Surveying hunters in the tropics via an intensive series of interviews and questionnaires, Bowler and his team were able to quantify their conclusions: LED flashlights let people in the tropics hunt more frequently, and more successfully, in the dark hours of the night.

These data explain shifts in conservation statistics that biologists have been recording for some time. Researchers studying catch per unit effort (CPUE) have sometimes noted large, significant increases in hunting efficiency over the past decades, without knowing how to explain those jumps. Anyone who has worked in tropical forests understands the value of LED lights and is familiar with the sight of discarded batteries. Energy-saving LEDs last longer, work better and use fewer batteries than other light sources, including incandescent lights and kerosene.

Bowler and his team focused their research on the effect of LED lights on the hunting of paca and tapir  — two nocturnal mammals. They found that in some places, night hunting went from being rare to representing nearly half of all animals hunted. 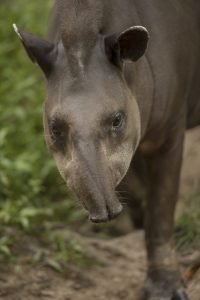 “It is hard to explain this large jump by other means,” Bowler says. “What was surprising was how this seems to have been overlooked by researchers and wildlife managers in the tropics. The extent of the change in ‘Catch Per Unit Effort’ for some species  — paca in our paper  — is also surprising.”

Where night hunting becomes significantly more prevalent, different species  — especially nocturnal species  — are more at risk than they were before. And, in unregulated ecosystems, that can mean that the number of these animals hunted increases. The authors of this study focused specifically on mammals but posit that the concept likely holds true for other species hunted with spotlights at night, such as caiman and other crocodilians.

“Where areas are open-access and unmanaged, hunters will say they’re hunting as much as they can. They’re going in surreptitiously, and it might be more commercial,” Bowler explains.

In areas where the local communities themselves can manage and regulate subsistence hunting, LED lights affect the amount of time and effort people spend hunting, but do not have a noteworthy influence on the area’s natural resources. They simply make the people’s lives easier. The authors emphasized that LED lights in the tropics are overwhelmingly beneficial, but that their introduction highlights the benefits of community management.

“Where local people are allowed land tenure and are empowered to manage their own resources, LED lights need not lead to increased harvests and reductions in populations of nocturnal species,” Bowler explains. “Community management is the best way to conserve large tracts of forest intact, and the introduction of LEDs emphasizes the importance of promoting this model of conservation in inhabited tropical forests.”