Over 65 years, Chinook salmon hatcheries in the PNW have skewed towards releasing larger fish that are more easily preyed upon

Fish permeate the culture of the Pacific Northwest (PNW). In particular, the iconic salmon has been an important part of the region for thousands of years, from ancient Native American trade routes and legends to modern fishing and sporting. In the area of the Salish Sea – inland waterways including Puget Sound, the Strait of Georgia, and the Strait of Juan de Fuca – the cultures, economies, and technologies there are all impacted and influenced by salmon. It is no wonder, then, that salmon are of high conservation interest and constitute a large proportion of hatchery-raised fish in the region.

A recent study in the Ecological Society of America’s journal Ecosphere examines hatchery practices in regard to how the Chinook salmon that are released back into the natural waterways in the PNW are affecting wild populations.

In the face of changing climate, ocean conditions, freshwater habitat loss, and increased human consumption, many salmon populations in the PNW are depleted relative to historical abundance. A large salmon, for instance, is a prized and sought-after catch for a sport fisher. There is a growing demand for salmon hatcheries to provide food security and to bolster fish populations; many hatcheries release fish after they reach a certain age or size, with a goal of increasing opportunities for commercial, recreational, and indigenous fishers.

Salmon hatcheries in the PNW, however, seem to be releasing young fish when they are the desired size for predators to prey upon. In this case, bigger does not equal better for the salmon population’s survival. 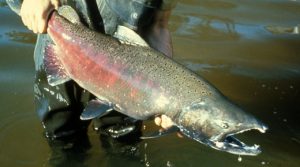 Chinook salmon are also known as king salmon. They depend on healthy estuaries to spawn, which also provide habitat for invertebrates and smaller fish. Photo courtesy of U.S. Fish and Wildlife Service.

Chinook salmon – named for the native Chinookan peoples, also known as King salmon – is the largest Pacific salmon species. As juveniles, they migrate to the ocean in their first or second year of life and return to freshwater to spawn as adults 1–6 years later. It is as juveniles that populations are most vulnerable to predators. “Survival during the first year at sea has a large impact on the total lifetime survival and adult abundance of Chinook salmon in the Pacific Northwest,” says lead author Benjamin Nelson. “This is a problem for other species that depend on them, like endangered killer whales, and for people who depend on them, such as Native American communities and commercial fishers.”

Researchers analyzed more than 65 years of records and data on hatchery-origin Chinook salmon in the Salish Sea to examine long-term changes in hatchery release practices. It appears that hatcheries have progressively released juvenile fish at bigger sizes and they are currently releasing them in a larger size range preferred by fish, bird, and marine mammal predators. A 2017 study using GPS tags found that harbor seal feeding increased shortly after hatchery releases of large coho salmon, but interestingly, the seals did not respond to far more abundant but smaller-sized Chinook releases a few weeks later. Many predators show similar large-size (over 10cm) preference in studies over the years showing that smaller juvenile salmon encounter fewer predators. Thus, hatchery-origin chinook are more likely to be eaten before they have a chance to spawn.

Not even the commercial fisheries benefit from hatcheries releasing larger fish. “Despite the fact that larger juvenile salmon are being released from some Salish Sea hatcheries,” says Nelson, “the average size of the adult salmon captured by commercial fisheries has actually decreased along the west coast of North America. Some scientists have speculated these size trends could be because of poor ocean conditions, which may reduce the availability of food for growing salmon, while others believe that long-term size selectiveness by fisheries, or selective removals by predators (targeting larger, older fish) could play a role. It is likely that some combination of these factors is responsible.”

Additionally, the researchers were surprised to find that hatchery Chinook are released in a narrow two-week window of time during May, while natural Chinook migrate to the ocean earlier in the year and over a much longer time frame. This could result in high survival if ocean conditions at that time are favorable,  but it could be detrimental when conditions are poor. Because ocean conditions change considerably from year-to-year, this could result in “boom or bust” dynamics.

“Just like a retirement portfolio,” explains Nelson, “returns tend to be more stable when its assets are well-diversified. It is reasonable to believe this applies to salmon populations, as well. A more diverse group of hatchery releases could be more robust to changing environmental conditions, resulting in more stable returns of adult fish in the future.”

With current marine survival rates at chronically low levels and with increasing demand for hatchery fish, understanding cumulative historical effects of hatcheries on ecosystems is essential for improving future hatchery practices and ensuring sustainable management. “Hatchery Chinook salmon in the Salish Sea have become increasingly similar over the last 50 years, in terms of both their size and the time at which they are released,” remarks Nelson. “This loss of diversity could have several negative consequences, not just for salmon, but for other species that depend on them.”