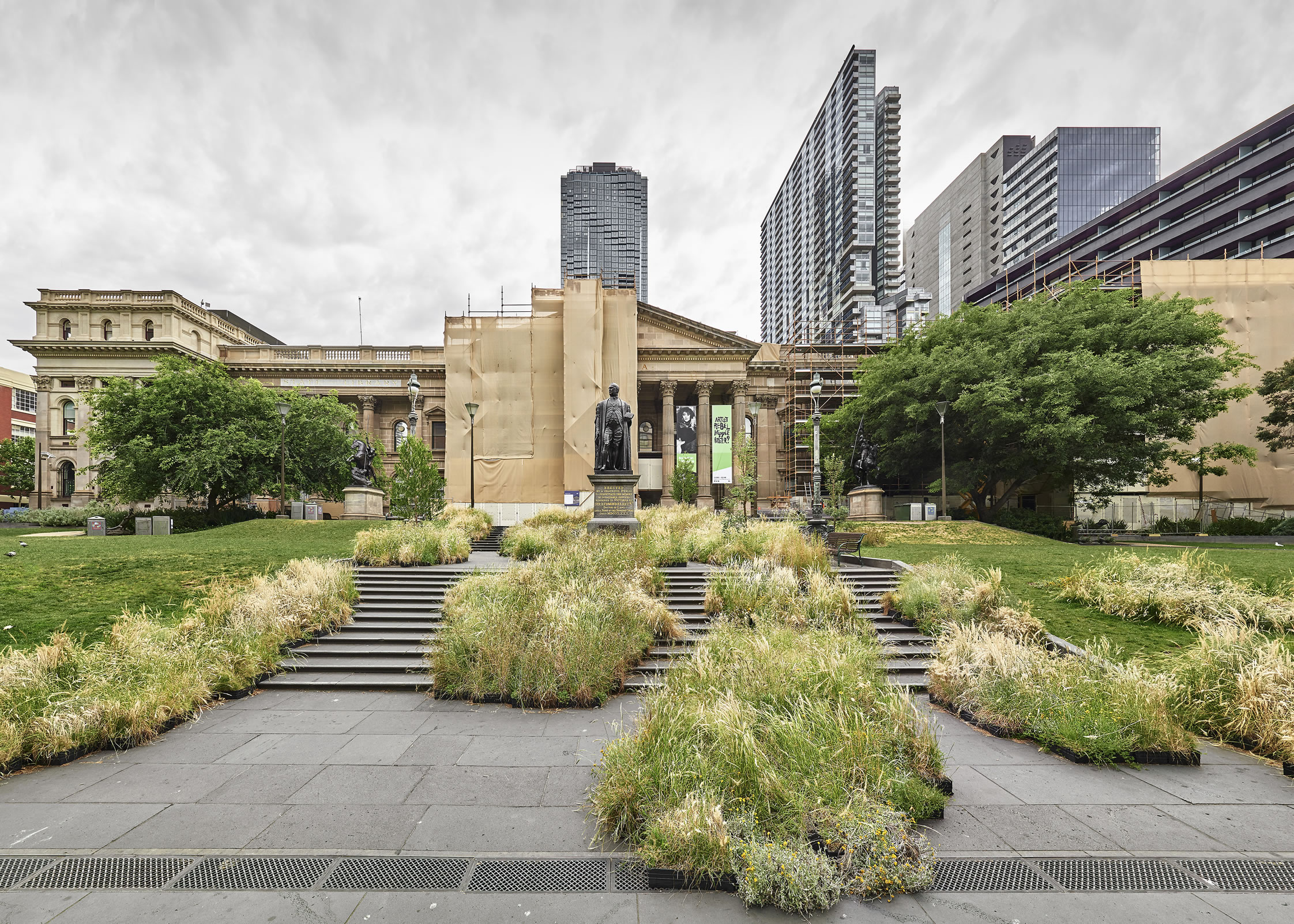 The “Grasslands” Pop-up Park outside the State Library of Victory increased spider biodiversity at the site over six weeks. Photo courtesy of Matthew Stanto.

Pop-up stores, restaurants, and theaters are an increasingly common sight in cities around the world, where they add to the diversity of commercial options available to city dwellers. But while the pop-up phenomenon is normally associated with urban activities like shopping and dining, it has also caught the attention of city planners, ecologists, and conservation scientists striving to find new ways to integrate natural features into rapidly urbanizing areas.

Large city parks and other undeveloped areas, commonly referred to as “greenspaces,” are known to deliver numerous socioecological benefits to urban residents and wildlife. However, skyrocketing rates of urban growth are leaving little room for the inclusion of conventional greenspaces in urban landscapes worldwide. “Pop-up parks” (PUPs) – usually small greenspaces, although they vary greatly in both size and composition and can be permanent or temporary fixtures – represent one possible means to help meet the demands of urbanites for more opportunities to connect with nature in their neighborhoods. Moreover, PUPs serve important conservation functions by providing small-scale habitat refuges for a wide variety of threatened plants and animals in urban environments, and they deliver a suite of ecosystem services to urban residents and wildlife alike.

In a study published in the Ecological Society of America’s journal Frontiers in Ecology and the Environment, lead author Luis Mata – ecologist with the People, Nature, Place research program at Royal Melbourne Institute of Technology University’s Centre for Urban Research – and colleagues combine a case study with a systematic literature review of PUP-related research to explore the socioecological potential of PUPs in greater depth. “Our goal was to provide empirical evidence of the capacity of PUPs to deliver positive biodiversity outcomes, and in reviewing the direct or implied evidence from the literature regarding the possible social benefits of PUPs,” explains Mata.

To examine the effectiveness of PUPs on urban biodiversity directly, the authors chose a PUP in Melbourne, Australia called “Grasslands,” a six-week art–science collaborative project in which planters containing native grasses were situated around the State Library of Victoria. The study tests what effect the PUP had on insect and spider diversity at the site. Counts periodically conducted over the course of the six-week duration of the PUP reveal that insect and arthropod species richness increased markedly. “The plant resources provided by Grasslands boosted and sustained functionally and taxonomically diverse insect and spider communities, thereby contributing to the provision of important ecosystem services like pollination, pest control, and nutrient cycling,” says Mata. Insect pollinator abundance, for example, was approximately 161% higher when the planters were present. 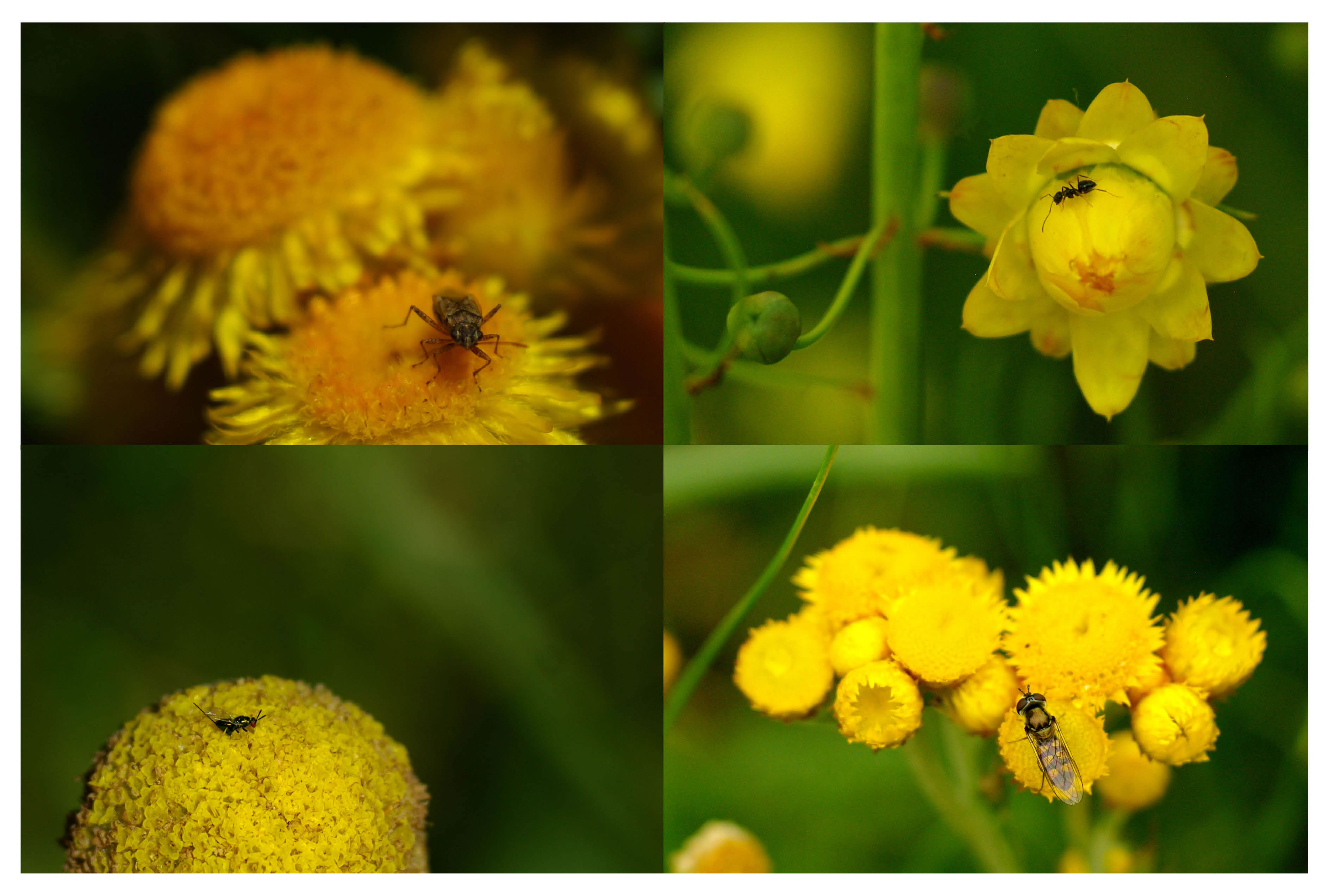 The study examined the effects of PUPs on site biodiversity, exemplified by these insects found in the Grasslands PUP. Photo courtesy of Luis Mata.

Mata et al.’s review of PUP-related studies provides strong evidence that even small greenspaces confer a wide variety of social benefits to urban residents, although these differ somewhat from the benefits provided by larger greenspaces; for example, the small size of PUPs constrains more robust physical activities such as walking and jogging, and limits exposure to better air quality. Survey participants in several of the studies included in the analysis particularly emphasized the opportunities for social interactions that PUPs afford, but other positive benefits commonly cited include physical and psychological restoration; reductions in computer, cell phone, and television “screen time;” and more overall time spent outdoors.

Greenspace effectiveness is largely dependent on its design, yet the authors find that little research to date focuses on identifying what types of PUPs maximize benefits to both urban residents and urban wildlife – a knowledge gap that the authors contend must be addressed in order for PUPs to reach their full potential. “We’re hoping to integrate this socioecological evidence to argue for the creation of a research agenda to explore the benefits of PUPs, and discussions about what types and features of PUP would be best suited to achieve these benefits,” says Mata.

Global trends of urban expansion and intensification show no sign of abating and disconnects between urban residents and nature continue to become more deeply entrenched as a result. PUPs and similar small-scale greenspaces provide additional opportunities for residents of cities to experience and engage with nature and can enhance urban biodiversity. The authors stress, however, that PUPs should be viewed not as replacements for conventional greenspaces, but rather as supplements to traditional parks and undeveloped areas that, despite their size, can provide a similar suite of benefits to urban residents and wildlife as that of their larger counterparts.

The Ecological Society of America (ESA), founded in 1915, is the world’s largest community of professional ecologists and a trusted source of ecological knowledge, committed to advancing the understanding of life on Earth. The 9,000 member Society publishes five journals and a membership bulletin and broadly shares ecological information through policy, media outreach, and education initiatives. The Society’s Annual Meeting attracts 3,000-4,000 attendees and features the most recent advances in ecological science. Visit the ESA website at https://www.esa.org.