Commercial corn varieties lose ability to communicate with their own defenders

This post contributed by Heather Kirk,  a post-doctoral researcher at the Institute of Agricultural Sciences at ETH in Zurich, Switzerland 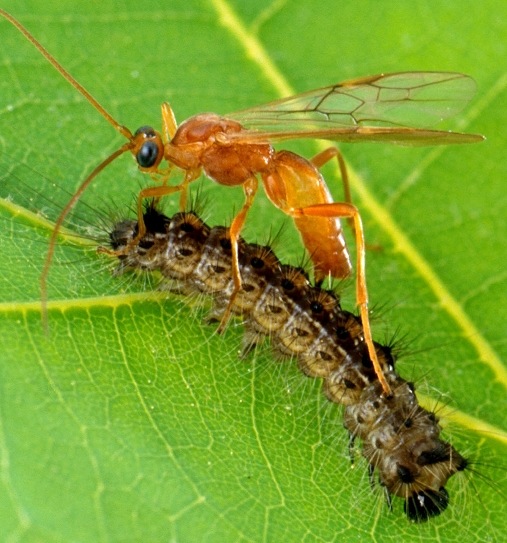 In the science fiction horror film “Alien” and its sequels, extraterrestrial monsters stalk human space travelers, and ultimately use their human prey as hosts for their own offspring.  The alien implants its offspring into the body of its human host, where said offspring grows undetected, until it eventually (and gruesomely) bursts out of the chest cavity of the unfortunate carrier, killing him or her in the process.

Amazingly, tiny versions of such “aliens” are also commonplace here on Earth, and can be found in abundance in many types of agricultural and natural ecosystems.  For example, parasitoid wasps lay their eggs inside the eggs or larvae of other insects.  The parasitoid eggs hatch inside the living body of their hosts, the parasitoid larvae feed on the host for several days or weeks, and then they burst out of their host’s body, usually killing it in the process.

An interesting example can be found among the insects that feed on corn crops around the world.  The spotted stemborer moth is a major pest of corn crops globally.  As their name implies, spotted stemborer caterpillars bore through the stems of corn plants, and can virtually destroy entire corn fields.  These stemborers are in turn attacked by at least two species of parasitoid wasps; one of these species lays its own eggs in the eggs of the moth, while the other lays its eggs in the caterpillars.

Even more interesting than the grisly lifestyles of the parasitoids themselves, is that some plants can recruit them in order to defend themselves.  The system works something like this:  a pest (such as the spotted stemborer) lays its eggs on the plant, and eventually the eggs hatch, and the larvae start to eat the plant.  The plant recognizes that it is being attacked and releases an array of “alarm” chemicals from its leaves.  These alarm chemicals alert parasitoids to the presence of the herbivore on the plant, and the parasitoids rush to the site of attack.  They parasitize the offending herbivore, thereby indirectly aiding the plant.

In some cases, parasitoids can greatly reduce the number of herbivores on plants, and as a result they have been used in many crop systems as part of effective pest reduction strategies.  By exploiting such natural defense systems in plants, often the use of pesticides can be reduced, and such low-cost biological pest management strategies can be very effective in areas where small-holder farms are common, and where resources are lacking.

As described in a recent paper published in Ecology Letters, researcher Tamiru and colleagues tested whether corn varieties differ in their abilities to attract parasitoids in response to attack by the spotted corn borer.  In particular, the authors wanted to know whether commercially available corn varieties could attract parasitoids as effectively as land-races (in other words, varieties that are locally available and haven’t been subjected to intensive commercial breeding programs).

As we continue into an era of increasing food prices, and ongoing food shortages in many parts of the world, it is becoming increasingly important to develop ecologically sound and effective strategies for sustaining food production, especially in areas where small family farms are common, and resources are limited.  These recent findings highlight the complexity of developing suitable insect resistant crops, and also emphasize the importance of preserving heirloom crop varieties or landraces, which may harbor important traits that have been lost in widespread commercial cultivars.