Spontaneous fermentation: the role of microorganisms in beer 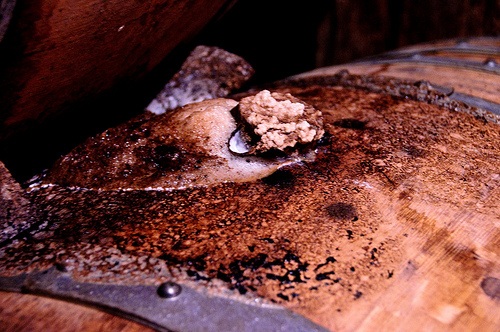 The four main ingredients in most modern beer recipes are water, a starch such as barley (usually malted), hops and yeast. And each ingredient has a very specific role in the brewing process. Any home brewer knows that the quality of the water used in brewing beer can significantly impact the flavor of the finished product. For example, excessive amounts of fluoride in the tap water can alter the flavor (and then some) of beer, not to mention the presence of bacteria and other microorganisms naturally found in tap water which can turn beer sour, acidic or give it a foul odor.

According to a study published in a 2003 issue of the International Journal of Food Microbiology, the “most hazardous [bacteria] for the brewing industry are those belonging to the genera Lactobacillus and Pediococcus. In the period 1980 to 1990, 58 to 88 percent of the microbial beer-spoilage incidents in Germany were caused by lactobacilli and pediococci.” For this reason, brewers always sterilize the water and any utensils or storage vessels used during the brewing and fermentation processes for most types of beer. Hops, another very common ingredient in beer, also have antimicrobial properties; however as the study pointed out, Lactobacillus brevis, the most important beer-spoiling bacterium is resistant to hops.

Hops, which are the flower cones of the climbing plant Humulus lupulus, serve another purpose as well. That is, hops were added to the brewing process to balance out the malt’s sweetness, creating the familiar bitter flavor found in India Pale Ales (IPA), Imperial IPAs and other ales. Hops have likely been a staple beer ingredient beginning with beer brewed in 8th Century Bavaria.

Barley grains, on the other hand, contribute the malty, sweet flavor to beer and, perhaps more importantly, serve as a key player in the fermentation process. The grain is soaked in water to encourage germination, and then quick-fired to cease growth and extract moisture. Any starch, such as wheat or rice, can be used, although malted grain is the most common ingredient due to its rich source of amylase. The process of converting starch into sugar by the action of acids or enzymes like amylase is called amylolysis in beer brewing.

In addition to water, which naturally carries microorganisms, yeast is itself a microorganism. Unlike those previously mentioned, however, yeast is solely responsible for the fermentation of the beer. Without the yeast, beer would be nonalcoholic and noncarbonated. There are several species of brewing yeast—such as Saccharomyces cerevisiae commonly used for ales and S. pastorianus sometimes used for lagers—that are essential for the brewing process. In the modern brewing process, yeast strains are cultivated to produce different results, such as a slower metabolic rate for beer (versus the fast rate needed for dough to rise). 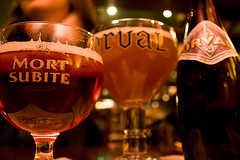 However, yeast was not always carefully selected for greater control in the brewing process—that was aided by the discovery of yeast’s role in fermentation by Louis Pasteur in 1857. In fact, beer was spontaneously fermented by wild yeasts for most of its existence. That is, grain or other starches mashed with hot water—resulting in a substance called the wort—was left exposed to the environment, attracting wild yeasts to metabolize the sugars.

The exposed ingredients also attracted other microbes, such as bacteria and more surprisingly antibiotics. According to a Wired Science article published last week, a study found that ancient Nubians may have stumbled across antibiotics through spontaneous fermentation centuries before Alexander Fleming discovered penicillin in 1928. As Jess McNally wrote in the article:

[Mark] Nelson [the lead author of the study] found large amounts of tetracycline in the bones tested from the ancient population, which lived in the Nubian kingdom (present day Sudan) between 250 A.D. and 550 A.D. and left no written record … Tetracycline is produced by a soil bacteria called streptomyces, which is how it was discovered by modern society in the 1940s. Streptomyces thrives in warm, arid regions such as that of ancient Nubia, and likely contaminated a batch of beer.

Spontaneous fermentation is still used in lambic beer, brewed only in the region near  Brussels, Belgium, although it is not as spontaneous as it once was. Many of the key yeasts and bacteria—such as Brettanomyces bruxellensis and B. lambicus—that give the beer its distinct sour flavor are kept in the cool dark cellar of the brewery, awaiting the wort. The unpredictability of wild yeast species creates a distinct flavor in every batch. However, even the somewhat controlled conditions of the lambic brewery can attract unwanted bacteria and other microorganisms in the summertime.

Similarly, in the time of Benjamin Franklin, spontaneously fermented beer likely contained its fair share of bacteria, although it was not yet discovered. On the other hand, due to the common use of hops and, more importantly, the boiling process involved in making the wort, beer was far less likely to include harmful bacteria. At least compared to drinking water which was frequently contaminated with public waste, an issue Franklin repeatedly tried to address in New England.

UPDATE: The original lead of this article–Benjamin Franklin, one of the Founding Fathers of the United States, was once quoted as saying: “In wine there is wisdom, in beer there is Freedom, in water there is bacteria.”–has been revised. While water quality issues were of concern at the time, the term “bacterium” was not introduced until 1838.