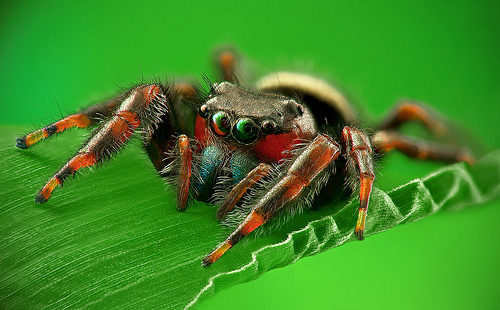 Male jumping spiders (Phidippus clarus) size one another up before engaging in a fight—whether the aggression is based on rights to mating or territory—and in many cases, the pre-fight displays are sufficient to deter physical contact. The males do not nest but instead wander between female nests looking for opportunities to mate. The females, on the other hand, are not nomads—they build nests from silk and leaves in which they wait while they draw closer to sexual maturity.

According to Damian Elias of the University of California at Berkeley and colleagues in a recent Behavioral Ecology study, this nest building behavior is what determines a difference in fighting styles between males and females. Specifically, the female jumping spiders forego the pre-fight dancing and attack to kill. Said co-author Carlos Botero of the National Evolutionary Synthesis Center in Durham, NC in a press release:

Males rarely get to the point where they solve things by fighting. Before the actual fight there’s a lot of displaying. This allows them to resolve things without injuring themselves…[The females] don’t give up, even when their opponent is beating them to a pulp. They keep going until one of them is dead, or severely injured.

The researchers pitted nesting and homeless female spiders against one another to determine if territory was the main cause of the overt aggression. They discovered that, while the nests played a role in the fighting, it was not the primary reason; instead, those females who were closer to reproductive age tended to win the fights regardless of strength or size.

Elias and colleagues found that the females at the brink of sexual maturity, who had more to lose in a battle and were less guarded, went for the kill almost every time. The females who were ready to reproduce were about to molt, so without the hard exoskeleton, they were more vulnerable to future attacks. Therefore, the nests were required to ensure safety during molting, laying eggs and rearing young. It seems, then, that the vulnerability of the sexually mature females prompted a deadly aggression. As Elias said in the release:

Finding a good nest becomes more critical the closer they are to maturing. In female fights it’s not how big or heavy they are, but how badly they want it. That trumps size and weight and whether it’s her territory. They fight until they have nothing left.