Social distancing: a journey to understand manes and myself

Social distancing: a journey to understand manes and myself 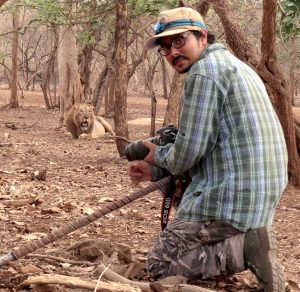 ‘Social life’ is rare yet fundamental to the world around us. A busy swarm of bees, a disciplined trail of ants or an enigmatic pod of dolphins are generously attractive to the human mind because they are so relatable. We humans are a ‘hyper-social’ species, and much of our daily experiences revolve around companionship and familial ties. I believe it were these experiences that inspired me to choose a path to understand the nuances of social life. Newly minted with a PhD on sociality in Asian lions, I joined the University of Minnesota in 2019 to pursue some more of the whys and hows of group living in lions, wolves and elephants.

I remember the September of 2019 all too well — a tropical soul staring with awe at the changing colors of the trees around, it was my maiden encounter with the North American fall. As much as it took me to move across continents and settle in a new place, the thoughts of collaborating with biologists whom I have secretly idolized for long kept me going. I was happily pulling in late nights, storming through new ideas and straddling social bridges across different time zones. As the leaves dropped and the trees turned bare, I slowly began joining the dots between the information that I had gathered studying lions in India for a decade with long-term research from the African savannah. With every computational code running successfully on my computer screen, I thought I understood a bit more about the patterns that we had witnessed while observing lions in the wild. 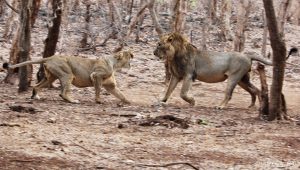 Lions are quintessential symbols of sociality because they are not only charismatic and powerful predators, but they have fascinating family lives. A pride contains many females who are matrilineally connected as mothers, daughters, grandmoms and aunts, their cubs and an interacting group/coalition of adult males who guard the pride and father cubs. However, not everywhere do lions behave similarly, and through a collaborative study with the Lion Center at the University, I wanted to know why. Comparisons between long-term data from three well studied lion populations: Serengeti and Ngorongro in Tanzania, and Gir in India might hold some answers. In each of these populations, researchers like me have intimately followed individual lions, gaining perspectives into their personal triumphs and tragedies. Bringing all this data together, we understood that group living in lions is flexible and can be more of a ‘choice’. Lionesses tend to avoid males in all the three populations because the males are bigger and regularly muscle the lionesses away from the dinner tables. Lionesses are the main hunting force in a pride while males often scavenge and steal from the females’ quarries. Thus, in areas such as the Ngorongoro Crater where large prey like cape buffalo is abundant, females ‘choose’ to spend more time with males because sharing resources is not that costly. Also, it’s kind of helpful to have the big guys around when one must hunt formidably large buffaloes. But in areas such as Gir (where prey is small) and the Serengeti in the dry season (when large prey such as zebra and wildebeest migrate away from the plains), lionesses ‘socially distance’ themselves from the males to avoid their small dinner plates from getting robbed. They even roar less frequently to avoid giving away their locations to the males. And in such scenarios if you are perceptively observant, you can hear the mothers hushing their cubs “shut up and eat your food, daddy’s not far away!”

While such findings kept me busy through my first Minnesotan winter, the crazy cold and snow forced me to hibernate in my cozy, warm apartment wishing that I could work from home. Oh! only if I knew what was coming for us all! Winter receded, the tulips bloomed, and the cardinals flew like flashing rubies. It got warm enough to be out in the sun and the breeze, but alas the world had plunged into a pandemic by then. What I experienced for the next one year and a half (and counting!) was something that I was not prepared for, no one was. Initially, my life became centered around my computer screen, and like many others, my waking hours were swamped with copious mugs of tea and fussing about work. I soon mimicked the species that I studied with a messy mane and beard! At some point I could hardly perceive why I was being so busy —- pitfalls of being an early career researcher straddling the past, present and worrying constantly about the future.

I was never an outgoing person (except when it came to the wilderness), had a limited ‘social life’, and I enjoyed my solitude. I derived reassurances from the quietness around until that choice was taken from me, from all of us. I languished for a conversation, for an outdoor meeting, for a fleeting interaction. I would watch cars on the streets for hours on end through my window, just to feel ‘mobile’. By then, the regular bunnies in our neighborhood, the scurrying raccoon foraging from the garbage bins and the squirrels all knew my name because I would greet them with the same fervency as I would to a neighbor. And it is in these moments that I have recounted to the mirror with gratitude a phone call from a distant friend checking on me, or my parents calling to just listen to me being busy, family who threw an arm around me during the most sleepless of nights, my mentors and lab-mates who dropped desserts and zoomed hope and support into my worries, calls at odd hours assuring that family and friends were safe and healthy, the flowers sent to my doorstep, or a newfound connection that made me believe that it was worth hanging in there, a mark of love that came from the most unexpected and unlikely place but restored faith in all things beautiful.

The pandemic has taught me a few things, it gave me time to contemplate. It allowed me to muse over data to understand more about lions, and in so doing I peeked within a few more layers of my social life. And I say this now that it is in adapting (like the lionesses) that we can choose to be the very best of us even in times of despair and loneliness. Easier said than done, because I have also understood that ‘social distancing’ as a way of regular life is more welcoming when it remains a choice, and not a necessity. For the lionesses, I believe it’s both.

Stotra Chakrabarti is a Postdoctoral Research Associate at the University of Minnesota, and his expertise is in studying the links between animal behaviour and ecophysiology, population ecology, predation ecology, and conservation biology. He will start as a Visiting Assistant Professor of Ecology at Macalester College from Fall 2021. Stotra addresses questions regarding the evolution of sociality, optimal strategies such as mating systems, group size and predator-prey size efficiency, animal cultures, using a diverse set of biological models: from lions to wolves, elephants and deers. He believes science does not happen in containment and hence his research remains primarily collaborative. He enjoys teaching and mentoring, and is a big fan of poetry, soccer, cheesecakes and science communication. Recently he has been inspired into knowing more about animality studies within human culture. He is also part of the Animal Behaviour Collective (Twitter: @ABCmicrogrants) that provides microgrants and mentorship to undergrad and grad students pursuing animal behaviour studies.