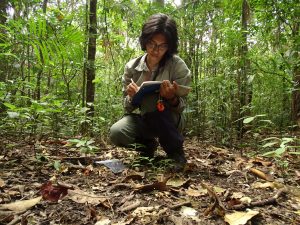 Abstract: (1) Whether fragmented ecosystems can maintain diversity is a key ecological question. The ability of fragmented forests to support diversity is determined by both landscape-scale metapopulation dynamics and within-patch mechanisms that govern species coexistence. Within-patch dynamics can be affected by proximity to forest edges. Edge effects on abiotic and biotic processes can alter species’ performance and species interactions, but it is unclear how edge effects bear upon the long-term ability of fragmented forests to maintain diversity. (2) We apply modern coexistence theory as a framework to predict the impact of edge effects on species coexistence. Using field data for a tropical tree community, we parameterized a spatially explicit simulation model to quantify how habitat and density dependence during seedling establishment affect diversity of later life stages. We matched simulated future communities to observed patterns of diversity and community structure for established seedlings and adults, coupled with sensitivity analysis of simulated effects. (3) We found that early recruitment dynamics contributed to community structure at older life stages, corroborating empirical work on the importance of early life-stage dynamics for diversity. Edge effects reduced the diversity maintained in patches. The progressive loss of diversity was not due to changes in relative competitive ability (fitness differences), but due to weaker stabilization via density-dependent seed mortality. Results were robust to wide changes in the absolute values of model parameters, suggesting that variation in the strength of individual processes did not change their relative importance for diversity. (4) Synthesis. Weakening of stabilizing processes that promote species self-limitation in ecological communities could compromise the ability of habitat fragments to maintain diversity. Quantifying the relative importance of intraspecific versus interspecific interactions—to assess stabilizing mechanisms and fitness differences—can help evaluate when habitat amount versus quality plays a larger role in maintaining diversity of fragments. 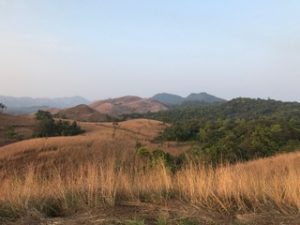 Abstract: Madagascar is regarded by some as one of the most degraded landscapes on Earth, with estimates suggesting that 90% of forests have been lost to indigenous Tavy farming. However, the extent of this degradation has been challenged: paleoecological data, phylogeographic analysis, and species richness indicate that pyrogenic savannas in central Madagascar predate human arrival, even though rainfall is sufficient to allow forest expansion into central Madagascar. These observations raise a question—if savannas in Madagascar are not anthropogenic, how then are they maintained in regions where the climate can support forest? Observation reveals that the savanna–forest boundary coincides with a dispersal barrier—the escarpment of the Central Plateau. Using a stepping‐stone model, we show that in a limited dispersal landscape, a stable savanna–forest boundary can form because of fire–vegetation feedbacks. This phenomenon, referred to as range pinning, could explain why eastern lowland forests have not expanded into the mesic savannas of the Central Highlands. This work challenges the view that highland savannas in Madagascar are derived by human‐lit fires and, more importantly, suggests that partial dispersal barriers and strong nonlinear feedbacks can pin biogeographical boundaries over a wide range of environmental conditions, providing a temporary buffer against climate change.

Abstract: Global change stressors such as drought and plant invasion can affect ecosystem structure and function via mediation of resource availability and plant competition outcomes. Yet, it remains uncertain how native plants respond to drought stress that co‐occurs with potentially novel resource conditions created by a nonnative invader. Further, there is likely to be temporal variation in competition outcomes between native and nonnative plant species depending on which resources are most limiting at a given time. Interacting stressors coupled with temporal variation make it difficult to predict how global change will impact native plant communities. To address this knowledge gap, we conducted a 5‐yr factorial field experiment to quantify how simulated drought, plant invasion (by cogongrass, Imperata cylindrica), and these stressors combined, affected resource availability (soil moisture and light) and competition dynamics between the invader and native longleaf pine (Pinus palustris), a foundation species in southeast U.S. forests. Drought and invasion mediated the survival and performance of pine seedlings in temporally dynamic and unexpected ways. Drought and invasion alone each significantly reduced pine seedling survival. However, when the stressors occurred together, the invader offset drought stress for pine seedlings by maintaining high levels of soil moisture, humidity, and shade compared to uninvaded vegetation. This facilitative effect was pronounced for 2 yr, yet shifted to strong competitive exclusion as the invasion progressed and the limiting resource switched from soil moisture to light. After 3 yr, pine tree survival was low except for pines growing with uninvaded vegetation under ambient precipitation conditions. After 5 yr, pines experiencing a single stressor were taller and had greater height to diameter ratios than pines under no stress or both stressors. This outcome revealed a filtering effect where poorly performing trees were culled under stressful conditions, especially when pines were growing with the invader. Together, these results demonstrate that although drought and invasion suppressed a foundation tree species, the invader temporarily moderated stressful drought conditions, and at least some trees were able to survive despite increasingly strong competition. Such unpredictable effects of interacting global change stressors on native plant species highlight the need for additional long‐term studies. 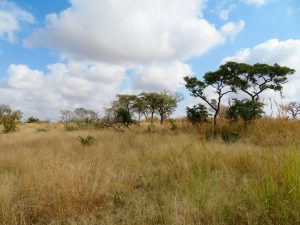 Abstract: • Rainfall variability is a major determinant of soil moisture, but its influence on vegetation structure has been challenging to generalize. This presents a major source of uncertainty in predicting vegetation responses to potentially widespread shifts in rainfall frequency and intensity. In savannas, where trees and grasses coexist, conflicting lines of evidence have suggested, variously, that tree cover can either increase or decrease in response to less frequent, more intense rainfall. • Here, we use remote sensing products and continent‐wide soil maps for sub‐Saharan Africa to analyze how soil texture and fire mediate the response of savanna tree cover to rainfall climatology. • Tree cover increased with mean wet‐season rainfall and decreased with fire frequency, consistent with previous analyses. However, responses to rainfall intensity varied: tree cover dramatically decreased with rainfall intensity on clayey soils, at high rainfall, and with rainfall spread over longer wet seasons; conversely, on sandy soils, at low rainfall, and with shorter wet seasons, tree cover instead increased with rainfall intensity. • Tree cover responses to rainfall climatology depend on soil texture, accounting for substantial variation in tree cover across African savannas. Differences in underlying soils may lead to divergent responses of savannas to global change.

Photo of the Month 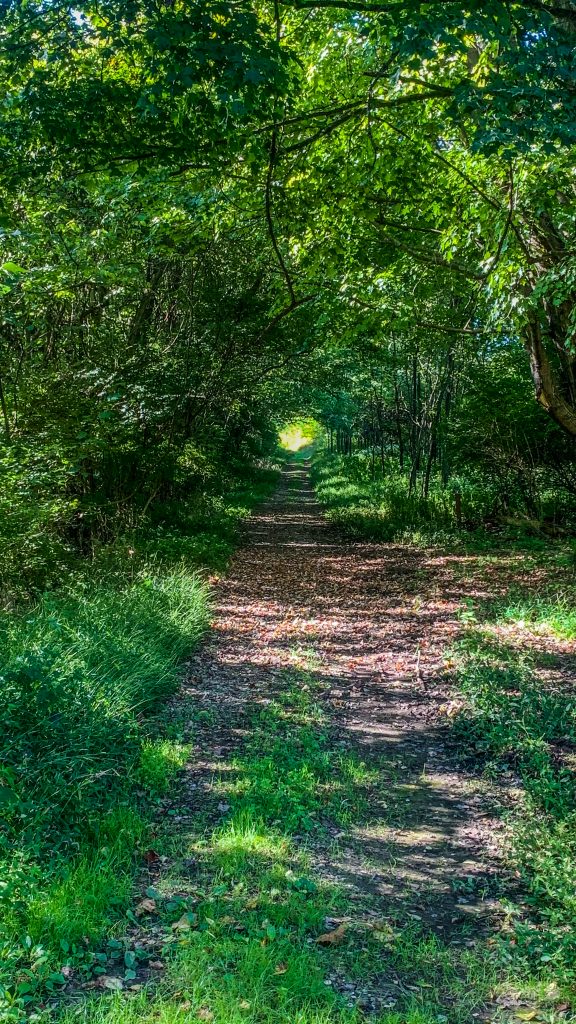 Dates, Locations, Venue and Instructions to participate in the Annual Meeting. 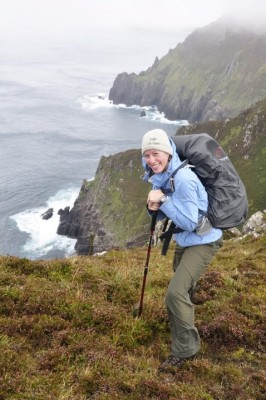 Photo of the Month Archive