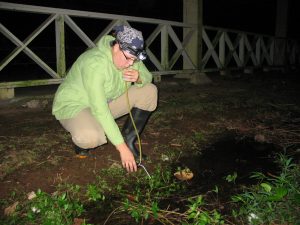 My research integrates ecology, parasitology, and ecotoxicology. My interest in both applied and fundamental ecology is reflected in my research, which highlights both anthropogenic and non-anthropogenic factors that affect community structure and species interactions, with an emphasis on aquatic communities and host-pathogen interactions. I study amphibians because they are considered the most threatened vertebrate taxon on the planet with over one third of amphibian species listed as threatened. My dissertation focuses on investigating potential causes of amphibian declines, including pesticides, host-parasite interactions and the synergy between these factors. My most recent work investigated the effects of artificial sound and light on frog biting midge distribution and feeding behavior.

Urban expansion is an increasing threat to native bird populations. Consequently, maintaining and developing safe urban habitat space is necessary for the conservation of avian species. Birds living in, or migrating through, urban areas utilize a variety of managed green-spaces such as parks, gardens, and cemeteries.  In addition to managed habitats, birds may use abandoned lots that have been reclaimed by vegetation. These urban wild lands have the potential to provide valuable resources for birds and other wildlife; however, these sites can be polluted and may impart a greater risk than benefit to the species they attract. The objective of my research is to investigate the risks and benefits associated with avian use of urban habitats, specifically in abandoned, potentially polluted, and unmanaged sites. To accomplish this objective, I investigated the trophic transfer of heavy metal contaminants and avian use of fleshy fruits at a brownfield site in Liberty State Park (LSP) in Jersey City, New Jersey. Previous research has shown that plants and birds are accumulating metals at LSP.  To quantify the trophic transfer of these metals, I collected breast feathers and fecal samples from nestling House wrens (Troglodytes aedon) in addition to invertebrate and fruit samples from both LSP and a control site, Hutcheson Memorial Forest (HMF) in Somerset NJ. All of the samples were transferred to the Environmental Toxicology lab at UMDNJ and analyzed for concentrations of As, Cd, Cr, Cu, Pb, and Zn via atomic absorption spectrometry. In order to understand if frugivores are at risk for metal consumption, I determined which species of birds feed on which species of fruit at LSP. It is well known that fruits attract birds, but little is known about the potential for metal transfer from fruits to birds. Field observations were conducted at ten individual plants from five fleshy-fruiting species totaling fifty sites, where I recorded the species and number of individual birds that visited and fed from the fruits of each plant. Results of the metal analysis show concentrations of Pb and Cd were significantly higher for all samples at LSP when compared to HMF.  At LSP, concentrations of metals were significantly higher in spiders than herbivorous invertebrates. Feather samples contained, on average, higher levels of metals than herbivorous invertebrate samples; however, avian samples had lower metal loads than spiders, which made up 32% of the nestlings’ diet.  These results suggest bird species, such as the House wrens in this study, may be tolerant of metal contamination in moderately polluted sites. Metal loads in fruit varied significantly among species. The results of our field observations of frugivory showed significant differences in fruit selection among the 25 observed visiting bird species. American Robins (Turdus migratorius), Gray Catbirds (Dumetella carolinensis), and Red-winged Blackbirds (Agelaius phoeniceus) made up over 80% of the visitations to fruiting plants. Visitation rates were strongly influenced by plant species, bird species, and the distance from the edge of the brownfield. These results suggest the potential for metal transfer from fruits to birds relies on a suite of factors and the presence of metals in fruit warrants further investigation.

Most urban ecological research has focused on sizable green spaces like parks or remnant habitats within the city, but the importance of the matrix is becoming increasingly apparent.  Previous studies indicate that yards play an important role for urban birds, and it has been suggested that groups of gardens, acting collectively, can help counteract some negative effects of urbanization.  I have taken an interdisciplinary approach (field studies, social surveys, and GIS analysis) to examine how groups of neighboring yards adjacent to forest preserves can potentially act as patches of interconnected habitat for native bird species.  I surveyed over 900 residents along 1km transects in Cook County, IL about their yard design and management practices, including the types of vegetation and “wildlife-friendly” features present in their gardens.  I also conducted bird surveys in the same study sites during Summer 2012.  For 26 transects in residential neighborhoods, we found that over 35% of yards contained bird feeders, almost 40% had bird baths or other small water features, and more than half of the residents surveyed had plants with fruits or berries in their yards.  Across all neighborhoods surveyed, we found a total of 40 bird species, with species richness ranging from 11 to 22 bird species between neighborhoods.  Our results indicate that native bird species richness in residential neighborhoods is positively linked with patches of gardens that have a high ratio of evergreens to deciduous trees and yards that contain plants with fruit or berries, although features like bird feeders are less important.  The findings from this study highlight elements of residential yards that, if extended across large swaths of the city, could potentially reduce the effective isolation of habitat fragments in the Chicago area and even add to the total habitat area of the urban ecosystem for some bird species. (Photo credit: Conservation Design Forum, Inc) 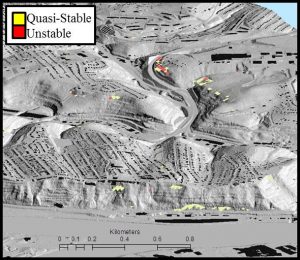 Human health and economic sustainability in urban areas are coupled to the ecosystem services provided by urban forests including air pollution reduction, storm water management, shade, and hillslope stabilization. Despite the importance of urban forests to cities, this coupling is not well understood. My research develops tools to predict the effect of ash tree loss from the urban canopy on landslide susceptibility. Emerald ash borer is predicted to kill thousands of ash trees in Pittsburgh over the next several years. A spatial model was built using the SINMAP (Stability INdex MAPping) model coupled with spatially explicit scenarios of tree loss (0%, 25%, 50%, and 75% loss of ash trees from the canopy). Ash distributions were estimated via Monte Carlo methods based on existing plot data (e.g., iTree). The research is generating several important results. Ash trees are most prevalent on slopes, likely due to human development patterns. Therefore, ash loss disproportionately increases hillslope instability. A 75% loss of ash resulted in roughly 800 new potential landslide initiation locations. Despite data limitations, the model results are robust. Sensitivity testing reveals that variations in rainfall rates, root cohesion, soil density, and friction angle produce minor changes to model results relative to the variation. The model predictions demonstrate the importance of large canopy species to urban hillslope stability, particularly on steep slopes and in areas where soils tend to retain water. These hillslopes were most likely to transition to a prediction of newly unstable following canopy loss. To improve instability predictions, better characterization of urban soils, particularly spatial patterns of compaction, and species specific root cohesion is necessary. The modeling framework developed in this research will enhance assessment of changes in landslide risk due to tree mortality, improving our ability to design healthy, economically and ecologically sustainable urban systems.