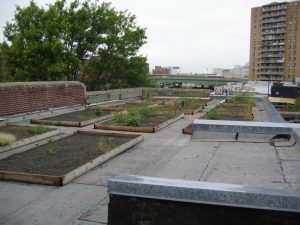 Green roofs have many benefits, including storm water management, increased biodiversity, and mitigation of the Urban Heat Island (UHI) effect. The New York metropolitan area, the largest urban area in North America, could potentially benefit from widespread installation of green roofs, but adoption requires regionally-specific information for optimization. We asked the following questions: (a) what plants will naturally colonize green roof substrate, prior to planting, and (b) how does substrate depth affect biomass and colonization? To address these questions, we compared six deep versus six shallow green roof plots on each of eight rooftops distributed across the New York City. Each plot was filled with a light-weight, low organic matter, green roof substrate lined with drainage mat but devoid of plants. The plots were left alone from May until September, when all plants were identified and above ground biomass was collected. Sixty seven of eighty five plots (~79%) were colonized by at least one plant species, and deep plots were colonized 34% more often than shallow plots. Thirty-one different plant species were identified including graminoids, woody plants and forbs across all eight rooftops. The species richness per roof ranged from 6-22 with a mean of 12.38. Of the species observed, 55% occurred on more than one rooftop, with Digitaria sanguinalis, a crabgrass, found on all rooftops. Deep plots had an average richness of 3.69 species per plot, whereas shallow plots had an average of 2.63 species per plot. The maximum above ground biomass in a plot was 630.48 g/m^2 , which is similar to the productivity of the Great Plains. Deep plots produced, on average 3x more biomass than shallow plots. This study demonstrated substrate depth affects both the number of and the biomass of green roof colonist plants. Further analysis of the physiological properties of the plants identified in this study and other plant species suitable for mid-Atlantic green roofs may provide insight into increasing ecosystem services relative to conventional roof coverings and Sedum-based green roofs.

Air currents, polluted by fossil fuel combustion in urban centers around Los Angeles, are depositing atmospheric nitrogen from the San Bernardino Mountains to the east side of Joshua Tree National Park. This pollution is altering the ways in which many unique plants and animals in different trophic levels struggle to survive across both natural and urban desert landscapes. One group of these animals are the harvester ants (Messor pergandei), which have been called ecosystem engineers because they play a critical role in nutrient cycling and energy flow, particularly in the Colorado Desert. I measured ant nest density in sites with different nitrogen deposition levels and quantified the percent carbon and nitrogen, as well as the isotopic ratios of 15N/14N and 13C/12C in soil, plant, seed, and ant samples. High N deposition sites have an average of 70 ant nests, while the medium deposition sites average 60 nests, and the low deposition sites average almost 27 nests; suggesting that increased N could be a factor in determining ant populations across the deposition gradient. High N deposition sites are also typically the most urban, indicating that urbanization at certain levels does affect ant colony density. Isotopic and C:N ratios were different among sites, but no ecological trends due to increased N were apparent.

Understanding the influence of land cover composition on the movement of plants and animals, particularly in urbanizing regions, is critical as managers strive to design ecologically connected landscapes. Urban development both alters local land-cover conditions by removing forest cover and commonly leads to a reduction in native species richness and increased dominance of nonnative, urban-adapted species. These changes in landscape and community structure, driven by urbanization, potentially alter plant-animal mutualisms and seed dispersal patterns. Oak acorns rely on a comparatively small number of animal species for dispersal. Urban development is known to influence the distribution and abundance of these species. In this study, I explore whether acorn dispersal processes (removal, predation, and dispersal) differ across sites depending on local forest cover and surrounding urban development conditions.

In 2009 and 2010, I placed experimental acorn plots in oak, conifer and open grassland habitats within urban and non-urban oak woodlands. I attached fluorescent flags to a subset of acorns to facilitate relocation of dispersed acorns. I monitored acorn removal for all acorns, and predation and dispersal for flagged acorns. Data were analyzed using mixed-effects regression models. I found significantly higher acorn removal from forest compared to open grassland plots in both years. In 2010, more acorns were removed from urban than from non-urban plots. However, of the acorns that were removed, urban acorns were significantly more likely to be eaten and moved significantly shorter distances (mean 3.6 meters, max 30 meters) than non-urban acorns (mean 9.6 meters, max 98 meters). These results suggest that landscape characteristics at fine (forest cover) and coarse (urban development) scales influence seed dispersal processes. Dispersal services in urban oak woodlands are potentially inferior to those provided in non-urban oak woodlands suggesting that urban development may significantly alter important plant-animal mutualisms. Dispersal activity was higher under forest canopy in both urban and non-urban landscapes, suggesting that maintaining forest patches in urban landscapes may facilitate acorn dispersal. 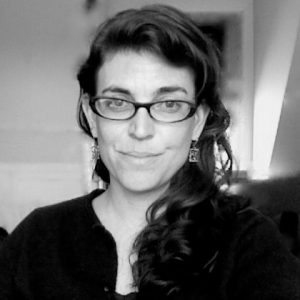 Natural areas in urban environments are important reservoirs of biodiversity that provide valuable ecological functions. However, urban environments present a unique set of stressors to natural communities, resulting in altered and degraded ecological conditions. Ecological restoration of urban forests is becoming a common environmental remedy to this problem. The altered urban environment requires different models and approaches to restoration than more pristine habitats. Understanding the effects of urban restoration practices will inform future efforts to improve the environmental health of cities. Lea Johnson’s current research evaluates the long-term fate of some of the first large-scale efforts to restore ecological integrity to forests in New York City parks. In 1992, the New York City Department of Parks and Recreation’s Natural Resources Group initiated restoration of woodlands heavily invaded by woody plants such as porcelainberry (Ampelopsis brevipedunculata) and oriental bittersweet (Celastrus orbiculatus). Restoration practices were typical of those now being used to restore woodlands across the United States: removal of invasive, non-native species by herbicide and mechanical means, followed by planting of desired native tree species. Pre-treatment and initial site conditions following restoration were recorded, and survivorship and growth of planted tree species were monitored during the two years following initial restoration. In 2009, after 17 years, Johnson revisited research plots at thirty restored sites to determine whether restoration goals had been achieved. In 2010, to provide a comparison, she sampled an additional thirty plots reported to be similarly degraded in 1992, but which were not restored. Ecological forest health data was collected to determine successional trajectories (as indicated by community composition), effects of restoration practices, the role of invasive species in restoration outcomes, and the relationship of these to site history and adjacent conditions. Preliminary results indicate that many goals of the restoration were achieved. Current analysis focuses on trends in species diversity, successional trajectories, the role of invasive species, and their relationship to post-restoration management and site conditions. These patterns are being compared with regional trends using additional data collected from long-term research plots that were neither invaded nor restored, and with species distribution change data from Brooklyn Botanic Garden’s Metropolitan Flora Project. Together, these data may improve the effectiveness of urban restoration work.