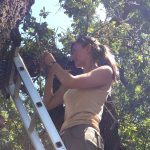 I am broadly interested in understanding how geographic context influences the effects of urbanization on ecosystem properties and processes. My graduate research in the Cadenasso Lab at UC Davis focuses on riparian ecosystems along urban streams in the metropolitan region of Sacramento, CA, where the Mediterranean climate and history of intensive agriculture have shaped the ecological changes that accompany urbanization. For the research I presented at the 2017 ESA meeting, I used historical aerial imagery to characterize changes in riparian vegetation with land conversion from agriculture to urban development, and found a dramatic increase in riparian tree canopy. This work has been published in Landscape and Urban Planning. My field research examines how altered stream channel form and increased dry-season stream flow due to urban runoff impact riparian plant communities and soils, as well as water stress in riparian trees. Ultimately, the goal of my research is to advance core concepts in urban riparian ecology so that they are applicable across a broader range of climatic settings and land use histories, and also offer better guidance for the management and restoration of urban streams and riparian zones. 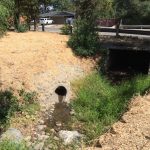 Background/Question/Methods
Urbanization is generally associated with a decrease in riparian tree canopy, but this perception has been informed by research from temperate forested biomes that may not be transferrable to other settings. For instance, in more arid environments, increased streamflow from urban runoff has been linked to riparian forest expansion. We examined changes in riparian tree canopy along headwater streams in the metropolitan area of Sacramento, California, which has a Mediterranean climate, and historically supported oak woodland or grassland vegetation with intermittent or ephemeral headwater streams. The area was also heavily impacted by agriculture before urbanization. Using aerial imagery from 1937, 1984, and 2014, we quantified changes in the area, width, and density of riparian tree canopy across the 85-square-km Arcade Creek watershed. To better understand the drivers of canopy change, we used the same aerial imagery to map land cover for the entire watershed in each time period, and examined changes in streamflow over time using data from the USGS stream gage near the mouth of the watershed. We characterized current dry-season streamflow from field observations across the watershed, and sampled the composition of riparian woody vegetation along streams throughout the network. 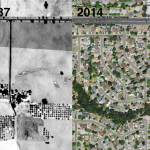 Results/Conclusions
Land cover in the Arcade Creek watershed shifted almost entirely from pasture and crops to urban development between 1937 and 2014. During that time, forested area within 50 m of streams increased by 38 percent. The total width of riparian tree canopy doubled (p < 0.0001), and the density of tree cover along the smallest streams increased substantially (p < 0.0001). We found that the Arcade Creek stream network receives dry-season streamflow subsidies from urban runoff, but these subsidies are spatially and temporally variable. While these subsidies may aid tree growth directly along stream margins, their impact is likely limited by widespread channel incision. Accordingly, we found few hydrophilic trees growing along stream banks. Instead, we found evidence of robust native oak regeneration and a high density of horticultural species. These findings suggest that the observed increase in riparian forest was primarily caused by a release from agricultural pressures after urbanization, augmented by an influx of non-native species and intentional landscape plantings, while increased dry-season streamflow played a smaller role. Our results stand in contrast to the accepted pattern of riparian forest decline with urbanization, and the increased canopy cover is expected to affect both stream and terrestrial ecological function.