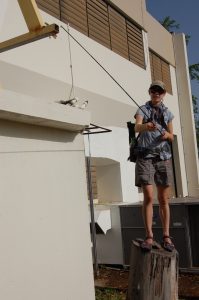 This work fits into my larger research program of understanding the ecological and evolutionary impacts of urbanization on animals, using Anolis lizards as a model system. Decades of anole research have described adaptive trait-environment relationships for behavior, morphology, and physiology in natural habitats throughout the Caribbean. Shifts in these traits in response to habitat changes have occurred over very short timescales. Additionally, many species are abundant in urban habitats although species vary in the extent to which they utilize novel anthropogenic resources. Urban habitats are drastically modified compared to forests and present novel selective pressures to species that are able to use this novel habitat space. Shifts in behavior and habitat use in urban areas set the stage for adaptive morphological and physiological shifts. My ongoing and future research aims to understand why anole species vary in their tolerance of urbanization and the role of adaptation in persistence for urban species. 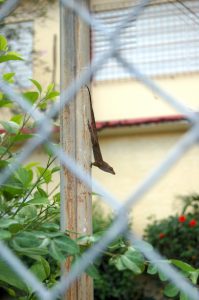 Urbanization is an important dimension of global change with significant impacts on the ecology and evolution of animals tolerant of human-altered landscapes. The drastic habitat modification and fragmentation associated with urbanization undoubtedly has negative impacts on many species, such as biotic homogenization of communities and local extirpation of urban intolerant species. However, urbanization also provides an interesting opportunity to observe adaptive responses and phenotypic shifts on contemporary timescales for species that are able to persist in this modified habitat. To this end, we investigated (1) habitat use and availability in urban habitats, and (2) phenotypic shifts associated with urban habitat use. Specifically, we measured available and utilized habitat in urban Anolis cristatellus and Anolis stratulus, two native species of lizards commonly found in urban areas across Puerto Rico. We also measured ecologically relevant morphology in A. cristatellus in paired urban and natural sites to understand adaptive responses to the novel urban environment. 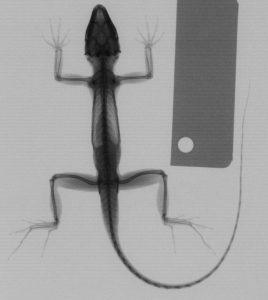 We found that A. cristatellus and A. stratulus diverged in their habitat use in urban areas. Specifically, they discriminately utilize the urban habitat based on different factors, with A. cristatellus using anthropogenic habitat, such as buildings and fences, at a high frequency and A. stratulus actively choosing patchy, natural habitat such as trees and shrubs. Urban habitat use in A. cristatellus, particularly the frequent utilization of broad and smooth anthropogenic substrates, is likely related to the phenotypic shifts we observed in performance-related traits. Namely, A. cristatellus in urban areas have longer limbs and larger toepads than conspecifics in natural habitats. Together, these results indicate that species differ in the portions of the urban habitat they utilize and that urban habitat use can lead to adaptive responses to these ecosystems. This has implications for the long-term persistence of species in urban habitats and suggests that the loss of natural habitat elements such as trees may lead to non-random species extirpations as urbanization intensifies.