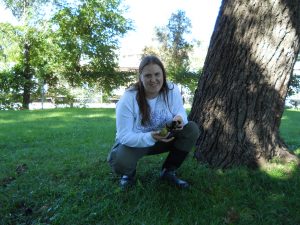 Working as a PhD student at the University of Iowa, I (Amanda Nelson) am interested in impacts on spatial distributions of specialist insects resulting from the extremes of habitat alteration created by urban and agricultural intensification in the American Midwest. At the 2014 ESA meeting, I presented preliminary results from a study investigating the impacts of landcover composition and demographic parameters on estimates of gene flow in Rhagoletis suavis, the walnut husk fly, across an urban and agricultural landscape. This research stems from a larger, multi-year landscape ecological study including several insect taxa in two separate, but closely-related, plant-herbivore-parasitoid systems. My previous results have shown that urban landcover is associated with weakened trophic interactions in the systems I am studying. My current focus is on using both landscape ecological and landscape genetic methods to shed light on the processes by which urban landcover affects the observed insect distribution patterns both spatially and temporally.

Impacts of urban versus agricultural landcover on gene flow in the walnut husk fly, Rhagoletis suavis 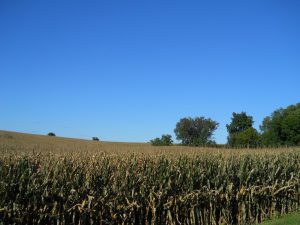 We are investigating associations between landcover and spatial population dynamics in the walnut husk fly, Rhagoletis suavis. Our study area in Southeast Iowa is a 360 km2 landscape, ~65% monoculture cropland and 25% urban/ suburban landcover. Previous landscape ecological analysis showed that, despite complete habitat occupancy across the landscape, fine grain (30 m) landcover composition explains larval population density in this herbivore at a lower effective spatial scale in urban/ suburban areas than in the rest of the landscape, with local negative spatial autocorrelation in these densities clustered on urban landcover. Fine scale landscape composition has thus been shown to impact local population densities that may in turn, along with other demographic traits (e.g. sex ratios), mitigate dispersal tendencies. We are assessing the extent to which matrix landcover composition (in 3 km radii) and local demographic traits explain patterns of genetic variation in R. suavis. We are analyzing microsatellite data for >30 R. suavis populations using 13 polymorphic loci. We are combining this genetic dataset with a larger, multi-year, landscape ecological dataset to better understand how demography and matrix characteristics may interact to impact insect distributions in human-dominated landscapes. 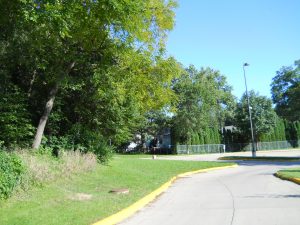 Preliminary analysis of 19 sites shows fine scale population structure in both urban and agricultural R. suavis populations, with significant differentiation detected in 165 of 171 pair-wise FST comparisons. No isolation by distance was detected; however, mean site FST values are negatively correlated with the proportion of urban landcover (r= -0.439, p= 0.030). All sites deviated significantly from Hardy-Weinberg equilibrium in > 1 locus. Recent migration estimated in BayesAss is low and from few source sites. The mean emigrant proportion found in other sites is positively correlated with surrounding wooded cover (r= 0.435, p= 0.031). Mean site inbreeding (FIS) is negatively correlated with the proportion of wooded cover (r= -0.678, p= 0.001) and positively correlated with the proportion of urban cover (r= 0.344, p= 0.046). Demographic variables were not found to be associated with genetic parameters. These results provide evidence that gene flow in walnut flies is impacted by human land-use. Specifically, our results suggest that wooded landcover promotes gene flow, while urban landcover restricts gene flow in the walnut fly. Comparison of FST versus Bayesian assignment results underline the potential importance of biological realities like inbreeding in evaluation of organismal responses to anthropogenically altered landscapes.