As a PhD student at the University of Maryland, Baltimore County, I (Michael Pennino) have been conducting research projects related to the impacts of urban infrastructure and watershed management on the sources, fluxes, and biogeochemistry of carbon and nutrients in urban streams and rivers.  For the research that I presented at the 2013 Annual ESA meeting I am studying how urban stream restoration and stormwater management practices in Baltimore, MD are able to alter sources and dampen hydrologic flashiness and pulses of carbon and nutrients.  In another project I am studying how burying streams underground in pipes in urban areas reduce nitrate retention and ecosystem metabolism.  In a third project, I am studying the relative influence of different urban and agricultural point and diffuse sources on the export of carbon and nitrogen from the Potomac River Estuary, which drains from the Washington, D.C. metropolitan area. 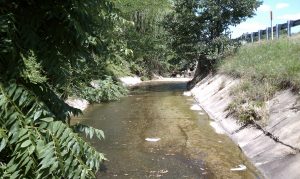 Due to the interactive effects of urbanization and climate variability, managing impacts on watershed hydrology and biogeochemical processing has become increasingly important, particularly due to the enhanced potential for eutrophication and hypoxia in downstream coastal ecosystems.  We examined whether headwater management (stream restoration and stormwater management) impacts the sources and fluxes of water, nitrogen, and carbon from urban watersheds along space and time.  We compared 4 watersheds of contrasting headwater management: 2 urban degraded watersheds and 2 managed urban watersheds with stormwater best management practices (BMPs) and stream restoration.  Surface water samples were collected biweekly at 4 USGS gauging stations located within each watershed for 2 years across baseflow and storms, and watersheds were also sampled longitudinally during 4 seasons.  Sources of water, nitrate, and carbon were investigated using isotopic and spectroscopic tracer techniques.  Annual fluxes of water, N, and C, were estimated using the USGS program LOADEST. 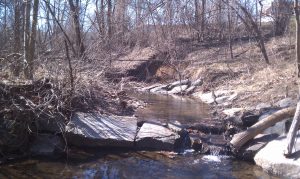 Flow duration analysis indicated that watershed management reduced pulsing of stormflow and increased baseflow runoff.  Water isotope data showed no significant differences between sources of water for the managed and degraded stream sites.  Elevated levels of indicator anions (F–, Cl–, I–, SO42-) as well as greater “pulses” of C and N over time in the degraded vs. managed watersheds indicate potential sewage sources due to leaky sanitary sewers and greater stormdrain inputs.  Nitrate isotope data also showed that degraded streams have significantly greater nitrate (p < 0.05) from atmospheric and potential sewage sources.  Based on spectral carbon quality indices, degraded sites were found to have significantly (p < 0.05) more labile/aquatic sourced, and less terrestrial organic matter than managed streams.  The degraded watersheds consistently showed highly variable, and more “pulsed” fluxes for N and C and indicator anions than the managed watersheds.  While the managed watersheds showed lower total annual export for C, the annual N exports were not consistently lower than the degraded watersheds.  However, most of the C and N was exported during higher flows in the degraded watersheds, while most nutrient export for managed watersheds was during baseflow.  Overall, the source tracking data indicate that most nitrogen and carbon originates from near stream sources, which, when unmanaged, may contribute disproportionately to watershed fluxes, particularly during extreme hydrologic events.  Our results also suggest that watershed management strategies have the potential to dampen pulses of streamflow, sources, and reduce fluxes of carbon and nitrogen in urbanizing watersheds experiencing climate variability. 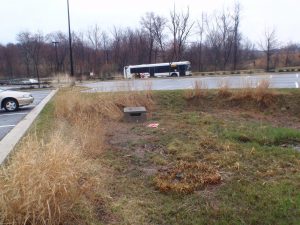