For the first time, scientists catch on camera a tiny marsupial climbing higher than previously thought in the forest canopy 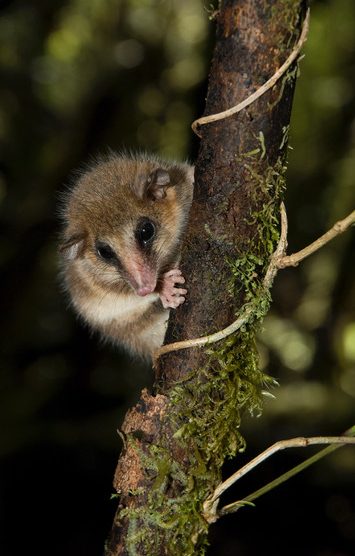 A monito del monte peers down from a tree. This marsupial has a prehensile tail that aids in climbing and eats mostly insects, fruit, and seeds. Females can carry up to five of their young in a well-developed pouch. Photo courtesy of Andres Charrier.

In the Andean forests along the border of Chile and Argentina, there have long been speculations that the mouse-sized marsupial monito del monte (Dromiciops gliroides) climbs to lofty heights in the trees. Yet, due to the lack of knowledge about the region’s biodiversity in the forest canopies, no previous records exist documenting such arboreal habits for this creature.

Some tree-climbing researchers are changing that.

Javier Godoy-Güinao and colleagues set motion-sensing camera traps in the tree canopy to capture photographic evidence confirming the high-climbing theories surrounding this miniature mammal. The findings are published today in a new study in the Ecological Society of America’s journal Ecosphere.

The monito del monte (Spanish for “little monkey of the bush,” although not a monkey at all) is a small, inarguably cute marsupial that is found solely in the temperate rainforests of Argentina and Chile. It eats mostly insects with some fruit and seeds and nuts, and it also hibernates, which is unusual for marsupials. Females can carry up to five young in a pouch, and a prehensile tail makes it adept at climbing. It is listed as “Near Threatened” by the International Union for Conservation of Nature.

Researchers thought this marsupial may live in the canopy because of its mobility in the vegetation above the forest floor, called the understory. “However,” Godoy-Güinao writes, “all previous studies on D. gliroides have been conducted from the ground, with no documentation of this species’ ability to climb trees, or how high they may reach.” Following the clues from reported sightings, he and his colleagues found the mystery intriguing and decided it worth finding out first hand just how high they climb.

Along with Ivan Díaz, professor in charge of the Laboratory of Canopy Ecology and Biodiversity (CanopyLab) of the Universidad Austral de Chile, and Juan Luis Celis-Diez, professor at P. Universidad Católica de Valparaíso, Godoy-Güinao began studies in 2017 in Bosque Pehuén Park. The park is a protected area owned by the Mar Adentro Foundation, a non-profit dedicated to promoting conservation of and education on biodiversity, and to cultural development in the region.

Researchers climbed high (12-21 m) into the treetops to install the camera traps and patiently waited to capture images of this elusive marsupial. After months of waiting and collecting data, the tiny creatures appeared within the highest camera trap’s view, and it snapped hundreds of photos. 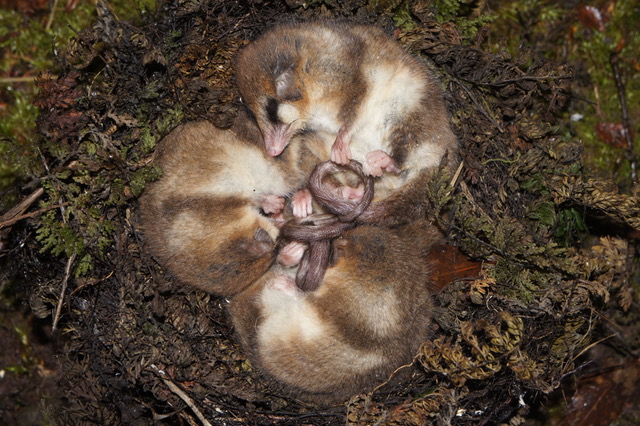 A group of monitos in a nest. Photo courtesy of Andres Charrier.

Armed with proof that it is a frequent climber to the highest point of the tallest trees, Godoy-Güinao argues that the role of the monito del monte in the canopy is much more relevant to the biodiversity of the ecosystem than originally thought.

One of its large role lies in seed germination and dispersal. In the treetops of Chilean forests, previous studies by the CanopyLab showed a great variety of air plants such as orchids, bromeliads, lichens, mosses, and ferns that grow within the trees. The monito del monte is a seed disperser of most of these plants; it eats wild fruits and swallows the seeds whole, which then pass through its digestive track and are ready to germinate upon excretion. Given the frequency with which the species visits these high places, it could be the main sower of the plants that make up this vertical garden. Additionally, it is an avid consumer of the insects that attack the foliage of these trees.

Godoy-Güinao hopes that continued study will shed light on the importance of the monito del monte in the treetops, as well learn more about the species. For now, he says, “this evidence suggests that [it] is perhaps the main or only mammal of the region that ventures into the heights of trees, and it can have a very influential role in the biodiversity of the southern South American temperate rainforests.”