ESA sponsors or co-sponsors congressional briefings in which ESA members and other experts inform congressional staff on the science behind issues of importance to lawmakers, such as biofuels, wildfires, invasive species, and climate change. Recent briefings include: 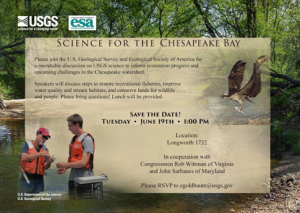 It is the largest of more than 100 estuaries in the United States (U.S.) and third largest in the world. The Chesapeake Bay watershed stretches approximately 524 miles from Cooperstown, New York, to Norfolk, Virginia. It includes parts of six states—Delaware, Maryland, New York, Pennsylvania, Virginia and West Virginia—and the entire District of Columbia. It is the first estuary in the nation to be targeted for restoration as an integrated watershed and ecosystem.

Numerous stakeholders at the local, state, and federal level use USGS science to inform management decisions. The Environmental Protection Agency, National Park Service, and NOAA are other key federal partners working with the USGS in the Chesapeake Bay.  The science and long-term datasets collected by all the agencies also inform management of other estuaries internationally and within the U.S. such as in the San Francisco Bay. Science is showing that improved water quality provides many co-benefits.

The speakers explained to the Hill staff that the Chesapeake Bay is a globally important ecological and economic resource. The Bay is home to iconic species like the blue crab, over 350 fish species and hundreds of species of waterbirds. Recreational and commercial fisheries in the Chesapeake generate $3.1 billion in economic value a year and outdoor recreation in the area generates $20 billion a year. While the Chesapeake Bay is currently experiencing a record recovery – blue crab populations are currently at an all-time high and the number of acres of submerged aquatic vegetation has surpassed 100,000 for the first time in decades — the ecosystem is still threatened by development, sea level rise, and invasive species such as the blue and flathead catfish that have rapidly expanded into nearly every major tributary of the Bay.

USGS science is creating solutions to improve the Chesapeake Bay ecosystem and mitigate human impacts on the ecosystem. For example, USGS research looks at how to make fish ladders effective for individual fish species to allow more fish to migrate upstream to spawn. Another project works to improve wastewater treatment plants to reduce wastewater discharge. USGS’ Fish Health Laboratory helps managers understand and identify fish diseases and has developed an early warning system for disease outbreaks. The agency, along with state and local partners, collects water quality data from across the region. USGS then analyzes this data and creates water quality analyses models and tools.

Many of the tools, models and applications developed by USGS for the Chesapeake Bay ecosystem are also applicable and useful for other estuaries. Looking at the long-term data sets provides a solid basis to inform planning for the future. USGS scientists working in the Chesapeake Bay watershed are coordinating with counterparts in the San Francisco Bay and the Delaware Bay to ensure that their methodologies are consistent. 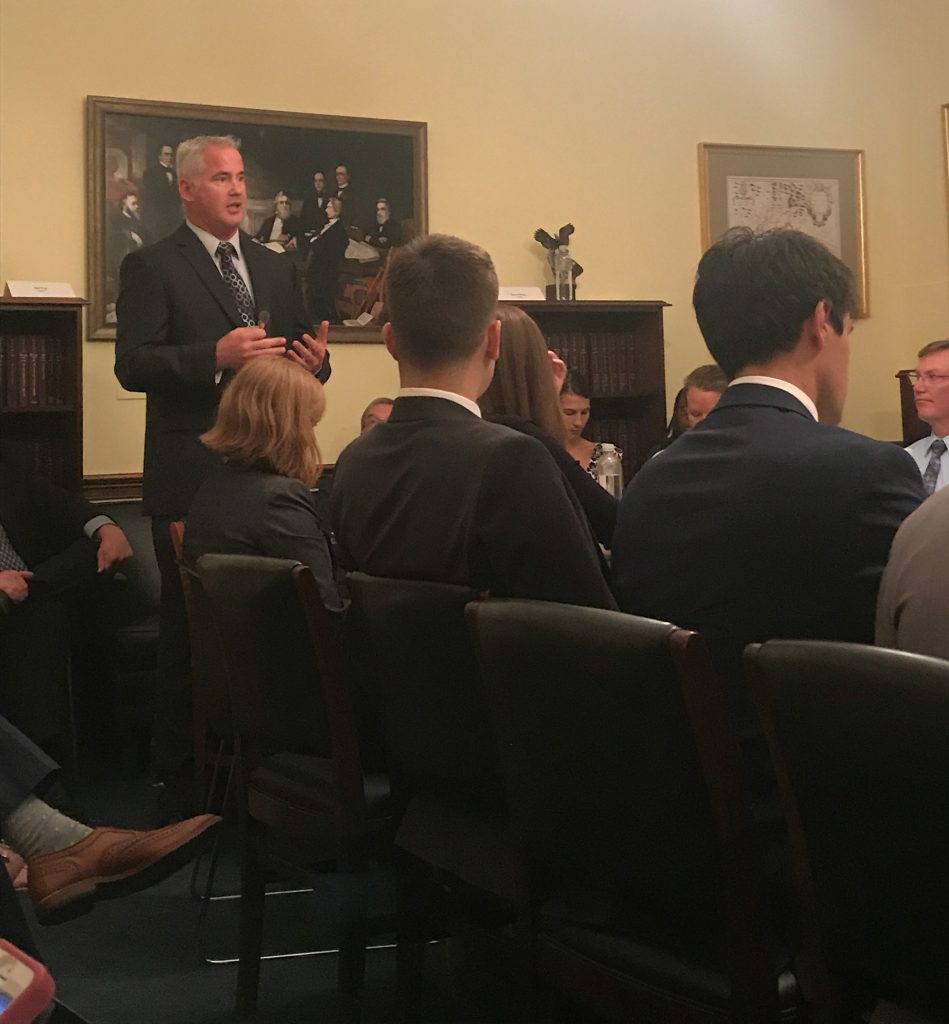 Marel King, Pennsylvania director for the Chesapeake Bay Commission and James Davis-Martin (pictured above), Chesapeake Bay coordinator for the Virginia Department of Environmental Quality also joined the panel to provide perspective on USGS science from the manager’s perspective. Both said that their jobs and their organization’s missions would be impossible to do without USGS science. Long-term data from USGS helps these organizations understand trends over time and make decisions. USGS expertise helps them respond to changing conditions and unexpected phenomena. As Davis-Martin said, “Good science is foundational to good management.” 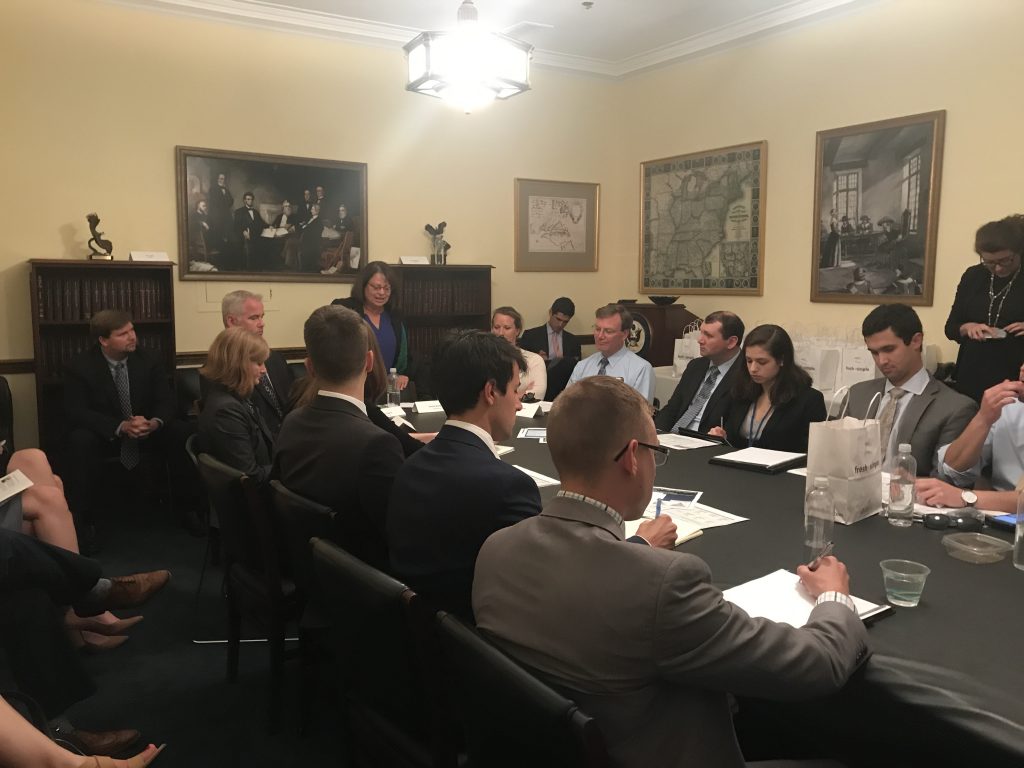 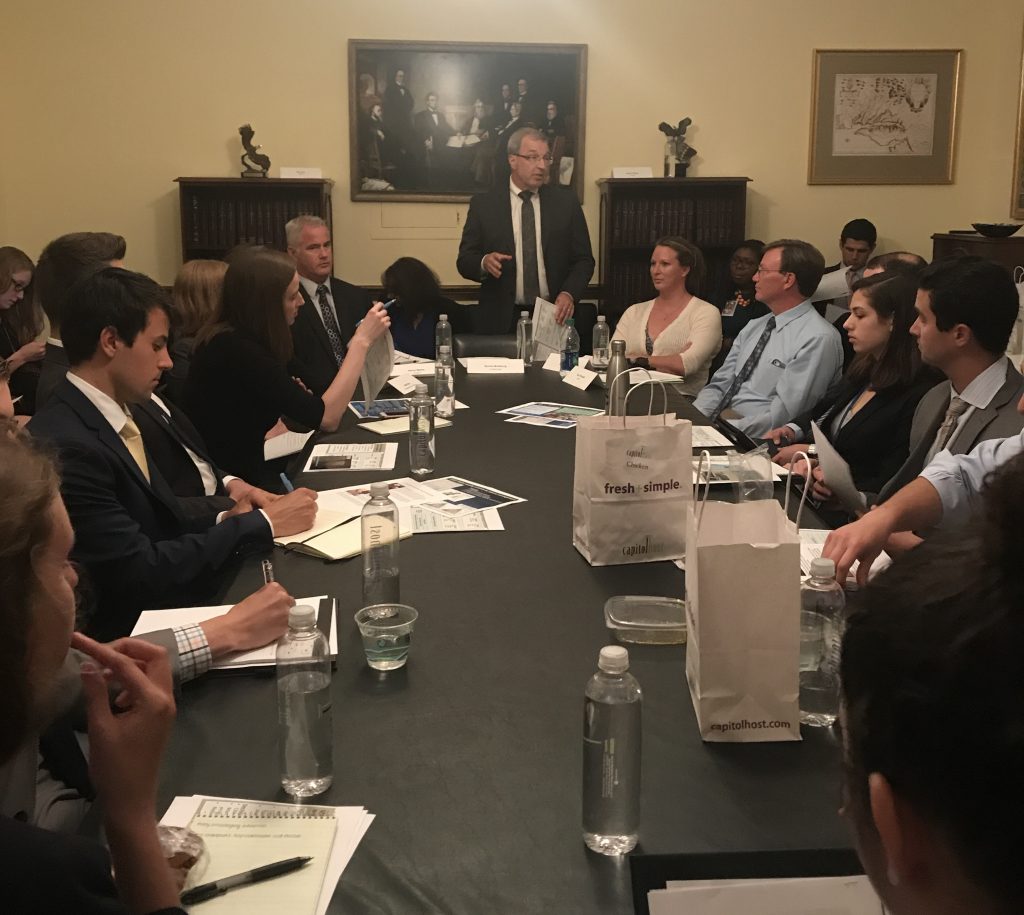 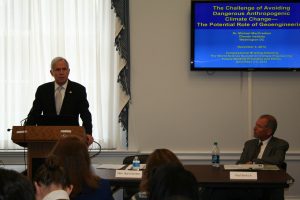 The Honorable Bart Gordon of Tennessee, former House Science and Technology Committee Chairman, served in the US House of Representatives for 26 years. He served as Chairman of the House Committee on Science and Technology from 2007 to 2010. In 2007, Chairman Gordon sponsored the America COMPETES Act, signed into law by President Bush, which promotes federal investments in research and innovation in order to make the US more globally competitive. In 2010, he sponsored and secured passage of the America COMPETES Reauthorization Act. Signed by President Obama, the act renewed federal commitment to scientific research and education, which included a new provision supporting prize competitions to further incentivize innovation. During his tenure as Science and Technology Committee Chairman, he held a committee hearing on climate engineering, “Engineering the Climate: Research Needs and Strategies for International Coordination.” (moc.setaglknull@nodrog.trab)

Paul M. Bertsch is Deputy Director of Australia’s national science agency Commonwealth Scientific and Industrial Research Organisation (CSIRO) Land and Water Flagship, which provides the science to underpin Australia’s economic, social and environmental prosperity through stewardship of land and water resources ecosystems, and urban areas. He is aso Professor of Environmental Chemistry and Toxicology, and Director of the Tracy Farmer Institute for Sustainability and the Environment at the University of Kentucky and is Georgia Power Professor Emeritus of Soil and Environmental Chemistry at the University of Georgia and an Adjunct Professor of Environmental Systems Engineering and Science at Clemson University.

Michael MacCracken has been the Chief Scientist for Climate Change Programs with the Climate Institute in Washington DC since his retirement from the University of California in October 2002. His current research interests include human-induced climate change and consequent impacts, climate engineering, and the beneficial effects of limiting emissions of non-CO2 greenhouse gases. From 1968-93 he led studies at the Lawrence Livermore National Laboratory using computer models to evaluate the climatic effects of volcanic aerosols, land-cover change, nuclear war, and the increasing CO2 concentration. From 1993-97, he served as the first executive director of the interagency Office of the US Global Change Research Program and then from 1997-2001 as executive director of the National Assessment Coordination Office for the first national U.S climate impacts assessment. He also previously served as president of the International Association of Meteorology and Atmospheric Sciences (2003-07) and as an integration team member for the Arctic Climate Impact Assessment (2002-04). His legal declaration on standing based on the impacts of climate change on the United States was cited favorably by Justice Stevens in his majority opinion in the April 2007 landmark U.S. Supreme Court decision of Massachusetts et al. versus the Environmental Protection Agency that has allowed EPA to start regulating greenhouse gas emissions. (gro.etamilcnull@nekcarccamm)

The Ecology of Zoonotic Diseases

On April 23, 2013, the Ecological Society of America sponsored a congressional briefing on the ecology of zoonotic diseases. The briefing highlighted the various environmental factors that can contribute to the spread of several prominent animal to human diseases.Presentations were given by Robert Parmenter, Director of the USDA Valles Caldera National Reserve Scientific Services Division and Gregory Glass, Professor at Johns Hopkins School of Public Health and Director of the Alabama Southern Research Institute’s Global Biological Threat Reduction Program. Diseases discussed in Parmenter’s presentation included malaria, Lyme disease and hantavirus, a rodent transmitted disease, which has gained prominence in the New Mexico region where he resides. Parmenter explained that some diseases require vectors (usually arthropods like ticks or fleas) while others can be directly transmitted from a host (like the rodent-human spread of hantavirus). He also elaborated on the various ecological conditions that influence zoonotic diseases, such as precipitation and temperature.

Glass talked about the sources of environmental and health data. Multiple federal agencies make detection, monitoring and research of zoonotic diseases possible.  These include the National Aeronautics Space Administration, the National Oceanic and Atmospheric Administration, the United States Geological Survey, the Centers for Disease Control, the Environmental Protection Agency, the Departments of Defense, Agriculture and Homeland Security and the US Agency for International Development. Glass also highlighted ways in which ecologists can help predict future zoonotic disease outbreaks and how climate change is likely to affect the distribution of Lyme disease.

The briefing was hosted by the House Science, Space and Technology Committee.

Emily Stanley’s presentation focused on the work of rivers and the function of floodplains.  Industry, transportation, and recreation all constitute work done by rivers.  Less well known and valued is the work done by floodplains, responsible for such desirable services such as flood attenuation, fish production, improved water quality and groundwater recharge.  Stanley noted that aging US levee and other infrastructure provide an opportunity to move beyond structural flood control and take greater advantage of the functions of floodplains. 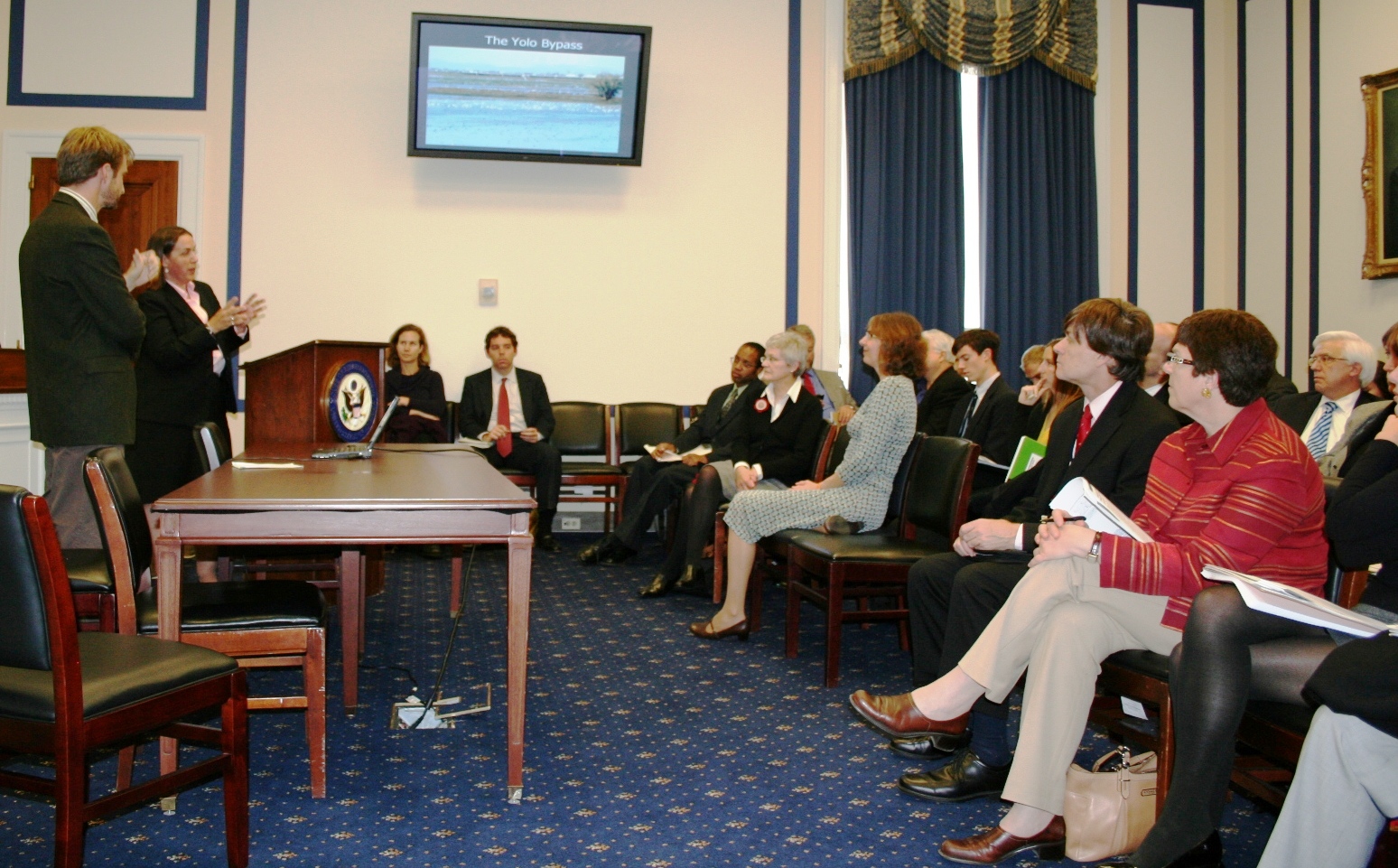 Jeff Opperman’s presentation focused on the logic of managing rivers as a system and for multiple benefits. These include risk reduction for people and infrastructure as well as benefits such as water storage during droughts and increased fisheries production.   Opperman said that because the Mississippi River is managed as a comprehensive system, the recent flood was far less damaging than that of 1927 even though a greater volume of water passed through the system in 2011.  Opperman also pointed to the success story of California’s Yolo Bypass, which has reduced flood risk while increasing goods and services.

To view the complete presentations, please click on the links below:

ESA co-sponsored a congressional briefing that provided a scientific perspective on options for adapting to climate change in the United States.

Water Resources in the West: Assessing Tradeoffs in a Changing Climate

The ecological scientists provided information on the current status and future outlook for freshwater resources in the American West, where the impacts of climate change and agricultural and urban demand are most pronounced. Sharing insights from their work in urban, agricultural, and natural ecosystems, they discussed the implications of water management and conservation strategies, with an emphasis on the tradeoffs inherent to water allocation decisions. 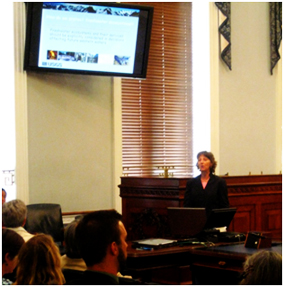 Dr. Baron explained the drivers behind western water shortages, described the possible negative impacts of these shortages on natural freshwater ecosystems, and discussed how such impacts might be lessened through adaptive ecosystem management.

d how water allocation decisions impact the availability of ecosystem resources and how ecological research can assist in decision-making .

The two briefings drew more than 100 attendees in total, including congressional staff and researchers, federal agency representatives, and members of the scientific community.

Scarce Western Water is About to Get Scarcer: What are the Implications for Freshwater Ecosystems
Dr. Jill Baron, US Geological Survey, Colorado State University

Click here to view the summary handout from the briefing. 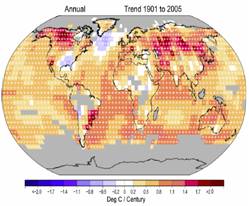 ESA co-sponsored a congressional briefing to address the scientific and public policy-related aspects of climate change.

From Agricultural to Urban Ecosystems: Nature's Services to Humankind

From Agricultural to Urban Ecosystems: Nature’s Services to Humankind 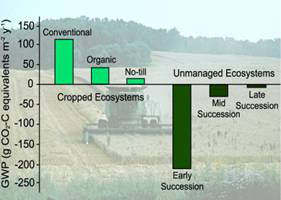 ESA co-sponsored a webinar on ecosystem services featuring presentations from both ecologists and economists:
Featured speakers:

After the Fire: Approaches to Revitalizing Ecosystem Resources

After the Fire: Approaches to Revitalizing Ecosystem Resources 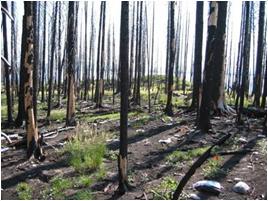 The Sustainability of Cellulosic Biofuels 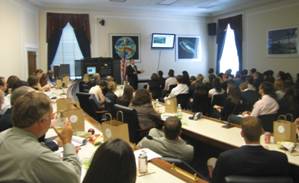 The Sustainability of Cellulosic Biofuels June 11, 2008

ESA hosted a congressional briefing on the ecological and economic impacts of producing biofuels from cellulosic sources—the leaves, stems, and other fibrous parts of plants.
Featured speakers:

Farmers’ choice of livestock species is a key management decision that affects grassland vegetation structure and associated biodiversity values. Agricultural lands may be better managed for both biodiversity and ecosystem services when analyzed as a “farming system”, or a collection of similarly managed farms – such as those that work with domestic sheep in Portugal. In the April issue of Frontiers, Santos et al. describe how the adoption of such a holistic approach may facilitate conducting applied ecological research and comparing the environmental impacts of various agricultural policies.