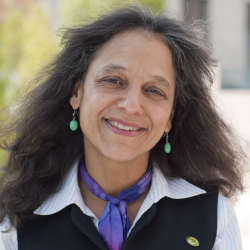 Dr. Nalini Nadkarni is a forest ecologist and professor of biology at the University of Utah in Salt Lake City. Her research interests focus on the community and ecosystem ecology of rain forests, the ecological effects of forest loss and fragmentation, and enhancing conservation through interdisciplinary collaboration. Her research is supported by the National Science Foundation, The National Geographic Society, and the Mellon Foundation. Much of Dr. Nadkarni’s current work is based out of her field sites in Monteverde, Costa Rica, and on the Olympic Peninsula of Washington State.

One of Dr. Nadkarni’s primary focuses outside of her ecological research is on increasing diversity and representation in science. In 2019, she collaborated with National Geographic and Mattel to develop a line of Barbie dolls aimed at making science more interesting, accessible, and interactive for young children. She was first inspired to create the dolls after recognizing the potential for play to shape young people’s perceptions of science careers. Particularly, she saw the potential for Barbie to help encourage girls to be interested in science. Nearly a decade before her partnership with Mattel, Dr. Nadkarni and her students had begun to recycle old Barbie Dolls by outfitting them with outdoor gear and scientific instruments to create their own canopy ecology Barbies. After being recognized for her creative endeavors, she worked to help develop a new set of dolls featuring women in the natural sciences, including astrophysicist, wildlife biologist, nature photographer, and entomologist Barbies that are now included in Mattel’s lineup of Explorer Dolls.

In addition to her many scientific and social contributions to the study of ecology, Dr. Nadkarni is at the forefront of public engagement in her field. Much of her work focuses on bridging the gaps of scientific knowledge and engaging nonscientists in science learning. She is especially interested in understanding and overcoming obstacles that scientists face in disseminating research to audiences outside of their fields. In 1994, she helped to found the International Canopy Network, a non-profit organization that encourages communication between professionals engaged in forest ecology. Her goal is to raise awareness about science in order to inspire others to care about the future of the earth, and ultimately to foster meaningful positive relationships between humans and the environment.

In addition to her professional work, Nalini is a supporter of SEEDS and has served ESA as Vice President for Education and Human Resources, and participates in the Human Ecology, Education, and Long-term Studies Sections.