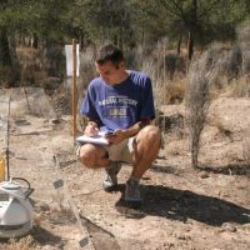 Dr. Fernando Maestre received his BsC and PhD in biology from the University of Alicante (Spain) in 1998 and 2002, respectively. He then did a postdoc at Duke University and moved in 2005 to Rey Juan Carlos University (Spain), and became a professor of ecology. In May of 2019, he joined the University of Alicante. Dr. Maestra is a distinguished researcher and leads the Dryland Ecology and Global Change Lab. This year, he is an ESA Fellow.

Fernando has completed research that has led to numerous relevant advances on the study of dryland ecosystems and their responses to ongoing climate change, desertification and the relationship between biodiversity and ecosystem functioning, and other important environmental topics.

A highlight of his career has been the leading of the BIOCOM and BIODESERT surveys, the first global networks devoted to study the impacts of climate change and desertification in drylands worldwide. These networks involve the survey of more than 550 dryland ecosystems from more than 30 countries from six continents using a standardized protocol, and the coordination of more than 150 researchers from all continents (except Antarctica). These global surveys are providing key insights on the ecology and responses to climate change of drylands, which cover ~41% of terrestrial surface and are home of ~40% of the global population. These include the first reported empirical evidence of a positive relationship between both plant species richness and the diversity of soil bacteria and fungi and ecosystem functioning in terrestrial ecosystems at the global scale (Science 335: 214-218, 2012; Nature Commun 7: 10541, 2016), and of the negative impacts of increases in aridity such as those forecasted due to climate change on the diversity of soil bacteria and fungi (PNAS 112: 15684â€“15689, 2015) and on soil stoichiometry (Nature 502: 672-676, 2013) in global drylands.

Fernando has been a member of the Microbial Ecology Section and the Early Career Ecologist Section. When asked about his favorite part about ESA, he replied, “In addition to having access to important resources for my research and teaching, such as journals, I really like being part of a global community of ecologists working to advance our understanding of the natural world we are part of. I also value the (and like to contribute to) important role ESA plays in advancing the science of ecology and advocating for its importance to contribute solving some of the most pressing issues our societies are facing.”