The Invasion Ecology Section, along with Biological Invasions and Springer International Publishers, is pleased to sponsor the annual Simberloff Award for Outstanding Presentation. The award’s name is in recognition of the contributions of the Editor-in-Chief of Biological Invasions, Daniel Simberloff, to the study of nonnative species. The award will be given to two student presenters at ESA’s annual meeting who embody Simberloff’s creativity, intelligence, and passion for studying and understanding the biology of nonnative organisms. Entrants are judged on the rigor, creativity, importance, and quality of their research and its presentation. Each winner will receive a $250 cash award and will have their achievements published in Biological Invasions.

To learn more about this award and its namesake, see the following publication in Biological Invasions: 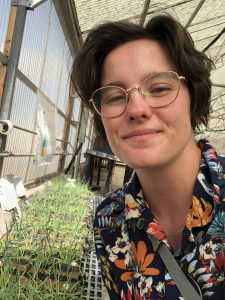 Kay is a fourth-year Ph.D. student in Fire and Dryland Ecosystems lab in the University of Nevada, Reno. Their research investigates how drought interacts with grass invasion and wildfire to influence nutrient cycling and retention in drylands. In their winning poster, Kay found an interesting belowground feedback mechanism in invasive cheatgrass,  in which root exudation increases nitrogen (N) availability by suppressing heterotrophic microbes (See poster below).

Kay’s favorite Simberloff publication is Dr. Simberloff’s dissertation research (Simberloff and Wilson 1969, Simberloff 1969) as they find it inspiring because it speaks to his qualities as a creative and critical thinker. His inventive approach to research design and commitment to challenging and strengthening our understanding of ecology has led to impactful and innovative research over the course of his career. 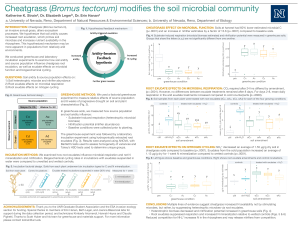 oral presentation
Evolution in response to management and propagule size interact to increase invasiveness among experimental populations of aquatic plants
Taylor is a Ph.D. candidate in Turcotte’s Lab, U. of Pittsburgh, interested in better understanding the relative contributions of ecological versus evolutionary factors (as well as their interactions) in determining invasion success and failure, using duckweed as a model species. Here is the summary of his work:
Invasive populations often require intense management to reduce their ecological impact on invaded communities and ecosystems. Whether these removal efforts influence the invasive population’s evolution and, subsequently, its invasiveness remains to be thoroughly and empirically investigated. To address this gap, I conducted an experiment evolving genetically diverse populations of the duckweed Lemna minor to the presence or absence of repeated reductions in population size (simulating management) before introducing them to diverse communities of other duckweed species in replicated, experimental invasions. I was able to compare the invasiveness of these populations to populations that had evolved in the absence of management and populations of duckweed lacking any experimental evolutionary history.
Populations evolving to management were significantly more invasive than their non-managed and non-evolved counterparts. This was especially the case at the highest propagule sizes where managed populations demonstrated an average increase of population growth and biomass of 44% relative to populations evolving under non-management conditions. Preliminary analyses show that managed populations were also significantly more impactful in their ability to reduce community growth rates. These results seem to demonstrate that the longterm eco-evolutionary consequences of certain management practices can be complicated and potentially detrimental towards ultimate conservation goals.

Taylor’s favorite Simberloff paper is Simberloff & Von Holle 1999.” This paper and the concept of invasional meltdowns provided the framework for my very first experience conducting research as an undergraduate student at St. John’s University in central Minnesota. We measured the potential synergistic effects of invasive understory shrubs and earthworms in deciduous forests. This paper, and the experience that accompanied it, made me curious about the multitude of factors that influence invasions and sent me on a journey that I continue to pursue to this day!”

Angela is a Ph.D. candidate interested in how polyploidy influences plant responses to the biotic and abiotic environment. In her talk, she presented research testing the hypothesis of higher phenotypic plasticity in successful invasive species, using goldenrod (Solidago gigantea, Asteraceae) as a model. In a thorough experiment,  morphological and physiological traits of native and invasive goldenrod were contrasted, finding that native goldenrod has more phenotypic plasticity in biomass accumulation and height than invasive goldenrod. Other traits didn’t show phenotypic plasticity differences between treatments. Additional studies were required for defensive traits. Research like this is very relevant as it is one of the few studies controlling for the potential effects that polyploidy might have on PP by comparing only native and invasive populations of the same ploidy level. Well done Angela!

What Simberloff publication is most inspiring to you and why?
Genovesi, P. and Simberloff D. (2020). “De-extinction” in conservation: Assessing risks of releasing“ resurrected” species. Journal for Nature Conservation. 56:125838. I was introduced to the topic of “de-extinction” in a Conservation Biology class, and since then I have found its proposal as an innovative conservation tool to be both fascinating and concerning. In this paper, Genovesi and Simberloff clearly discuss the risks and potential benefits of introducing extinct species proxies into modern ecosystems through the lens of invasive biology. I personally like this publication because its incorporation of conservation biology, policy making, and public opinion makes for a fantastic springboard into complex ecological discussions. For that reason, I feel that this publication is a strong learning tool that can enhance classroom discussions and students’ understanding of ecology and biology. 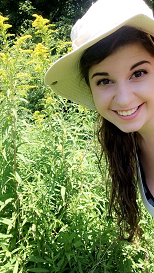 Will is a PhD. Candidate at the Spatial Ecology Lab, UMass Amherst. He is interested in analyzing big data with spatial and statistical techniques to study global trends in plant invasions. For ESA 2021 he presented brilliantly how biogeographic data could be incorporated to risk assessments of invasive plants. To achieve this, a large dataset of biogeographic traits (characteristics of native plant habitat) was compiled for 5500 vascular plants native to the continental United States and each species are given an invasion status. Authors hypothesized that species with broader abiotic niches in the native habitat and species more accessible to human discovery (e.g., proximal to human footprint) would be more likely to establish and invade outside of the U.S.  This seems to be the case for the US continental flora, as species that can tolerate a wider range of temperature, precipitation, soil pH, and soil texture were correctly predicted as invasive elsewhere. Thus niche breadth can be a valuable trait to incorporate into risk assessments and the variables described above can be easily obtained from current species occurrences repositories such as GBIF.

What Simberloff publication is most inspiring to you and why?
This is a tough choice, but I’d have to say “Ecological Resistance To Biological Invasion Overwhelmed By Propagule Pressure” by Von Holle and Simberloff (2005). I’m currently working on a project that evaluates the different pathways used by invasive plants to relocate to new environments, so these days I’m thinking a lot about propagule pressure, how it interacts with other variables, and the role it plays in the different phases of the invasion process. This publication clearly conveys the importance of propagule pressure in determining invisibility, and in doing so inspires me to better understand these underlying processes and help create more effective invasive plant management strategies in the future.

Congratulations to our 2020 winners Rebecca Mostow and Eve Beaury! 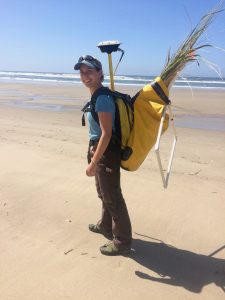 What is your year of study at your university? What lab do you belong to?

I am a 5th year PhD candidate working with Dr. Sally Hacker at Oregon State University.

What is your over-arching research topic?

I study the ecology and population genetics of two invasive, closely-related, dune-building beachgrasses. These two grasses densely invaded the US Pacific Coast leading to habitat loss for native flora and fauna but also dramatically increasing the coastal protection provided by dunes to nearby towns and cities. The discovery of a novel hybrid between the two species (as described in my ESA talk) has pushed me to complete a truly interdisciplinary PhD, integrating genomic tools with models and theory from invasion ecology.

What Simberloff publication is most inspiring to you and why?

Although it is hard to pick just one Simberloff paper, I think I have to go with Rhymer and Simberloff (1996). I became fascinated with invasive plants during a year working on plant conservation in the Great Basin. Every day I saw the immense ecological consequences of biological invasions and decided to go to grad school to study evolution in invasive plants, hoping to understand how these organisms were able to thrive in environments in which they did not originally evolve. This paper opened my eyes to the potential impact of hybridization, introgression, and gene flow between the species in my study system and helped me to understand the potential implications of our recent discovery. Additionally, as someone interested in science communication, I have always admired the clear, thorough, and well-reasoned style with which Dr. Simberloff always writes, this being no exception. 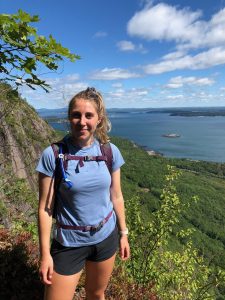 What is your year of study at your university? What lab do you belong to?

I am beginning my fourth year of my PhD in Organismic and Evolutionary Biology at the University of Massachusetts Amherst. I am part of Dr. Bethany Bradley’s spatial ecology lab.

What is your over-arching research topic?

I study the macroecology and biogeography of invasive plant presence, abundance, and impact. I’m particularly interested in research that intersects invasive species’ ecology, policy, and management, as well as interactions between invasive species and global change.

What Simberloff publication is most inspiring to you and why?

It is hard to choose just one, but I’m currently most inspired by Simberloff et al. (2005). This study reviews major issues in invasive species research, policy, and management, as well as advocates for why these three domains need to be better integrated. I am inspired by this review because I am most passionate about projects that connect science to real-world problems. Although published 15 years ago, Simberloff et al. 2005 highlights a disconnect between research and implementation that is still prevalent today and which is exemplified by the work on ornamental invasive plants that I presented at ESA. This publication, and many others by Simberloff, motivates me to work on projects that impact the way we study and manage invasions in the United States.

To learn more about the 2020 winners, see Biological Invasions.

To learn more about the 2019 winners, see the following publication in Biological Invasions:

To learn more about the 2018 winners, see the following publication in Biological Invasions: