In 1982, these twelve ESA presidents and past-presidents gathered at the annual meeting for a photo. They represent 32 years of ESA history, from 1951 to 1981, but quite a few are missing. The earliest president in attendance for this photo is Samuel Charles Kendeigh, who served in 1951, immediately following ESA’s first female president, E. Lucy Braun, who was not present for the photo.

This photo was contributed by Art Cooper, who recalls that the photo “was taken at the ESA Annual Meeting in State College PA in 1982 shortly after I had finished delivering my presidential address— that accounts for the “thank god it’s over” look on my face. The persons in the picture were, I believe, all the ex-presidents (and Likens as president-elect) present at the dinner where the talk was given.”

In November 1988 President Hal Mooney appointed the Ad Hoc Committee on Woman and Minorities with the charge “to enhance the participation of women and minorities in the discipline of ecology, to investigate barriers to participation by women and minorities in professional life and to recommend actions to overcome or remove these barriers.” The committee had its first meeting at the August 1989 ESA annual meeting in Toronto, Canada.
The presidents were again assembled in 1990, on the occasion of ESA’s 75th anniversary. This time, Art Hassler was the earliest one in attendance; he served in 1961. ESA has a three-year election system, with presidents serving first as “President-Elect,” then as “President” and finally as “Past President.” This explains the inclusion of ESA’s fourth female president, Jane Lubchenco, whose term as president began in 1992. After a 35-year gap, ESA’s second female president, Jean Langenheim, served in 1986 and was immediately followed by Margaret Davis (1987). For this time period, 1961 to 1992, ESA’s three female presidents made up almost 16% of those present (though only 10% of the total roster).

By the time of ESA’s Centennial in 2015, women were taking a fuller place in leadership roles, although minorities continued to be underrepresented. With women approaching 37% of those present in this photo, they are now more than 18% of the total presidential roster for this period, and are taking on a variety of other elected roles as well.

Women members of ESA by age

“ESA collected age information from its members during surveys in 1991 and 2005. In 14 years, the percentage of women in ESA increased from 23 to 40%. The percentage of women increased in almost all age classes, exceeding 50% for women at the earliest career stages.” — CS Tysor & SL White, “The Ecological Society of America in the wake of three waves of feminism,” poster, 2011.

Women’s roles and recognition in ESA 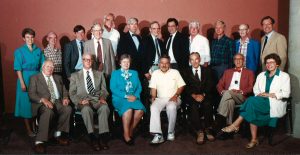