Timelines for ESA presidents are divided into two groups. The first covers presidents in office from 1916-1967. The second covers 1968-2015.

The Early Past Presidents timeline covers presidents in office from 1915 to 1967. Because they are all deceased, the entries here were developed by Dennis H. Knight, Arthur W. Cooper, and others on the Historical Records Committee, using meeting minutes and other information published in ESA’s Bulletin and Ecology.
This timeline is a work in progress, by the Historical Records Committee in cooperation with the Past Presidents Committee. It covers presidents in office from 1916 to 1967.

Visit the full version at Tiki-toki.com.

Developments during the terms of later presidents are presented in the Living Past Presidents timeline, which covers the period from 1968 to present. This timeline provides a summary of the each president’s view of the most significant accomplishment or event during his or her term of office. For those past presidents within the timeframe who were deceased before this project began, we provide links to available information.
Note: This timeline is a work in progress, by the Past Presidents Committee, under the direction of Dr. Jean H. Langenheim. It provides the perspectives of presidents from 1968 to 2015 on the events and accomplishments of their time in office.

Visit the full version at Tiki-toki.com. 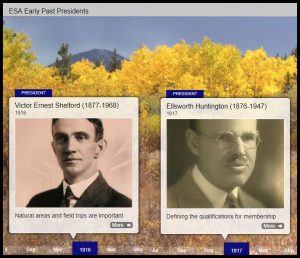