In a race for Cheetos, magpies win, but crows steal

Black-billed magpies and American crows, both members of the clever corvid family of birds, have adapted comfortably to life in urban and suburban communities. In Jackson Hole, Wyoming, the two species often nest nearby each other in backyards and parks. Nesting near their much larger crow cousins affords magpies a margin of extra safety from a common enemy—ravens, an even larger corvid species.

Magpie explores a Cheeto puzzle from Ecological Society of America on Vimeo.

“Ravens are notorious nest raiders,” said Rhea Esposito, an educational program leader at the Cary Institute of Ecosystem Studies. During her doctoral work at the University of Louisiana at Lafayette, Esposito studied how birds associate during nesting season. Smaller birds sometimes nest near larger species to benefit from their more aggressive defense against predators. Research has tended to focus on the protection side of the relationship. But what about competition? Do magpies pay a food penalty for nesting near larger rivals? Or do the smaller birds compensate with bold pursuit of new food sources? 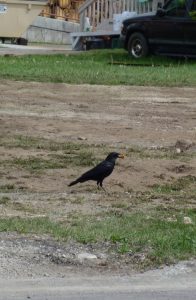 To find out which of the two corvids were more intrepid snack scouts, Esposito presented breeding pairs with a set of Cheetos challenges. She presented her results on Thursday, 11 August 2016 at the 101st Annual Meeting of the Ecological Society of America in Fort Lauderdale, Florida, during a session on animal Behavior.

“Cheetos are not the healthiest food, but the birds like them a lot,” said Esposito. “And because they are bright orange, it was really easy to observe when the birds completed the task.”

Esposito set out Cheetos near nests and settled in to watch the birds fly down to investigate. Magpies moved on the unfamiliar food an average of 20 seconds faster that crows, which eyed the orange treats with more suspicion, pausing longer before picking them up. Once having identified Cheetos as food, however, crows were more apt to steal.

“Because it’s the nesting season, they are often close enough to see neighboring Cheetos piles. So crows would learn that there is food at the nearby magpie nest, as well as their own nest. Crows steal more often than magpies by a factor of three,” said Esposito.

Esposito raised the level of difficulty through several tests, ultimately hiding the Cheetos inside a hollow log. To extract the cheesy reward, the birds had to pull on a string.

“It was a really fun experiment…just a blast to watch,” said Esposito.

A simple puzzle for corvids, with Cheetos. Credit, Rhea Esposito

Magpies were bolder puzzle solvers as well, earning their Cheetos about a minute faster than crows, on average.

“These puzzles were very simple for corvid abilities. They have solved much harder problems in the lab. But this was one of the first such experiments with wild birds and I was more interested in the ecological than the cognitive questions,” said Esposito.

To follow up on the discovery angle, Esposito staged Cheetos between nests, placing them an equal 85 meters from the nesting crow and magpie pairs. Contrary to her expectations, crows and magpies made first discovery of the food piles at equal rates, and with equal speed. But she noted a familiar pattern. Crows appeared to use magpies as Cheetos scouts, waiting for the smaller birds to explore the food, then  landing and shooing the magpies off their prize. Over time, magpies gave up on getting anything and wouldn’t even land. Crows were braver when stealing, showing less vigilance for potential predators in the presence of others than when approaching food alone, perhaps because the magpies had already proven the area to be safe. But the crows may simply have been hustling to grab the loot.

“Crows are about twice the size as magpies—that’s why they are great as nest defenders. But there is a cost,” said Esposito. The magpies’ boldness in seeking out new foods did not, in the end, net them more meals.

Esposito has evidence that magpies do gain protection by nesting near crows, but choosing crow neighbors does not improve their overall success at producing offspring. She suspects that the cost in lost food opportunities balances the greater safety offered by the proximity of the bigger birds. Figuring out that balance is a question for future snack research.